Okinawans rally against any deployment of Patriot missiles at Kadena Some rally-goers showed up Wednesday with red umbrellas embellished with slogans such as "No Base" and "No War. Peace." (Megan McCloskey / S&S)

Some rally-goers showed up Wednesday with red umbrellas embellished with slogans such as "No Base" and "No War. Peace." (Megan McCloskey / S&S) 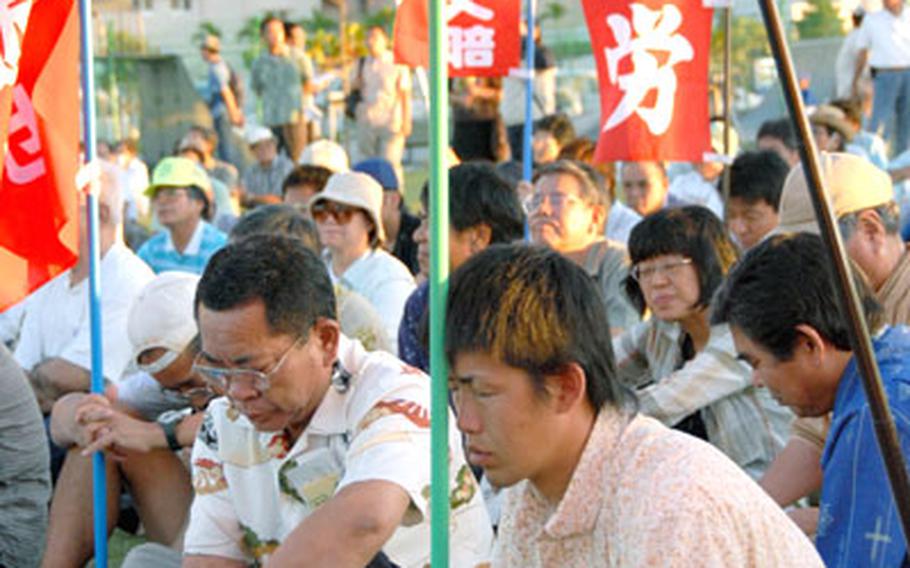 Peace activists listen intently to one of many speakers who denounced the possibility of Patriot missiles — and additional troops — coming to Okinawa. (Megan McCloskey / S&S)

CHATAN, Okinawa &#8212; About 200 residents, local leaders, labor-union members and peace activists gathered at a park near Kadena Air Base on Wednesday to stage a quiet protest based on as-yet unconfirmed Japanese media reports that Patriot interceptor missiles are to be housed at the base.

Participants took turns voicing concerns to the crowd about the deployment plan, which the Japanese government was expected to announce formally today.

&#8220;The U.S. and Japanese governments are plotting to enhance the function of Kadena Air Base by deploying 24 Patriot missiles,&#8221; said Shiko Sakiyama, a rally organizer. &#8220;We should never allow the attempt by both governments to make Kadena a front-line missile base.&#8221;

Kadena Air Base officials have referred requests for comment to U.S. Forces Japan officials. Wednesday, USFJ public affairs officials said they had no comment on whether the Patriot Advanced Capability-3 missiles will be housed at Kadena.

That the inteceptor missiles would be brought to Japan was announced May 1 as a part of the agreement to realign U.S. troops in Japan, but no specific destination was given.

When Japanese media reported early this month that the missiles would go to Kadena, officials from surrounding municipalities were quick to protest.

At Wednesday&#8217;s rally, Seiyu Nakamura, one of the organizers of the event, criticized the Japanese government. He said the plan would go against promises it made to Okinawans about realignment efforts.

&#8220;The highlight of realignment was supposed to be a reduction of the burden imposed on Okinawa," he said. &#8220;But look what is happening now. Far from being reduced, operations of the air base would strengthen &#8212; this is the reality of realignment.&#8221;

Setsuko Ishikawa, 62, joined the rally with her neighbors, saying, &#8220;I absolutely oppose missiles coming to Kadena.&#8221; As her two neighbors vigorously nodded their heads, she added, &#8220;It will make Kadena an enemy target.&#8221;

Others expressed concern about the missile system&#8217;s safety.

&#8220;No matter how advanced and sophisticated the Patriot missile may be, its interceptor capacity will not be 100 percent reliable,&#8221; said Seishin Yogi, who also lives in Sunabe district. &#8220;What if it misses the target? I saw on TV many of such cases during the Gulf War.

Megan McCloskey contributed to this story.