Participants in Sunday&#39;s rally at Okinawa International Univerity stop by the school&#39;s Administration building to view the blackened end where a helicopter clipped the building and crashed, bursting into flames. More than 30,000 people attended the rally, said Ginowan city officials, who hosted the event. (David Allen / S&S)

Participants in Sunday&#39;s rally at Okinawa International Univerity stop by the school&#39;s Administration building to view the blackened end where a helicopter clipped the building and crashed, bursting into flames. More than 30,000 people attended the rally, said Ginowan city officials, who hosted the event. (David Allen / S&S) 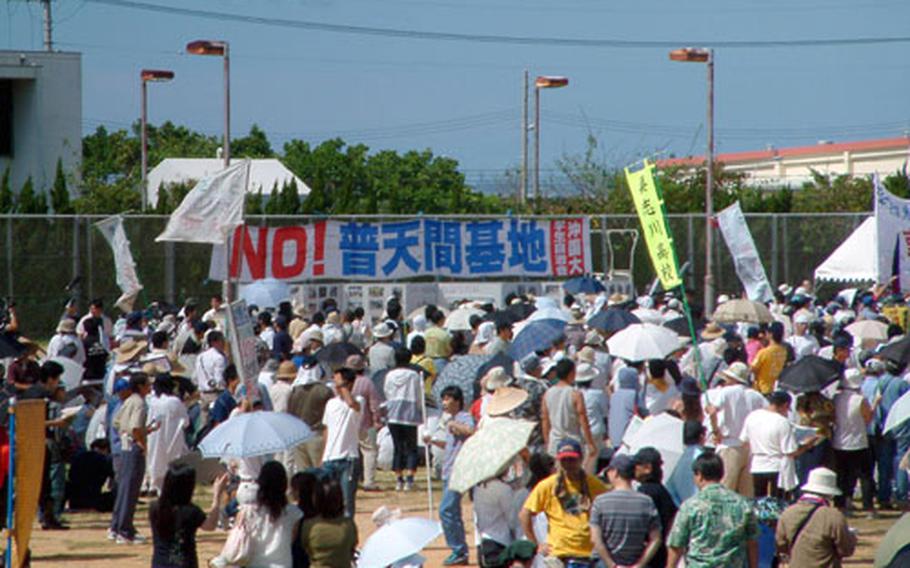 Dozens of banners like this one, stating, "No to the Futenma Air Station," were on display on the athletic field at Okinawa International Univerity during a protest Sunday. The event was sponsored by the city of Ginowan, whose mayor has called for early closure of the air base following a crash of a Marine helicopter at the university Aug. 13. City officials said some 30,000 people attended the rally. (David Allen / S&S) Some umbrellas used to escape from Okinawa&#39;s blazing midday sun carry mesages, such as these urging Ginowan city become a "No Fly Zone." (David Allen / S&S)

GINOWAN, Okinawa &#8212; Thousands of Okinawans thronged the athletic field at Okinawa International University on Sunday to protest the Aug. 13 crash of a Marine helicopter on the school&#8217;s grounds.

At times, the cheers and applause of the crowd drifted over the fence of the adjacent Futenma Marine Corps Air Station, home of the CH-53D Sea Stallion heavy lift helicopter that crashed on its way back to the base. The rotors clipped the school&#8217;s administration building and the helicopter crashed and burst into flames.

The three crewmen were rescued before the flames engulfed the wreckage. All three, based out of Hawaii and on Okinawa for six months of training, were treated at the U.S. Naval Hospital on Camp Lester. All three have been released.

No civilians were injured in the crash, but debris was scattered over a wide residential area and the incident renewed calls for closing the base, located in the middle of urban Ginowan.

Two hundred white doves were released from the rally stage at 2:18 p.m., marking the moment when the helicopter crashed and beginning the two-hour event.

Yoichi Iha, Ginowan&#8217;s mayor and the rally&#8217;s organizer, said the crash made the danger real to the city residents who live under the roar of rotors and aircraft engines.

&#8220;For our residents, the noise of military aircraft has always been nuisance but now it is a realistic terror,&#8221; Iha said. &#8220;We must take the accident as the final warning about the danger of the air station. Should another accident occur, it is easy to imagine that it would cause heavy casualties.&#8221;

He noted that debris from the stricken helicopter was strewn about 328 yards from the crash site in a heavily populated area, damaging 26 homes.

&#8220;It was indeed a miracle that no student or resident was injured in the accident,&#8221; he said. &#8220;To protect life and ensure a peaceful living environment for each resident, flight operations at the air station must be immediately suspended.&#8221;

Iha, who spent part of the summer in the United States lobbying for an early closure of MCAS Futenma, said the deadline is long past for moving Marine air operations elsewhere.

In 1996 the United States and Japan agreed to close the base within seven years once an alternate site for Marine air operations could be found on Okinawa. Political arguing and anti-base protests have delayed construction of a new airport in rural northeast Okinawa.

&#8220;To make the situation worse, in the past few years, flight activities have been remarkably increased and the helicopter fleet is aging,&#8221; Iha said. &#8220;The danger posed by the air station is far greater now than at the time the closure agreement was made.&#8221;

Contacted Sunday night, Marine spokesman 2nd Lt. Antony Andrious said the Marine Corps &#8220;has always been an advocate of the relocation of MCAS Futenma once a suitable alternate site is available.&#8221;

&#8220;We are also extremely apologetic for the anxiety that this incident has caused the people of Okinawa and the residnts of Ginowan,&#8221; he added. &#8220;We are very delighted &#8230; with the cooperation that now exists between the Okinawa Prefectural Government and the U.S. government in doing a joint property damage assessment.&#8221;

Tomoaki Toguchi, president of the Okinawa International University, called for the air station&#8217;s immediate closing, stating the crash &#8220;was a terrible disaster.&#8221;

&#8220;The lives of our students, faculty and citizens were threatened and the university&#8217;s autonomy was invaded under the name of the status of forces agreement,&#8221; he said.

Ginowan and university officials have protested how the U.S. military handled the incident. The crash site was controlled by the Marines until all the wreckage was removed; local authorities were not allowed to examine anything taken from the site.

&#8220;The situation surrounding the air station today is beyond the limit of our patience,&#8221; Toguchi said.

Waskow has defended the Marines&#8217; actions after the crash. Speaking Aug. 26 at the Japan National Press Club in Tokyo, he referred to the U.S.-Japan Status of Forces Agreement, which gives the U.S. military control of the sites of accidents occurring while servicemembers are on active duty.

&#8220;Our response was conducted precisely within the confines of the agreements we have with the government of Japan,&#8221; Waskow said. &#8220;I would like to assure you that the U.S. has cooperated fully with local authorities throughout the entire process.&#8221;

Sunday, however, many people in the crowd explained the fears they have from living so close to an air base.

&#8220;It gives me the chills to think that it could have been my house where the helicopter crashed,&#8221; said a 23-year-old man who lives in Ginowan. He identified himself only by his family name, Chibana.