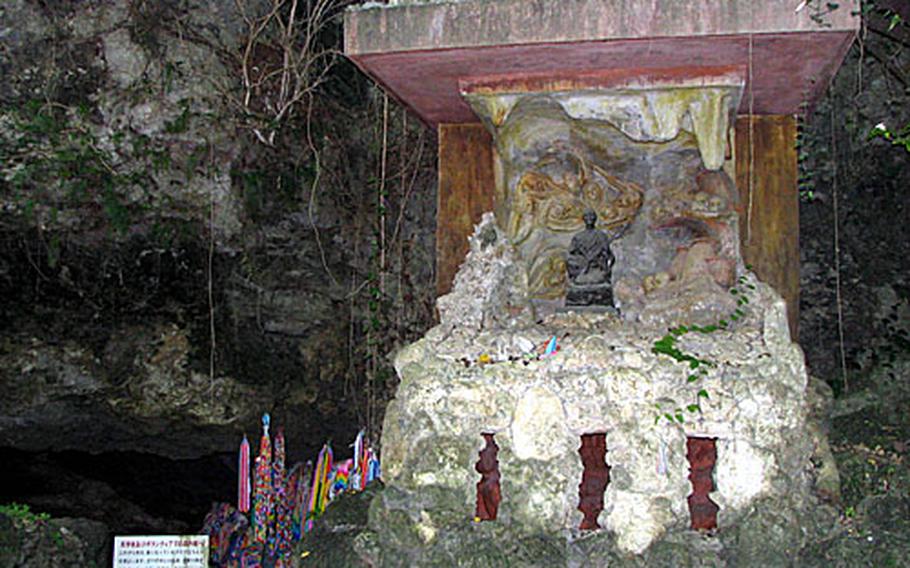 The bottom of the monument at a Yomitan "sucidie cave" called Chibichiri Gama was vandalized by right-wing nationalists and walled up to protect it from further damage. Of the 140 peoplewho hid in the cave when the Americans landed 62 years ago, 84 took their lives. (pnw# 61p cs) (David Allen / S&S)

The bottom of the monument at a Yomitan "sucidie cave" called Chibichiri Gama was vandalized by right-wing nationalists and walled up to protect it from further damage. Of the 140 peoplewho hid in the cave when the Americans landed 62 years ago, 84 took their lives. (pnw# 61p cs) (David Allen / S&S) 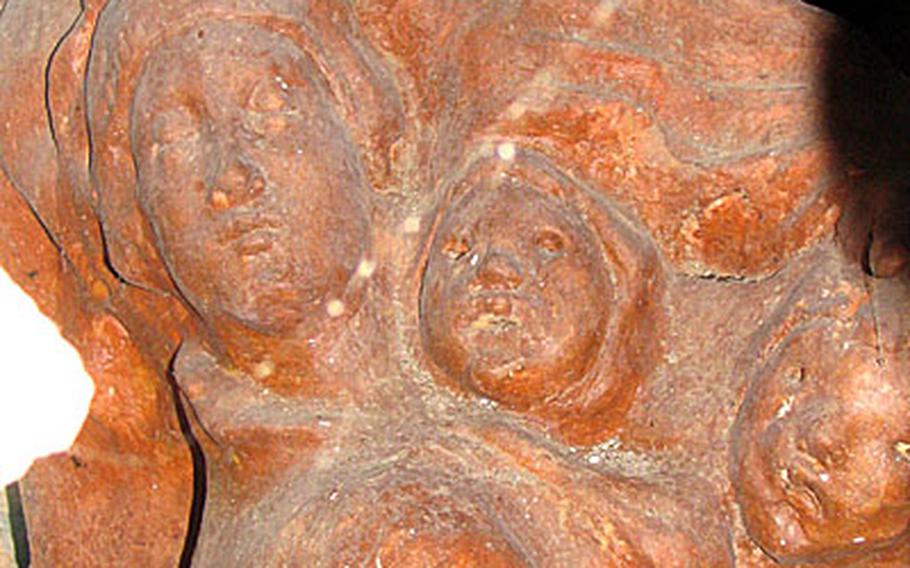 A statue of an Okinawan mother and child inside a walled-off monument to civilians who were convinced to commit suicide rather than surrender to American invasion troops 62 years ago. The monument was vandalized by right-wing Japanese nationalists in 1987 because they said it embarrassed the emperor. (David Allen / S&S)

CAMP FOSTER, Okinawa &#8212; Exactly 62 years after the start of the Battle of Okinawa, another battle is shaping up here.

Last weekend the Japanese Ministry of Education instructed publishers of school textbooks to alter descriptions of the mass suicide of Okinawa civilians during the battle. The order included eliminating all references to the Japanese military&#8217;s direct role in the tragedies, erasing accounts in earlier texts that claimed the Imperial Japanese Army instructed Okinawans to kill themselves rather than submit to U.S. invaders.

&#8220;There are divergent views of whether or not the suicides were ordered by the army and no proof to say either way. So it would be misleading to say the army was responsible,&#8221; said Yumiko Tomimori, an official in the Education Ministry.

The news drew outrage from Okinawans who claim the government is bent on whitewashing history. The ministry&#8217;s decision came on the heels of denials from politicians in Tokyo that women throughout Asia were forced to serve in Japanese military brothels.

For years, Okinawa teachers have fought to prevent school textbooks from glossing over that hundreds of civilians committed suicide during the battle, many of them reportedly with grenades Japanese soldiers distributed specifically for that purpose.

University of the Ryukyus professor Nobuyuki Takashima, a member of the Association to Not Allow the Distortion of the History of the Battle of Okinawa, said the education ministry is pushing &#8220;their one-sided historic perspective that the mass suicide was beautiful death of residents who died in the love and loyalty to their nation.&#8221;

The association planned a protest rally in Naha on Friday night.

Takashima and others believe the ministry&#8217;s move was prompted by a lawsuit in which the former commander of the Japanese army garrison in the Kerama Islands, part of the Okinawa chain, is suing the publisher and author of a book charging the military was directly responsible for some of the suicides. The defamation lawsuit, filed in 2005, included a book by Nobel Prize laureate Kenzaburo Oe, who wrote about mass suicides in the Kerama Islands, located just west of the main island of Okinawa.

It&#8217;s a charge supported by many residents of the Keramas.

Nobuaki Kinjo, 80, is one of the survivors. In 2001 he told Stars and Stripes that he was 16 years old living on Tokashiki Island when the Americans invaded the Keramas on March 26, 1945, in preparation for the April 1 landing on the main island of Okinawa.

He said that in a state of insanity fueled by the propaganda of Japanese soldiers, he killed his mother and two siblings in a mass suicide the day the Americans invaded.

Some 329 bodies were later counted in a valley where the villagers pulled the pins on hand grenades passed out by soldiers. He said he survived the mass suicide only because he was convinced by other teens that they should die a &#8220;more glorious death&#8221; by attacking the Americans. They were armed with sticks, but became disheartened when they came across some Japanese soldiers.

&#8220;Besides the issuing of hand grenades, what else do you need to prove the army was responsible for the mass suicides?&#8221; asked Kosei Yonemura, 77.

Yonemura, former chief of the Okinawa Board of Education, is from Aka Island, one of the Keramas, and fought with the Japanese Imperial Army in the Boys&#8217; Volunteer Brigade when U.S. forces landed. He was 15 years old.

&#8220;The residents in Zamami were driven to commit mass suicide,&#8221; he said. &#8220;The cause of the tragedy was militarism and nationalistic education. In those days, the Japanese people had been indoctrinated to choose a graceful death by cutting their lives short rather than exposing themselves to humiliation by enemies.&#8221;

He called the Ministry of Education&#8217;s argument that there may have been no written or historically proven oral order to commit suicide &#8220;ridiculous.&#8221;

&#8220;Such an argument is nothing but an effort to trivialize the irrevocable fact that the mass suicides were a result of the militaristic education of the day,&#8221; he said. &#8220;We must raise our voices so that Japan today does not follow the same path it went down in the past.&#8221;

Toshiaki Shinjo, a teacher at Ginowan High School, told the Okinawa Times that the textbook changes skew the telling of the Battle of Okinawa.

By leaving out mention that the military forcefully encouraged civilians to kill themselves, &#8220;the tragedy becomes a beautiful story of people who willingly offered their lives to the nation,&#8221; he said.

Controversy is nothing new

CAMP FOSTER, Okinawa &#8212; Recent outrage over Japan&#8217;s Ministry of Education&#8217;s censorship of Battle of Okinawa accounts in history textbooks is not new.

A similar controversy developed in 1999 when then-Gov. Keiichi Inamine tried to buff up the image of the Imperial Japanese Army, which, according to survivors, encouraged Okinawan civilians to commit suicide during the battle 62 years ago.

At the time, the new Peace Prayer & Memorial Exhibition Center in Mabuni had commissioned artists to design battle dioramas for the $412 million building. Some of the displays told the horror of civilians hiding in caves in Southern Okinawa in the last days of the battle.

One of the displays portrayed a Japanese soldier pointing his bayoneted rifle at a mother who fearfully clutched a baby to her bosom.

Upon learning of the display, Inamine suggested it be toned down by having the rifle removed from the soldier&#8217;s hands.

Inamine urged that the text accompanying displays also be changed. For example, the word &#8220;massacre&#8221; in the description of the massive deaths in the caves was to be changed to &#8220;sacrifice.&#8221;

But when the word got out, Okinawa Prefectural Assembly members accused Inamine of wanting to tone down history so tourists from mainland Japan would not be offended.

The original displays and written material eventually were allowed to stand. But when the gun was replaced in the soldier&#8217;s hands, it was no longer pointing at the mother and child.