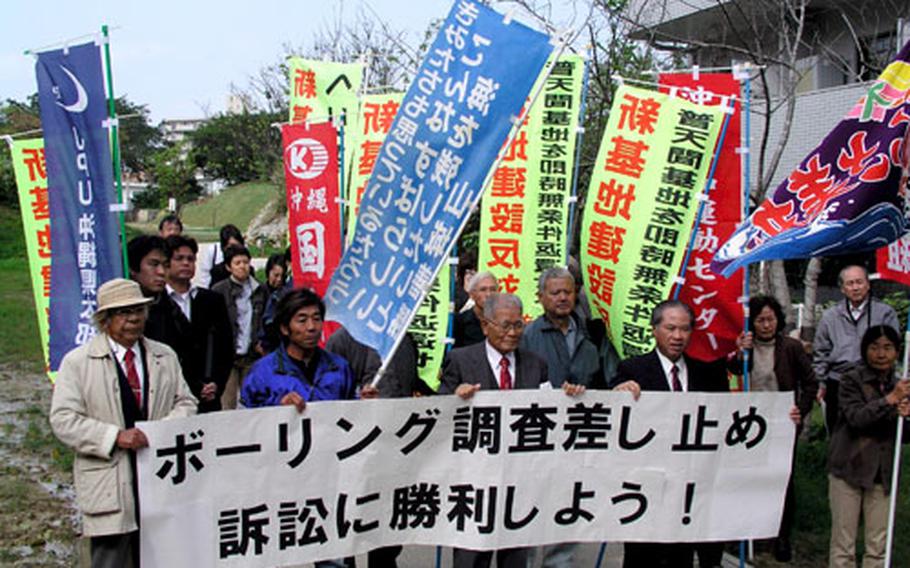 Opponents of the Marine Corps Air Station Futenma planned for the waters off Okinawa rally in front of the Naha District Courthouse on March 1. A second round of hearings in the case was held in court Tuesday. (Chiyomi Sumida / S&S)

NAHA, Okinawa &#8212; Opponents of a new Marine Corps airport off Henoko gathered Tuesday at a Naha district courtroom for the second round of hearings in their lawsuit demanding the project be stopped at once. However, they spent most of the 2.5-hour hearing criticizing events earlier that morning at Henoko.

The hearing ended with the chief judge chastising the protesters&#8217; unruliness but giving the Japanese government agency building the airport seven weeks to answer their questions about how a drilling machine came to be placed atop one of the survey platforms overnight, hours before the hearing.

&#8220;Knowing that a hearing for the lawsuit is scheduled today, the government resumed the work this morning,&#8221; Nozomu Kanetaka, among lawyers representing the residents, told the three-judge panel. &#8220;It&#8217;s a sneaky surprise attack.&#8221;

The Defense Facilities Administration Naha Bureau (DFAB) had announced Tuesday that it would restart the drilling survey. Sometime in the early morning hours, construction machines were unloaded on the platforms and a guard net was put up around them.

But the scheduled survey was suspended, a DFAB official said, after protesters climbed over the net and reached the platforms.

To try to stop construction of a replacement for Marine Corps Air Station Futenma, 97 residents, anti-military activists and environmentalists have sued, claiming the project would threaten their peaceful living environment. They argue the airport, to be built on reclaimed land, would critically harm the ecosystem and endanger sea creatures including dugongs.

The Japanese government, meanwhile, asked the court to dismiss the case, saying holes for the drilling survey would be minimal, on carefully selected spots, and would not harm the environment.

&#8220;DFAB hired 30 escort boats&#8221; to get workers to the survey platforms Wednesday, Kanetaka said, &#8220;the highest number ever. Assembling a maximum force on this court day ridicules the plaintiffs.&#8221;

Had the renewed DFAB activity not forced many plaintiffs to engage in emergency protest activities, he said, more plaintiffs could have attended the hearing. Such protesters&#8217; &#8220;right of access to courts was violated,&#8221; he said. &#8220;Why on earth was there the need for resuming the work today? We also want to know at what time was the work begun this morning.&#8221;

A defense representative replied, &#8220;We would request the plaintiffs to submit the questions in writing. We will then review the questions.&#8221;

Plaintiffs&#8217; loud objections finally drew a verbal reprimand from Chief Judge Minoru Kuboki, who ordered them to submit the questions in writing, and the government to respond, by June 20.

The next hearing is set for July 19.