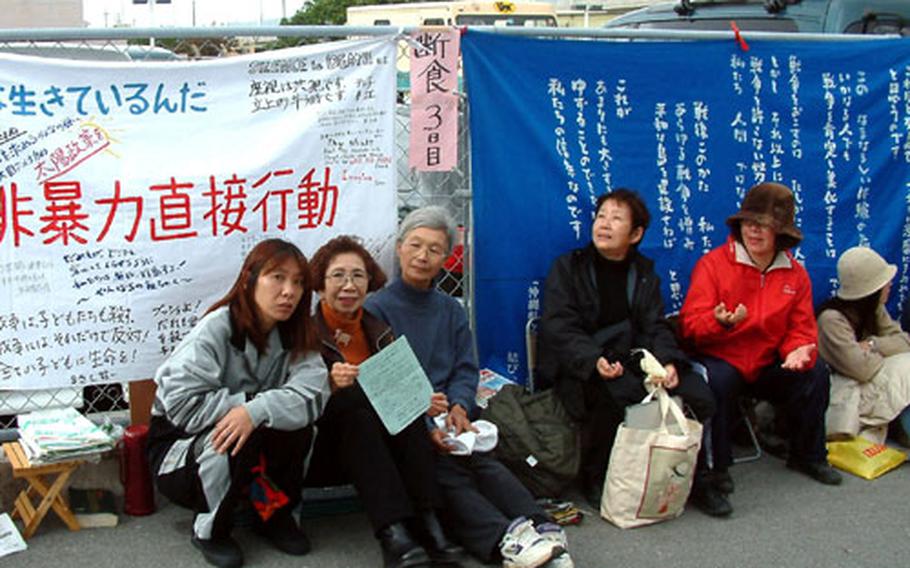 Anti-war protesters are staging a nine-day sit-in in front of the U.S. Consulate in Urasoe (pictured in background). (David Allen / S&S)

Anti-war protesters are staging a nine-day sit-in in front of the U.S. Consulate in Urasoe (pictured in background). (David Allen / S&S) Etsumi Tairahori, 69, right, is on a hunger strike and nine-day sit-in at the U.S. Consulate in Urasoe to protest the looming war in Iraq. Joining her is Yoko Kitajima, a tourist from Nagoya. (David Allen / S&S)

URASOE, Okinawa &#8212; Etsumi Tairahori, 69, spends bone-chilling January nights in a sleeping bag on a sidewalk outside the entrance to the U.S. Consulate here in a round-the-clock protest of the possible war in Iraq.

She plans to stay there until Jan. 21 when a group of other Okinawans returns from Baghdad after a weeklong trek for peace.

The Okinawans are part of an increasingly active anti-war movement in Japan aimed at protesting a possible U.S.-led attack on Iraq. On Saturday, thousands were expected to rally throughout Japan as part of a worldwide anti-war protest.

The focal point of Japan&#8217;s protests was in Tokyo, where 10,000 people were expected to march through the Ginza district, followed by a rally and concert at Hibiya Park featuring Shokichi Kina, an Okinawan musician and longtime peace activist.

On Okinawa, a rally was scheduled for Chatan Stadium, followed by a peace walk to the main gate of Kadena Air Base on Highway 58. A demonstration in front of the gate was set for 2:30 p.m.

The focus of the protests in Japan, organizers say, is Japan&#8217;s increasing involvement in the U.S.-led war on terrorism. Japan Maritime Self-Defense Force ships have been sent to the Indian Ocean to refuel U.S. and British warships, and Japan has promised to contribute to the rebuilding of Afghanistan and Iraq, if a war does break out there.

&#8220;The Japanese government says it will contribute to the reconstruction of Iraq following a war and is trying to get NGOs (nongovernmental organizations) in on the plans,&#8221; said Maki Sato, a member of the No-War Network and the Japan Internatinal Volunteer Center.

Tairahori, a gray-haired, frail-looking woman, is used to her sidewalk spot at the entrance to the U.S. Consulate on Okinawa. She&#8217;s been there every Friday for 76 weeks as a protest against the U.S. military presence on Okinawa. Her sit-in began after an Air Force staff sergeant raped a Japanese woman in the American Village shopping complex in Chatan.

She started a separate nine-day sit-in and hunger strike Jan. 13, the same day a delegation of seven Okinawans flew to Baghdad to join hundreds of anti-war activists in a show of solidarity with the Iraqi people. Representatives of international NGOs were expected to gather Friday in Baghdad.

The Okinawa-Baghdad contingent is distributing leaflets in Arabic and English explaining how they can sympathize with the Iraqis due to their own experience in World War II, when Okinawa was decimated during an 82-day battle that claimed the lives of one-third of the island&#8217;s civilian population.

&#8220;Two members of our group joined the others from Okinawa on the trip to Baghdad,&#8221; said Tairahori, a member of the Okinawa Women&#8217;s Voice Network. &#8220;And two others are on their way to Washington to participate in a protest rally there. We have to do whatever we can do at this moment to deter the war.

Nine other protesters accompanied Tairahori. They sat along a fence hung with banners in Japanese and English that informed passers-by of their protest. A sign in English taped to a utility pole urged Americans to join them.

&#8220;We are not supporting Saddam Hussein by protesting against war, nor do we see the United States as our enemy,&#8221; said Yoko Yamaguchi, 62, who sat next to Tairahori, knitting to pass the time.

&#8220;We just do not want another massive killing to occur,&#8221; she said. &#8220;Many innocent children and civilians in Iraq will be sacrificed and U.S. servicemembers, too, will become victims.

&#8220;The Gulf War is still fresh in our memories,&#8221; she said. &#8220;Some servicemembers who participated in that operation still suffer from Gulf War Syndrome. How many times do we have to repeat that tragedy?&#8221;