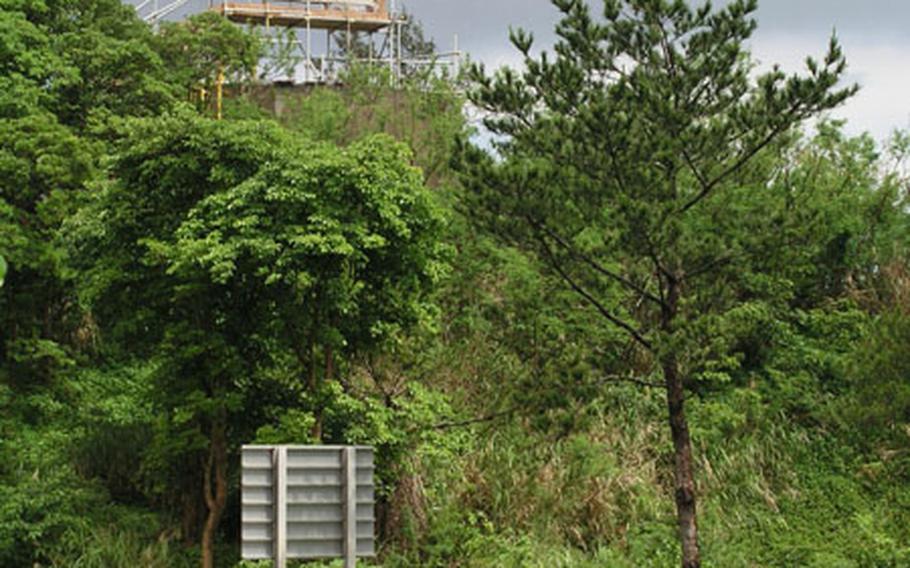 An observation tower sits atop a water tank in Igei community in Kin. Residents erected the tower in a protest against a new U.S. Army urban combat training complex planned at Range 4 on Camp Hansen. The observation tower overlooks the training area on the farther side of the Okinawa Expressway. (Chiyomi Sumida / S&S)

CAMP HANSEN, Okinawa &#8212; Construction for a new urban combat training complex at Camp Hansen&#8217;s Range 4 will begin this month, according to a Nagasaki-based construction firm awarded the contract earlier this year.

Local residents watched from an observation tower perched on a water tank as company workers erected a temporary office at the site last week. Okinawa officials have indicated they were upset that they received no prior notice before construction began.

A company spokesman said the complex would be finished by April 2005.

Opponents of the training complex, who claim it will bring added noise to their neighborhoods, built the observation tower. Kin town officials and residents of the Igei community, next to the base, held an emergency meeting Tuesday and vowed to intensify their protest activities.

&#8220;If building materials have been transported to the site as reported, such activity is against the will of local residents and people of Okinawa,&#8221; said Reiji Fumoto, director of the Governor&#8217;s Office. &#8220;We will work together with the Kin municipal government to oppose this project.&#8221;

The complex, Army officials have said, is designed to replace an older training complex at another Camp Hansen site; it will combine training now being conducted by the Army&#8217;s 1st Battalion, 1st Special Forces Group on camps Hansen and Schwab.

The Special Forces Group is based at the Army&#8217;s Torii Station facility, where space is limited.

In November, U.S. and Japanese officials confirmed that the U.S. Defense Department was funding construction of the facility, which is to include a &#8220;shoot house,&#8221; breaching bay, 50-meter flat shooting range, rappelling tower and an administrative area.

U.S. officials say the new complex is designed to minimize impact on its neighbors with measures such as soundproof walls and use of a special absorbent material inside a building to prevent stray shots. Also, training would be scheduled to avoid early morning and late night hours.

Gov. Inamine has said he opposes the new complex because he fears it would &#8220;contribute to the perpetration of the U.S. bases on Okinawa.&#8221;

Sadaaki Numata, ambassador in charge of Okinawan affairs of the Ministry of Foreign Affairs, said U.S. Forces Japan informed him Tuesday the construction company was to begin preparing the site for the project.

&#8220;Under our bilateral agreement, the U.S. military has the right to build necessary facilities with their own funds within military installations and areas,&#8221; Numata said. &#8220;We understand that the relocation of the training facility is a result of U.S. military giving consideration to safety. We hope that the construction will be smoothly accomplished.&#8221;