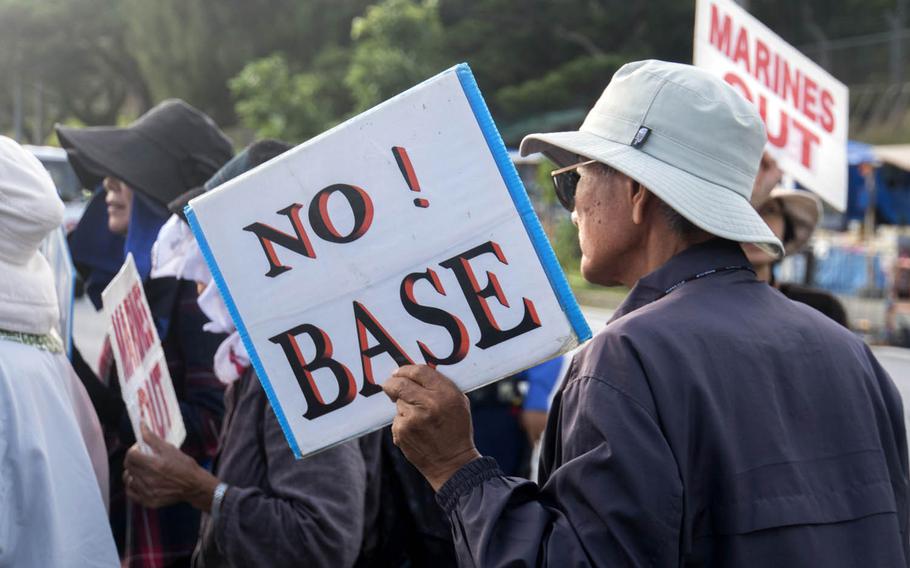 Buy Photo
President Donald Trump's inauguration brings anti-base activists on Okinawa a glimmer of hope for changes to U.S. policy that could possibly halt base construction plans decades in the making. (Jessica Bidwell/Stars and Stripes)

Buy Photo
President Donald Trump's inauguration brings anti-base activists on Okinawa a glimmer of hope for changes to U.S. policy that could possibly halt base construction plans decades in the making. (Jessica Bidwell/Stars and Stripes) 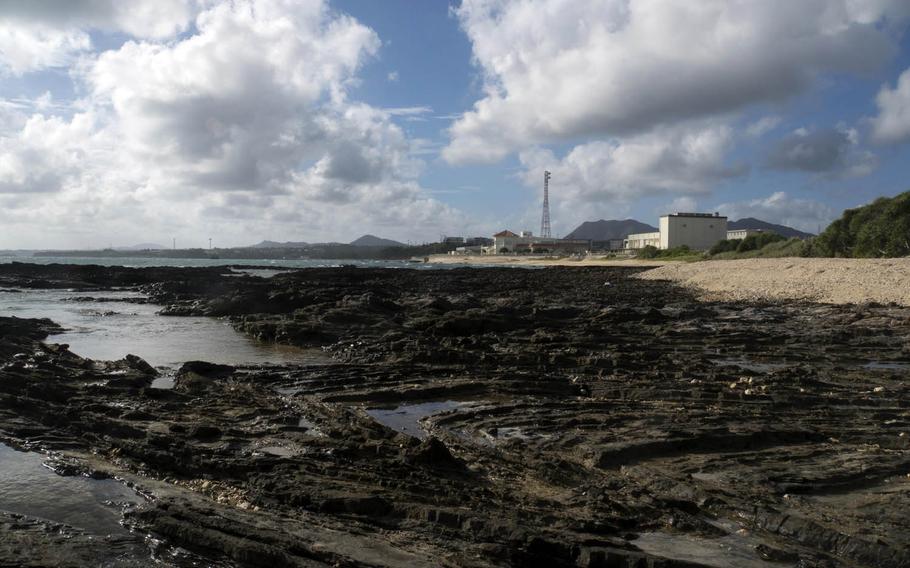 A runway is being built at Camp Schwab to facilitate Marine Corps Air Station Futenma's relocation from busy central Okinawa to the rural north. (Jessica Bidwell/Stars and Stripe)

CAMP FOSTER, Okinawa — Okinawa’s governor plans to travel to Washington to lobby the new White House administration against relocation plans for a U.S. air base within the southern island prefecture.

The election of Donald Trump brought supporters of Gov. Takeshi Onaga and anti-base activists a glimmer of hope for changes to U.S. policy that could halt base construction plans decades in the making.

Onaga will arrive Jan. 30 and stay until Feb. 4, said a spokesman for the Okinawa Prefectural Government’s military affairs office. Onaga plans to meet with senior officials of the state and defense departments and members of Congress, although the meetings have yet to be scheduled. The governor will voice his opposition to moving Marine Corps Air Station Futenma from busy Ginowan to the island’s remote north. He also plans to speak at a symposium at George Washington University on Feb. 2.

It’s unlikely he’ll get an audience with Trump; typically, presidents meet with other heads of state on matters regarding bilateral relations. This is Onaga’s third U.S. lobbying trip since he took office in 2014.

His campaign-trail demands that Japan pay more than the billions it is spending on U.S. military bases and realignment aren’t being taken seriously by some in Japan’s ruling government.

Diet member and former Defense Minister Shigeru Ishiba, who said he met with Trump national security pick Michael Flynn before the election, told reporters in November that increasing Japan’s security duties might be possible. Such measures could require reshuffling the nation’s defense budget or increasing it beyond the relatively small hikes it has seen within the past few years.

Meanwhile, an unnamed Trump adviser told Reuters recently that several China deterrence measures are on the table, including expanding the U.S. military presence in Japan and Australia.

‘America First’ Critics of the U.S. force posture on Okinawa have seized on Trump’s domestic emphasis as a signal that he could roll back current plans.

Trump’s “core policy is what is best for America’s interests,” said Masaaki Gabe, a professor of international relations at the University of the Ryukyus in Okinawa, who favors a lesser U.S. presence. “Alliance is of least interest to him, so if Japan does not meet his demand to increase its financial contribution, the situation on Okinawa might change.”

Gabe said that if Japan does not agree to pay more for U.S. security, fewer Marines could remain on Okinawa. In their place could be more Japan Self-Defense Forces — something that would please Prime Minister Shinzo Abe, a conservative who favors a stronger Japanese force.

“The ultimate change I want to see, like the majority of Okinawa’s people, is that the plan to build a new runway at Henoko is dropped,” Gabe said, referring to an under-construction airstrip that will facilitate the move.

Gabe said that while most Okinawans want to halt the relocation in favor of moving Futenma off the island, they do not want the U.S. military gone completely.

This is an important distinction, coming on the heels of a December report by Japan’s top spy agency saying China seeks to sow discontent with Tokyo on Okinawa and eventually sever the island prefecture from the mainland, perhaps in independence.

Okinawans still weary over World War II don’t want to become a focal point should war break out in the region.

“Concentration of military bases makes Okinawa an enemy target, and Okinawa would become a sacrificial stone like it was in WWII,” said Takuma Higashionna, an environmentalist, anti-base activist and member of the Nago City council. “‘America First’ is what Mr. Trump has said during the campaign. If so, I want him to not keep his troops in a place where they are not welcome.”

Higashionna said the relocation — if forcibly carried out – will lead to an independence movement, not Chinese meddling.

Gabe doesn’t believe such a movement is possible in the present political climate, because most Okinawans don’t want to change their Japanese identity. Only 8 percent favored independence in a 2015 poll by the Ryukyu Shimpo, an Okinawa newspaper generally opposed to the U.S. presence.

China fears Opinions about American bases and a wish list for Trump change the farther south you go in Japan.

Yoshitaka Nakayama, mayor of Ishigaki — an island about 250 miles south of Okinawa’s main island and 150 miles from Taiwan’s east coast — said he wants the U.S.-Japan alliance to remain strong under Trump.

“I ask the new [U.S.] government to make it clear once again that the bilateral security pact covers the Senkaku islands,” he said.

Secretary of State nominee Rex Tillerson reaffirmed a commitment to defend the Senkakus, which are administered by Japan but claimed by China, during confirmation hearings last week.

“While there are voices against deployment of the MV-22 Ospreys on Okinawa, I believe that the aircraft is vital to protect the Senkaku islands with its flight range, speed and transport capacity,” Nakayama said. “So far, [Chinese] ships that have invaded Japan’s territorial waters are coast guard vessels, but as their activities escalate, there is a fear that navy ships might enter the territorial waters, and eventually there could be a situation that crewmembers might land on the islands.”

Okinawans also said they wanted to see Trump address noise concerns and fears over the controversial Osprey, which has been at the center of recent crashes and incidents. They want him to pursue dialog with China to increase regional stability.

Trump’s transition team did not respond to requests for an interview with Stars and Stripes.

Trump’s focus on topics other than Okinawa has left officials on the island examining his background, in a bid to determine what may come.

“In past administrations, policies and decisions have been made amongst bureaucrats, but Mr. Trump is not a bureaucrat, nor a politician,” said Denny Tamaki, a member of Japan’s Diet who serves Okinawa. “He is a businessman. What he takes most interest in is negotiating the best deal for the United States. He will not leave his policymaking up to bureaucrats.

“If he sees that listening to the voices of Okinawa works to the best interest of the United States, he will push for it.”