Okinawans give donation in memory of U.S. Marine 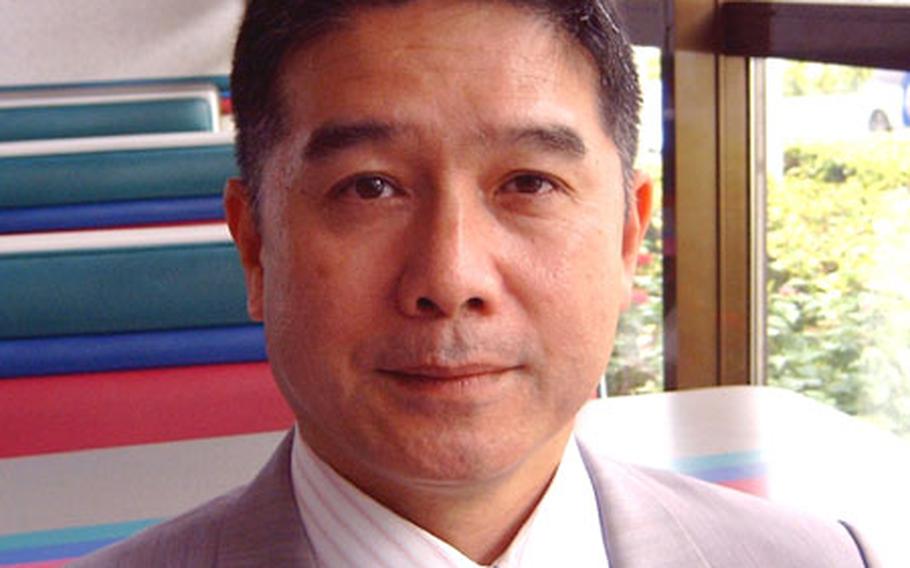 CAMP LESTER, Okinawa &#8212; The battlefield death of a U.S. Marine in Iraq also was felt by the Okinawan community.

Cawley, a Salt Lake City police officer, and his wife had planned to return to Okinawa when he retired and open a coffee shop. His death was featured in stories in Japanese newspapers and television.

Although he didn&#8217;t know the family, Ryunosoke Megumi, president of the Gloria Business School in Chatan, was touched by the reports.

&#8220;After watching a TV program and learning that Staff Sgt. Cawley&#8217;s wife was from Nago, both my students and I felt even closer about his death and the casualties of war,&#8221; Megumi said.

A strong supporter of the U.S. bases on Okinawa, Megumi, a former officer in the Japan Maritime Self-Defense Force, asked his students how they felt about Cawley&#8217;s sacrifice. They decided to contribute to the Navy-Marine Corps Relief Society in Cawley&#8217;s name.

&#8220;The students responded positively to my suggestion that we collect a token amount for the fund to express our condolence, respect and gratitude to Staff Sergeant Cawley and all the servicemembers who fell in the war on Iraq,&#8221; he said.

Thursday, Megumi and three students presented $300 at a brief ceremony at the U.S. Naval Hospital on Camp Lester.

&#8220;I think it shows everyone that there is a close relationship between the military and Okinawan communities,&#8221; Brown said. &#8220;The students said they wanted to be able to give something back to the military community to show their support for the family members of the Marines.

&#8220;In turn, we explained to them that their donation will help the family members of some sailor or Marine in need, whether it be finances to fix a car or airfare for an emergency trip back home,&#8221; he said.

Cawley had a close affinity for Japan. A Mormon, he traveled to Fukuoka at the age of 19 as a missionary for the Church of Jesus Christ of Latter-day Saints and became fluent in Japanese.

Later, as a Marine, he was stationed on Okinawa, where he met his wife, whose family lives in the northern city of Nago.

He served for 12 years before returning to Salt Lake City to be a police officer and raise his family. In 1997, he became a SWAT team instructor for the city&#8217;s gang suppression unit.

But he missed the Marines and joined the reserves in 2001, before the Sept. 11, 2001, terrorist attacks. He was called for active duty in January 2002 and his unit was sent to help with security at Camp Pendleton, Calif. He was due to return home in January, but Marines by then had extended the unit&#8217;s mobilization.

&#8220;He could have been anything but he chose to be a soldier and [police] officer because of his strong beliefs,&#8221; his sister, Deborah Seamons, told the Boston Globe. &#8220;He wanted to protect people from the bad guys and make the world a safer place.&#8221;

It was that strong call to duty that impressed Megumi most, he said.

In Iraq, Cawley made friends with a reporter with the Asahi Shimbun who was embedded with his company. Cawley&#8217;s fluency in Japanese helped the reporter in settling in.

&#8220;He helped me in many ways, from explaining the often difficult military terminology to introducing me to his comrades,&#8221; reporter Tsuyoshi Nojima wrote in a column published April 10. The two men became friends and on March 26 Cawley asked Nojima to forward a message in Japanese to his wife.

Nojima e-mailed the message to Miyuki from his satellite phone.

Cawley had been asleep on the ground at night when a firefight broke out nearby, Nojima said. A Humvee driver from another company was ordered to respond and give covering fire. In his rush, he forgot to put on his night vision goggles and ran over Cawley who, exhausted, had slept through the noise.

At an April 2 memorial for Cawley held by his company in Iraq, Nojima faced the rifle and helmet set up in the Iraqi sand and read Miyuki&#8217;s e-mail message informing him of Cawley&#8217;s death.

Cawley was buried with military honors in a Salt Lake City suburb on April 10. More than 1,700 people attended the services, including more than 500 police officers from as far away as Reno, Nev.