Okinawans elect governor who is supportive of U.S. presence 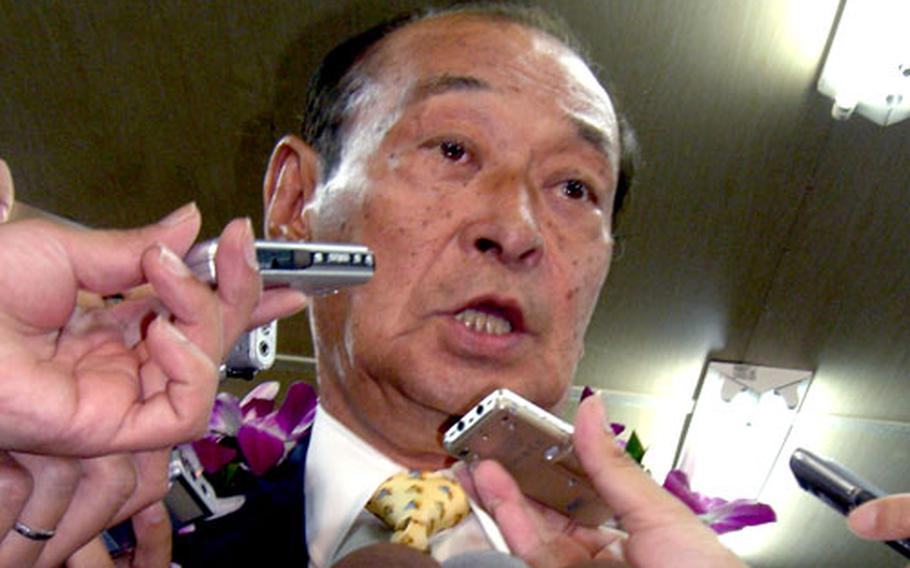 NAHA, Okinawa &#8212; Former vice-governor and businessman Hirokazu Nakaima was elected governor of Okinawa on Sunday, much to the relief of the ruling coalition in Tokyo, which supported him over an opponent of the U.S. military bases on Okinawa.

Nakaima, 67, got 347,300 votes, beating Keiko Itokazu by about 37,000 ballots in an election in which Itokazu, a 59-year-old former Diet member and tour guide, focused her campaign on opposing the replacement of Marine Corps Air Station Futenma with a new facility on Camp Schwab.

Nakaima, who said he&#8217;s against the current Camp Schwab plan but willing to negotiate an alternative with Tokyo, kept his campaign focus on plans to revitalize Okinawa&#8217;s economy. Nakaima ran with the backing of the Liberal Democratic and New Komeito parties.

The election was closely watched by officials in Tokyo and Washington as a gauge of support for the bilateral plan signed in May to realign U.S. forces in Japan. Key to the plan is to close MCAS Futenma, located in an urban center, and move Marine air operations to a new facility on the Henoko peninsula at Camp Schwab, in rural northeast Okinawa.

Coming in at a distant third Sunday was Chusuke Yara, 54, with 6,220 votes. Yara is the head of the Okinawa Independence Party, which seeks to secede from Japan.

Japan Prime Minister Shinzo Abe said he was &#8220;happy to see a good result&#8221; in the Okinawa outcome, according to news reports. Abe, who was in Hanoi, Vietnam, on Sunday for the Asia-Pacific Cooperation forum, said Nakaima&#8217;s election keeps the realignment process on track.

&#8220;We need to go forward with the realignment plan with the reduction of the burden on Okinawa residents in mind,&#8221; Abe said.

Lt. Gen. Bruce Wright, commander of U.S. Forces Japan, has said the Futenma replacement project is a key part of the realignment agreement, which also calls for transferring about 8,000 Marines and their families to Guam and closing Camp Kinser, Naha Military Port, Camp Lester and part of Camp Foster.

During the campaign, Nakaima vowed to slash Okinawa&#8217;s unemployment rate, which at 7.8 percent is nearly double Japan&#8217;s national average.

He pledged to revitalize the island prefecture&#8217;s economy by making it a major center for information technology and a major producer of ethanol fuel from sugar cane.

Nakaima said he&#8217;s not opposed to replacing MCAS Futenma with another air station, but has concerns about the current plan&#8217;s effect on nearby villages and the environment.

&#8220;I don&#8217;t support the current relocation plan, but I want to discuss the issue with a wide variety of Okinawans, and then with the central government,&#8221; he told reporters during his victory celebration.

Exit polls showed voters&#8217; concerns were split between the bases and the economy.

But many at the polling station said they voted with their pocketbooks.

&#8220;I voted for the candidate who can create more job opportunities on Okinawa,&#8221; said Nayomi Kinjo, 47. &#8220;It is important to reduce military bases here, but we have to also think about jobs of those who work on the military bases.&#8221;