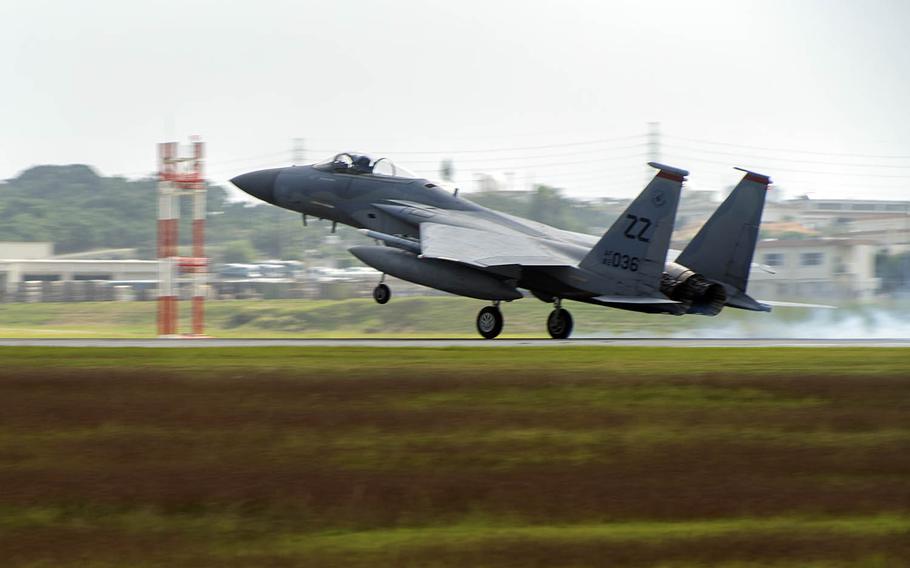 CAMP FOSTER, Okinawa — A Japanese court has awarded more than $265 million to people living around Kadena Air Base in the largest monetary settlement over U.S. military aircraft noise in the nation’s history.

The verdict was rendered Thursday by a three-judge panel from the Okinawa City branch of the Naha District Court. The judges awarded $265.9 million to 22,005 residents – about $12,000 per plaintiff – for noise beyond permissible levels.

The judges admonished the Japanese government for ignoring the situation and not taking concrete steps to curb the noise. However, they rejected demands to limit U.S. military flight operations, which the court said contribute to peace and security in the region.

The plaintiffs plan to appeal that part of the ruling.

“The court found that the noise was harmful but it cannot stop it,” said plaintiff Yoshinori Yamada, 76, outside the courthouse after the verdict. “I am outraged.”

The Japanese government can appeal the monetary award to a higher court. The Japan Supreme Court lowered the award in a similar suit over noise at Naval Air Facility Atsugi in December.

This is the third successful suit for monetary compensation over Kadena’s noise pollution. The first was filed in 1982 by 906 people. The second was filed in 2000 by 5,544 residents.

The suit ruled on Thursday was filed in 2011 by 22,054 people living in communities surrounding the air base. Some left the case because they died while pursuing litigation or were blocked because they were from the Philippines.

Some of the residents had a similar suit against the U.S. government dismissed Feb. 9, when the court determined it did not have jurisdiction. They have appealed that verdict to the Fukuoka High Court.

“While the benefits are enjoyed equally by the entire nation, the operations of the military cause various damages, inflicting a heavy toll on local residents,” Chief Judge Tetsuya Fujikura said in Thursday’s ruling. “It is a grave unfairness that cannot be overlooked.”

In all three Kadena cases, plaintiffs said monetary compensation was not their main goal. Both previous groups appealed seeking to limit flight operations, but were unsuccessful.

Aircraft noise has been a major issue on Okinawa since the end of World War II when the island fell under U.S. administration. In the past year alone, there have been multimillion dollar settlements that must be paid by the government of Japan, including one in November that saw 3,417 residents around Marine Corps Air Station Futenma receive $22.6 million.

Since the 1990s, the Japanese government has paid more than $90 million because of aircraft noise, according to the Okinawa Defense Bureau. Cases now under appeal are not included in that figure.