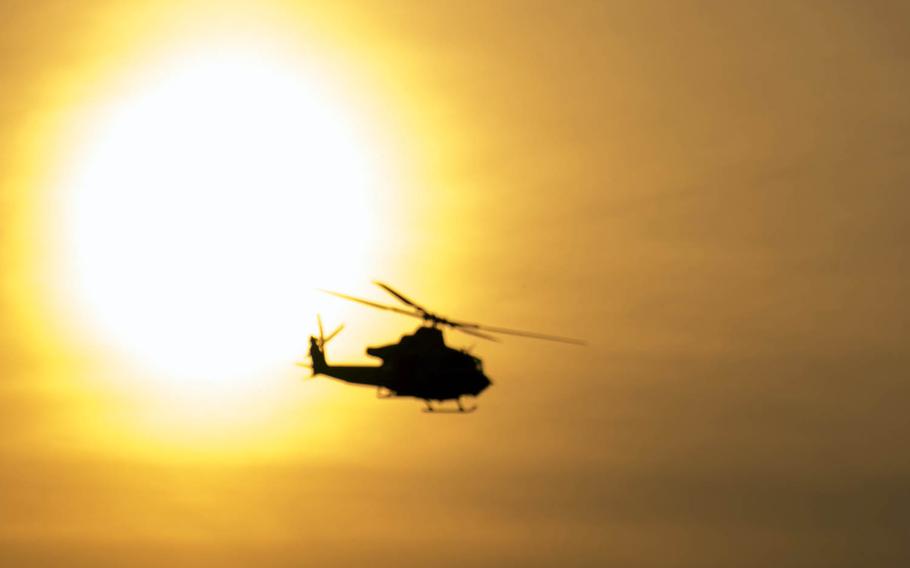 CAMP FOSTER, Okinawa — Okinawan villagers plan to file a complaint with the U.S. military after a Marine Corps aircraft dropped a tire while training this week.

A Bell UH-1Y Venom helicopter was lifting tires during external cargo lift training Wednesday when a tire detached and fell to the ground near a landing zone in a designated U.S. military training area within Okinawa’s Central Training Area, a Marine Corps statement said. No one was hurt and there was no damage to local homes, businesses or the aircraft.

Marine officials said the training is done over designated areas to ensure the local population’s safety. The mishap’s cause is under investigation.

Ginoza village officials, who claim the landing zone is near a residential area, say they will file a complaint in hopes that the training will be moved.

“We have repeatedly asked the military to avoid using landing zones that are close to residential areas,” a village spokesman said. “The closest home to the landing zone is only about 330 yard away.”

There is another landing zone within the village’s limits that is about the same proximity to a residential area, while others are much farther from the community.

“Once again, we ask the military to heed fear and anxiety of residents and conduct the training at the facilities that are farther into the mountain side,” the spokesman said.

The lift training had been suspended between Dec. 9 and Feb. 23 after residents expressed concerns after seeing helicopters carrying external cargo over the community, the spokesman said. The Marine Corps notified Okinawa’s defense bureau on Feb. 23 that it planned to resume the training.

“The Marine Corps conducts external lift training exclusively over nonresidential areas, within designated training locations,” a Marine Corps spokesman said in a statement Thursday. “This training is essential for Marine Corps pilots to execute missions such as humanitarian assistance and disaster relief.”