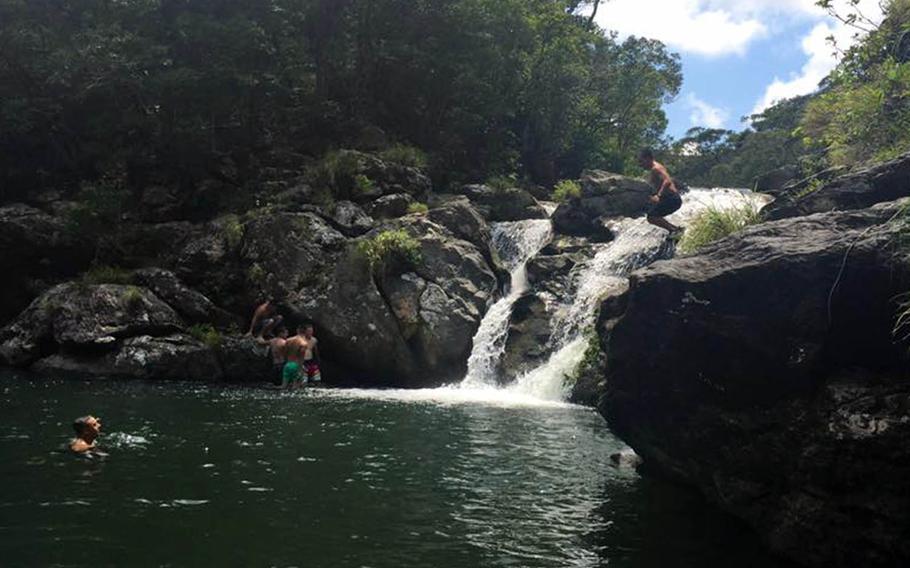 On the Okinawa BOSS Torii Station Facebook page, which is officially administered by the U.S. government organization, photos from 2015 show soldiers jumping off the rocks into the water below. (Screenshot from Facebook)

On the Okinawa BOSS Torii Station Facebook page, which is officially administered by the U.S. government organization, photos from 2015 show soldiers jumping off the rocks into the water below. (Screenshot from Facebook) 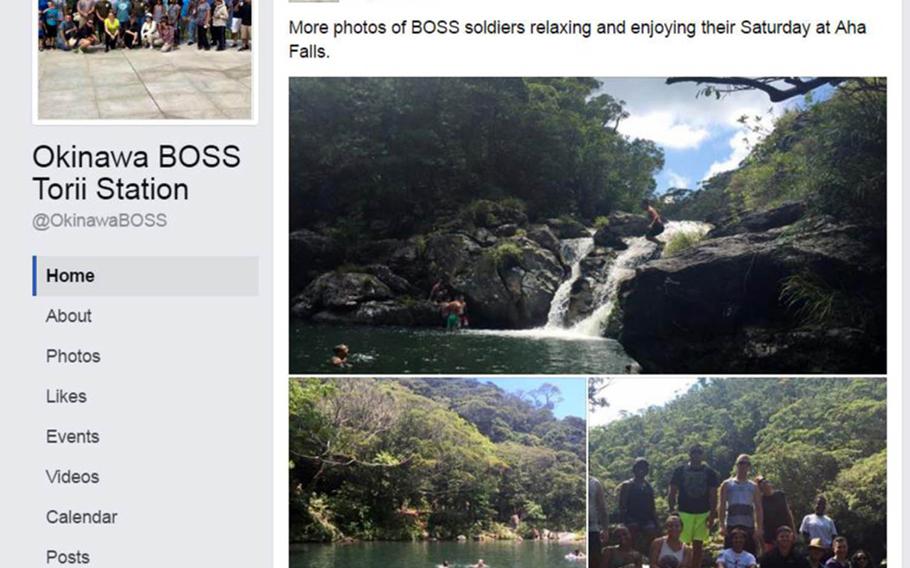 On the Okinawa BOSS Torii Station Facebook page, which is officially administered by the U.S. government organization, a post from 2015 shows soldiers jumping off the rocks into the water below at an officially sanctioned trip to the falls. (Screenshot from Facebook)

CAMP FOSTER, Okinawa — The recent death of a teenage airman at Okinawa’s Aha Falls — a spot popular with servicemembers and tourists for hiking and cliff jumping — left some local officials searching for answers.

Shannon Purcell, 19, died May 6 after slipping and falling into the Tanaga Gumui basin, Japanese rescue and fire officials said. Her death is the latest in a stream of incidents at the picturesque watering hole — including a death in 2014, near drownings, numerous broken bones and 10 falls since 2013 that caused injury and required rescue.

Officials from nearby Kunigami Village wanted to know why American servicemembers and tourists continue to flock to the natural wonder in the middle of the northern jungle. They say they don’t advertise the falls as a tourist attraction, park or recreational site, and signs warning of dangers are strategically placed. Locals, for the most part, avoid the area, they said.

“It is an area where no one should be,” said Kunigami tourism official Kosuke Miyazato. “We wonder where American people get information on the falls. Somehow, I guess, that is why they continue to go there.”

A look at U.S. military social media and tourism websites showed that some military groups have not only advertised the falls as a tourist attraction and recreational site, but have also taken servicemembers there on trips where they jumped off the rocks into the water.

Private tourism websites aimed at Americans on Okinawa also have advertised the spot.

“It is regrettable to learn that an official U.S. military website advertises the falls,” said Kunigami Village Mayor Hisakazu Miyagi when alerted to the sites by Stars and Stripes. “In response to this latest accident, I would like to urge the U.S. military to take thorough measures and not advertise the spot on official sites.”

Those sites include a map of Okinawa in the 2016 Okinawa Guide released by Marine Corps Community Services Okinawa listing the falls as a “tourist spot.”

On the Okinawa BOSS Torii Station Facebook page, which is officially administered by the U.S. government organization, a post from 2015 shows soldiers jumping off the rocks into the water below at an officially sanctioned trip to the falls.

“More photos of BOSS soldiers relaxing and spending their Saturday at Aha Falls,” the post reads.

“There is risk inherent in all outdoor recreation, which is why we routinely train all service members on proper risk mitigation practices placing special emphasis in Okinawa on water recreation,” U.S. Forces Japan spokesman Lt. Col. Ken Hoffman wrote in a statement to Stars and Stripes. “Even the most perfect risk mitigation plan, however, cannot eliminate risk entirely. We do our best to educate service members about potential dangers while giving them the opportunity to safely engage in recreational activities of all kinds.”

Hoffman said the U.S. military expects servicemembers to make smart decisions “for themselves and their families,” which includes following Japanese laws, rules, regulations and policies of the areas they visit.

After Purcell’s death, Kunigami officials reached out to the U.S. military and requested the site be placed off limits to American servicemembers, their families and support civilians, said Masanori Yamashiro of the Kunigami Village tourism office.

Village officials then blocked the path to the falls and pulled down a road sign for the Tanaga gumui plant community, a natural monument, that is unrelated to the falls but helps lead people there.

The U.S. military in Japan expects servicemembers to honor the wishes of the local community and any restrictions placed on the falls, Hoffman said.

“With regard to the Aha Falls area, we respect the ability of the community to judge local conditions and expect that our service members will honor these and any other restrictions placed on access,” he wrote.

There are no natural areas on a list of off-limits sites, which include spots known for prostitution, an abandoned hotel and smoke shops, presented to servicemembers on the island.

Local officials across Okinawa told Stars and Stripes there are a series of sites on the island that have been known to claim a high number of lives that should probably be looked at.

Kin fire officials said Onna Village’s Maeda Point, where three servicemembers died last October, has been a problem over the years with its rough seas and strong currents. Tourists have ignored warning signs and parking closures to enter the water.

The investigation into Purcell’s death is ongoing, Hoffman said.

“Airman Shannon Purcell was a valued member of Team Kadena,” he wrote. “Her untimely death affected all of us very deeply and our heartfelt condolences go out to her family.”