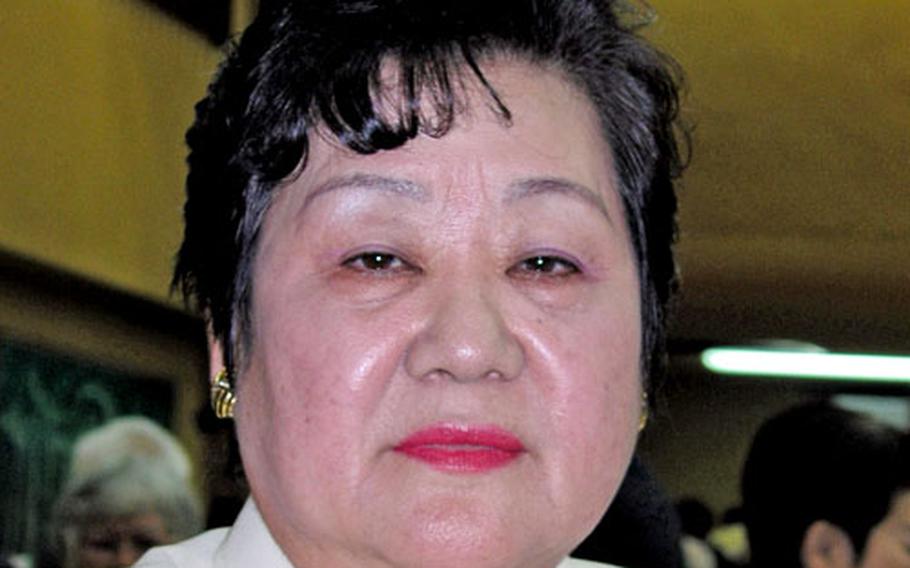 Mitsuko Tomon, a member of Japan’s House of Representatives from Okinawa, says she received a warm welcome from U.S. officials during a recent lobbying trip to Washington, D.C. (Chiyomi Sumida / S&S)

&#8220;I could feel that the ambient air in Washington was much warmer,&#8221; Okinawan Mitsuko Tomon of Japan&#8217;s House of Representatives said here Sunday.

The reception was far more favorable than expected, said Tomon, who once taught Japanese language and culture at Kubasaki High School on Camp Foster. She mentioned especially what she called words of support from Kurt Campbell, a former deputy assistant secretary of defense now with the Center for Strategic and International Studies.

Officials in Washington also characterized the session as cordial.

The talks are &#8220;part of the Defense Policy Review Initiative,&#8221; said Navy Cmdr. Greg Hicks, a Pentagon spokesman. The Japanese officials met with &#8220;the DOD-Japan policy team, who answer to Richard Lawless, the deputy undersecretary (of Defense) for Asian and Pacific Affairs.&#8221;

Crediting the Aug. 13 crash of a Marine helicopter from Futenma into adjacent Okinawa International University, she said, &#8220;Now everybody shares the common understanding that the air station is dangerous. On past lobbying visits, the dominant atmosphere was rather cold and we were often told that we should be going to Tokyo, not Washington.&#8221;

The Okinawa officials are demanding the United States cut its troop presence on Okinawa, particularly the some 17,000 Marines of the III Marine Expeditionary Force. They want immediate closure of Futenma and abandonment of the new air station planned for Henoko, to take Futenma&#8217;s place.

In 1996, the U.S. and Japan agreed to close Futenma once an alternate Marine air operations site was found. In 2002, plans were approved to build an airport on reclaimed land about two miles offshore but connected to the Marines&#8217; Camp Schwab. But environmental and anti-base opposition has prompted Japanese officials to estimate completing the base, to be used jointly by civilian aircraft, will take another 10 years.

Last week Kyodo News reported that the delegation also met with Pentagon officials, who reportedly expressed frustration with the delay in relocating Futenma.

Tomon said, &#8220;Campbell said that changes would definitely happen in connection to &#8230; closure of Futenma and the Henoko project.&#8221; In a Monday phone interview, Tomon said Patrick Cronin, CSIS vice president, reported that in recent Tokyo talks with Japanese officials, Okinawa was the dominant topic. &#8220;He told us that by August, we will see changes in the circumstances surrounding the air station and Henoko project.&#8221;

Tomon, also a former deputy governor of Okinawa, said she was excited to see Japanese media reports, all citing unnamed Japanese officials, that Futenma would be a major topic at Feb. 19 talks in Washington on realigning U.S. troops in Japan.

Hatsuhisa Takashima, a high-ranking Ministry of Foreign Affairs spokesman, would not confirm the meeting would be Feb. 19. &#8220;We are targeting (a) February and March time frame,&#8221; he said Monday. &#8220;However, the schedule is yet to be set.&#8221; He also denied media reports concerning a Henoko project review.

Earlier this month, a spokesman for Marines on Okinawa said the service welcomes &#8220;the free exchange of opinions about U.S. forces on Okinawa.&#8221; Capt. Joseph Plenzler of the Marines&#8217; Consolidated Public Affairs Office said Marines support relocating Marine air operations to an alternate site away from populated areas.