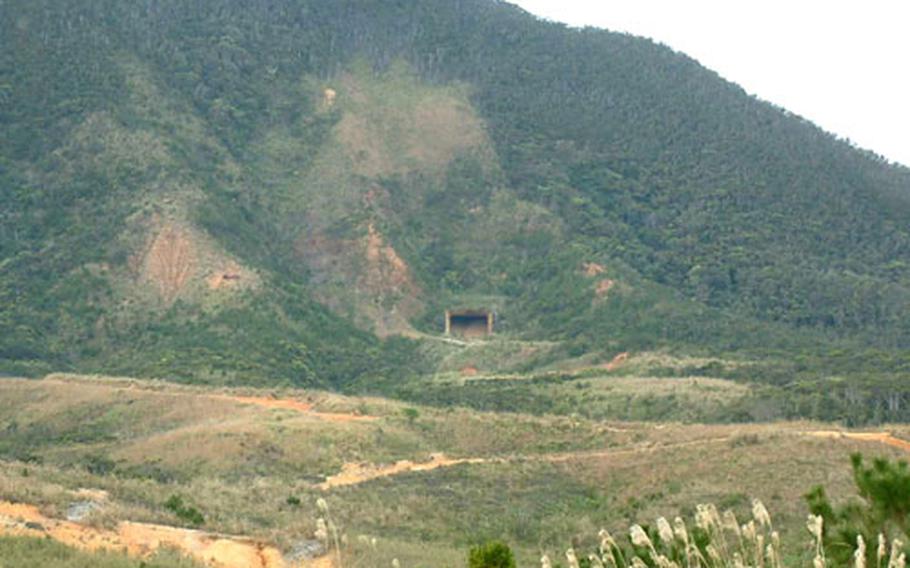 Marines use the concrete bunker in the side of this mountain at Camp Schwab as a target for live-fire training. Okinawa officials want the firing range closed permanently. (David Allen / S&S)

Marines use the concrete bunker in the side of this mountain at Camp Schwab as a target for live-fire training. Okinawa officials want the firing range closed permanently. (David Allen / S&S) 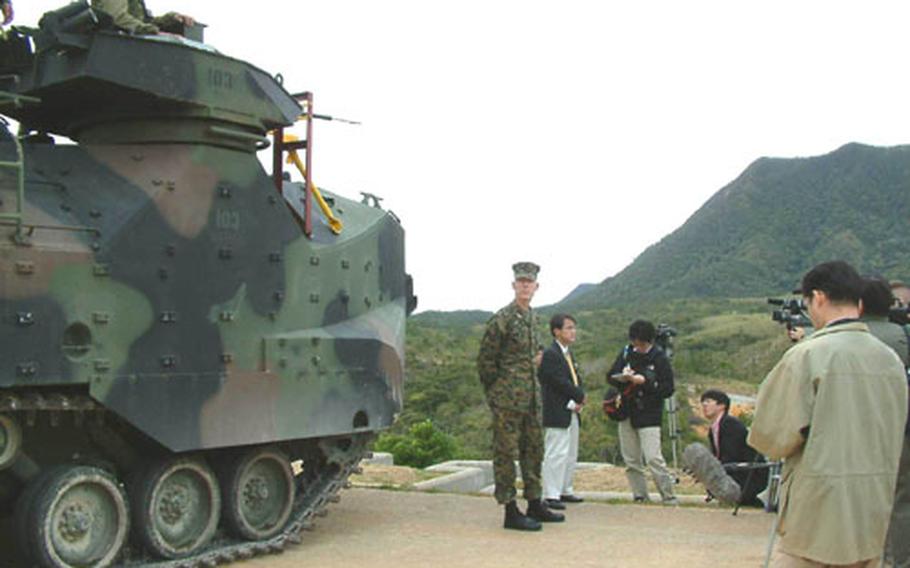 A gaggle of reporters and photographers press in on Marine Col. Ron Yowell during a safety demonstration Feb. 7. A restraint is installed on the amphibious assault vehicle to limit the horizontal and vertical movements of the gun. (David Allen / S&S)

A resolution the Prefectural Assembly passed Feb. 28 was delivered Tuesday to U.S. Forces Japan officials in Tokyo. But Toshinobu Nakazato, an assembly member from Haebaru in southern Okinawa, said USFJ officials rebuffed him when he attempted to arrange a meeting early Monday.

&#8220;I was told they would not accept our visit because we refused to attend a safety demonstration held Feb. 7,&#8221; he said.

The Marine Corps had invited Okinawa officials to a safety demonstration on Range 10 on Camp Schwab to display a device limiting the horizontal and vertical movement of amphibious assault vehicles&#8217; .50-caliber machine guns. The range had been closed since July, when a pineapple farmer claimed a stray bullet narrowly missed him.

Okinawa police have not completed their investigation; no findings have been released concerning how the round was shot over a mountain into a small farming community near Nago.

But Okinawa officials, charging the incident was merely the latest in a string of narrow misses over several decades, are demanding the range be closed permanently.

The resolution the assembly passed last Friday calls for relocating all Marine training &#8220;elsewhere off Okinawa&#8221; and accuses the Marine Corps of failing to &#8220;meet its responsibility to explain the cause of the accident.&#8221;

The Marine Corps never officially has confirmed that a stray round plowed into the farmer&#8217;s pineapple patch. Marine officials never were given the bullet for testing and Okinawa police have been unable to match the projectile with any machine guns Marines use on the range.

The Marine Corps suspended training on the range to address local concerns, and placed metal restraints on gun mounts.

Okinawa officials said they were uninterested in additional safety features because they want the range closed. In any case, the firing range is inadequate for Marine training, they have insisted.

The resolution states, &#8220;It is well understood that the facility can not provide a suitable environment. Yet no suitable explanation has been given to the people of Okinawa for the continued use of the facility.&#8221;

The GAO report stated, &#8220;The ranges throughout the island have fixed firing points that do not allow tactical firing.

&#8220;As a result, Marines can fire in only one direction as opposed to firing in any direction, which would be the most likely situation in combat.&#8221;

The Marine Corps contends the range is the only place on Okinawa to practice firing live rounds from machine guns mounted on amphibious assault vehicles.

Nakazato said he pointedly asked why the delegation at first was rebuffed Tuesday.

&#8220;We were told that our declining to attend the safety demonstration made USFJ officials wonder if we were concerned about safety of local residents,&#8221; he said.

A USFJ official contacted Tuesday would not comment on Nakazato&#8217;s contention.

&#8220;USFJ will receive the Okinawa Prefectural Assembly and their protest concerning resumption of live firing on Range 10,&#8221; read a statement released prior to the meeting. &#8220;While we appreciate their concerns, US forces must continue to train and prepare to meet obligations under the US-Japan Mutual Security Treaty. Safety measures demonstrated on Range 10 on Feb. 7 will allow us to do this in a safe manner.&#8221;

Nakazato said the delegation met USFJ officials for about 30 minutes. &#8220;Afterwards, we realized once again that there is a wide perception gap between the military and us,&#8221; he said.

&#8220;Our stance is that the training at the facility should be discontinued. Even if the military tells us that they adopted a new safety device, we cannot take everything on faith.&#8221;