Okinawa youth show off their spirit at cheerleading exchange Cheerleaders from Kadena Youth Sports and Japanese girls from outside Kadena Air Base join together for first-of-its&#39; kind cheerleading exchange during a football game Saturday on base. (Mark Oliva / S&S)

Cheerleaders from Kadena Youth Sports and Japanese girls from outside Kadena Air Base join together for first-of-its&#39; kind cheerleading exchange during a football game Saturday on base. (Mark Oliva / S&S) 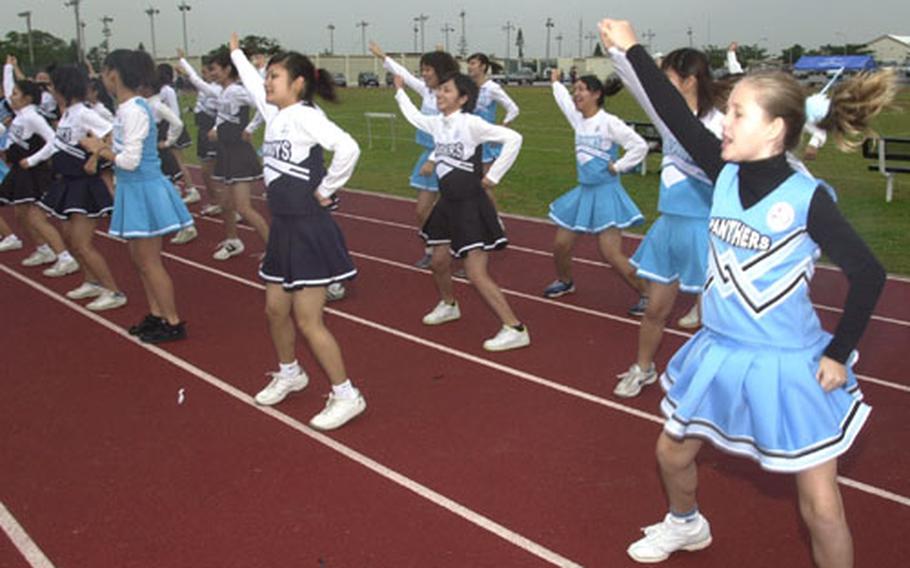 Japanese cheerleaders got their first chance to cheer and first-ever glimpse of American football at a game Saturday at Kadena Air Base. (Mark Oliva / S&S)

KADENA AIR BASE, Okinawa &#8212; Cheerleaders for youth sports here are giving Japanese girls something to shout about.

&#8220;This was the first time historically they&#8217;ve even taken part in cheerleading and seen American football,&#8221; said Lisa Faust, a volunteer coordinator for the Panther cheerleaders. &#8220;They had a ton of questions about how the game was played.&#8221;

Girls from the two squads started working together three weeks before the weekend game, to learn the basics, Faust said. Cheerleaders from Kadena High School and the youth team worked on chants and pompom routines, eventually escalating to stunts.

The U.S. hosts traveled to Okinawa City to train their Japanese counterparts. They worked through language barriers, Faust said, that unexpectedly were not a stumbling block.

Two Kadena High School cheerleaders, Allison Blodgett and Julie McAlexander, volunteered to coach the Japanese team. It was a daunting task they both took on without a second thought.

&#8220;I helped out because I thought the Japanese girls should have a chance to cheer,&#8221; said Allison, a 16-year-old junior. &#8220;We had the translators, but mostly communicated with hand movements. They were pretty good. They wanted to learn and picked it up pretty quickly.&#8221;

The cheers the Kadena High cheerleaders passed on were basic ones. The dance routines were a little more complex &#8212; but that didn&#8217;t slow the Japanese girls.

Kadena&#8217;s Youth sports donated uniforms for the Japanese girls to wear. At the game, both squads performed together, creating human pyramids and chanting cheers in English.

The venture was a first for the Japanese girls, but it might not be the last. Hanashiro said Okinawa City constantly strives to get Japanese and U.S. cultures to mix, and if this year&#8217;s clinics were an indicator, cheerleading might return.