A blackened tree stump marks the spot where Okinawa International University’s administration building stood when it was struck by a Marine helicopter Aug. 13, 2004. No one was injured seriously in the accident, but the building was razed. (David Allen / S&S)

A blackened tree stump marks the spot where Okinawa International University’s administration building stood when it was struck by a Marine helicopter Aug. 13, 2004. No one was injured seriously in the accident, but the building was razed. (David Allen / S&S) 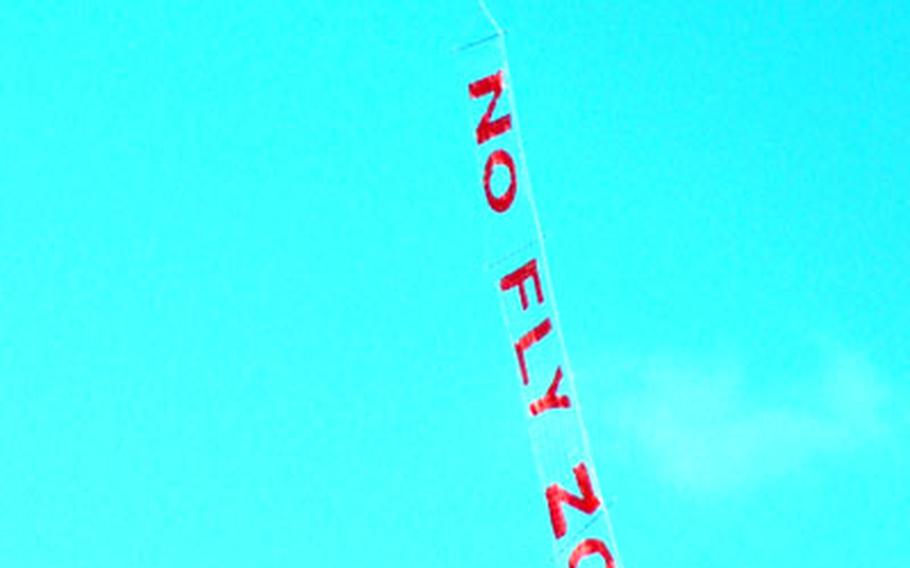 A helium-filled balloon went up over the school last week to mark the one-year anniversary of the helicopter crash. (David Allen / S&S)

Its lone broken branch points up, as if to target the space where a CH-53D Sea Stallion helicopter fell from the sky last year and burst into flame.

The Marine helicopter spun out of control Aug. 13, 2004, and crashed on the campus, adjacent to Marine Corps Air Station Futenma&#8217;s southern fence line.

The accident&#8217;s cause was attributed to a failure to install a cotter pin during routine maintenance of the helicopter.

The school decided to raze the building and build a larger one at a cost of $5 million to $7 million, said Kentaro Oshiro, the university&#8217;s chief public relations officer.

&#8220;Negotiations on the amount of compensation we should receive for the damaged building is still under way with the Defense Facilities Administration Agency,&#8221; Oshiro said.

Near the broken stump, the school has preserved sections of the crash damaged-wall. Blackened by the smoke and flames and notched by the helicopter blades, it will be restored as a monument elsewhere on the campus, Oshiro said.

Oshiro said the wall is to remind people of the danger posed by the nearby air station.

In 1996 the U.S. and Japan agreed that MCAS Futenma should be closed and moved elsewhere and a site in the waters off rural northeast Okinawa at Henoko was later chosen for a new base. But opposition to the plan, including a 16-month sit-in at the village&#8217;s port, has delayed the start of construction.

To mark the one-year anniversary of the crash, the school also recently lofted a helium balloon over the campus&#8217;s main building. It flies about 165 feet over the roof of the building.

&#8220;It is to commemorate the anniversary of the helicopter crash and to protest the continued flying of military aircraft over our community,&#8221; Oshiro said.

The school rejected a request by the Naha Bureau of the Defense Facilities Administration to not fly the balloon. The bureau said the balloon could pose a danger to flights from MCAS Futenma.

However, a DFAB Naha spokesman said the school was not in violation of any Japanese laws.