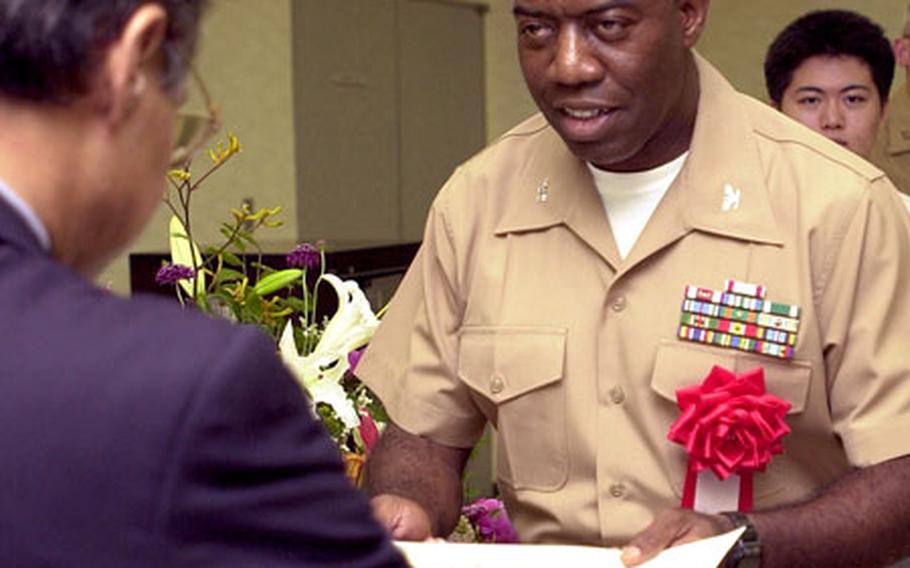 &#8220;On behalf of the Marines and sailors on Okinawa, I&#8217;m humbled to receive this special award,&#8221; he said. &#8220;We are honored to serve the people of Okinawa. The good works done by the Marines and sailors are a token of our appreciation for our host country&#8217;s generosity, and also shows our desire to contribute to the communities where we live and work.&#8221;

Fleming said more than 200 troops in the unit have volunteered their time.

The unit&#8217;s commanding officer, Col. Doarin Lewis, said the community service &#8220;gives them an appreciation of the larger world we live in. We teach them to be selfless rather than selfish.&#8221;

Navy Lt. David You, battalion surgeon from the Medical Section, said the unit received the award because of its &#8220;group effort.&#8221; He said one of the most important things the unit can do is &#8220;serve those around us.&#8221;

You said the unit has taught English to both children and adults in Henoko and Nago.

One of the unit&#8217;s volunteers, Seaman Stephan Reeves, said he has been volunteering for about seven months.

Seishin Oyama, chairman of the association&#8217;s Okinawa chapter, said he was very pleased to see Americans who live on Okinawa recognized.

&#8220;There are so many Americans on Okinawa and I knew that there were so many people who have been greatly contributing to the local communities,&#8221; he said. &#8220;I hear lots of such stories but no local media reports them.&#8221;

Oyama said he felt it was his duty to shed light on the servicemembers&#8217; contributions.

&#8220;I know how hard it is to contribute to communities with a different culture and language,&#8221; he said. &#8220;Nevertheless, these people go out and offer their hands to local communities and less fortunate people.&#8221;