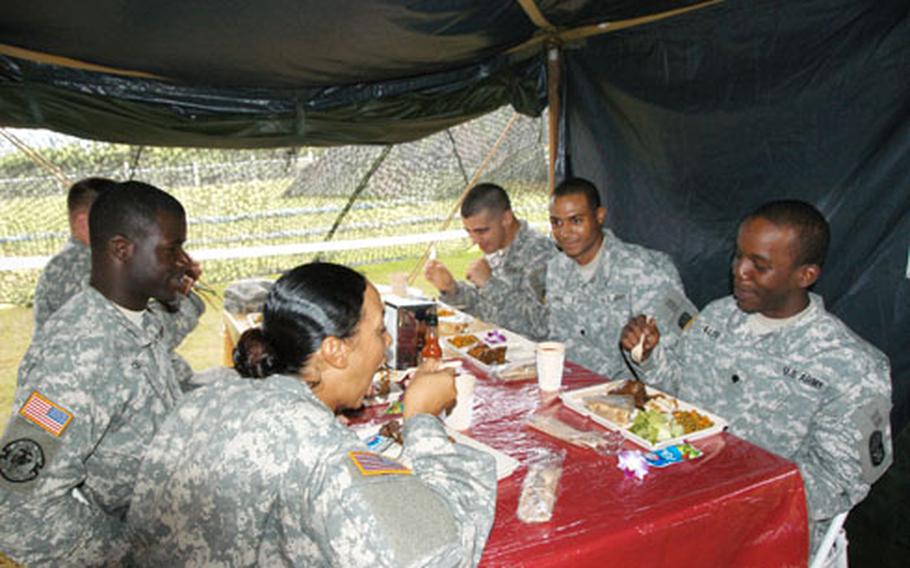 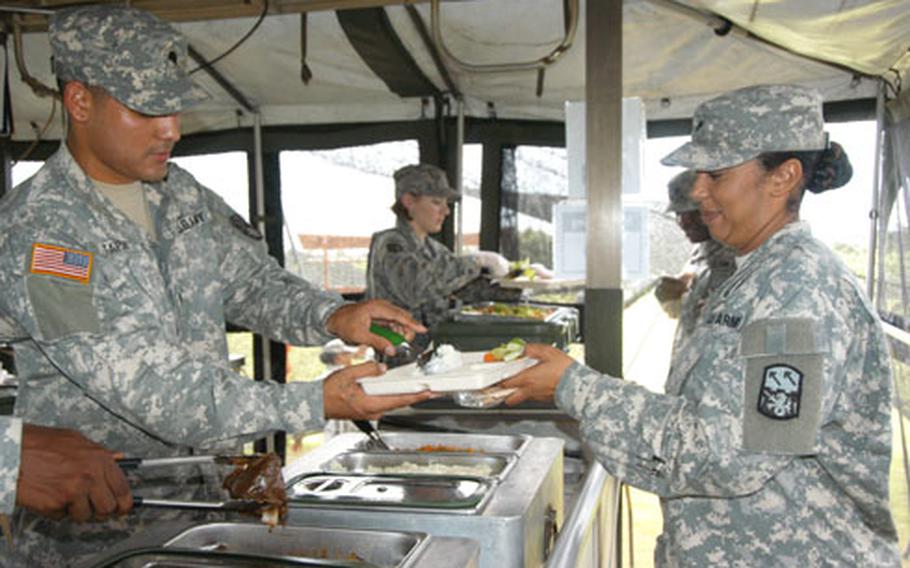 Reid and 31 of his fellow soldiers from the 1-1 Air Defense Artillery Battalion were enduring an evaluation for the Army&#8217;s esteemed Philip A. Connelly food services competition.

"I put a little more love into it than usual," said Reid, as he stirred a simmering pot of the stew. "We love the soldiers."

The battalion&#8217;s food service unit was recognized in July as the best in the U.S. Army Pacific, and is now seeking the title of top Army field kitchen worldwide.

The winner will be announced between mid-December and late January.

Members had been practicing for Tuesday&#8217;s evaluation for the past three weeks, he said.

Safety, sanitation, preparation, execution of meals, and service are key, said Chief Warrant Officer Verona Williams, a technical adviser from the U.S. Department of the Army and a judge in the competition.

The winning unit of this field competition will receive a trophy, and two members will be chosen to attend a two-week training course at a culinary institute in the States.

"We&#8217;re looking at how well they prepare the quality of food that is going on the plates of those soldiers," Williams said.

In makeshift tents near Torii Station&#8217;s baseball fields, food specialists tidied serving stations and cooks minded the temperatures on the meat and vegetables as they awaited the arrival of the lunch crowd.

Also on the menu: a carrots and peas medley, garlic mashed potatoes with gravy, salad and pineapple upside-down cake.

About 100 soldiers from the battalion later enjoyed the chow.

The food service unit also was judged on a breakfast menu served that morning.

Spc. Jesse May of the 1-1 ADA Battalion said he was disappointed he missed breakfast.

"If it was anything like lunch, it was pretty dang good," said May, who was sold on the mashed potatoes.

Field operations can be tricky since the kitchen is mobile, and cooks must learn to juggle outdoor conditions with limited resources, said Assistant Food Operations Sgt. 1st Class Christopher Jamison.

But more importantly, it&#8217;s about providing a nutritious meal in a hospitable environment &#8212; which Jamison said his team does well.

"I think it&#8217;s their attitude. If you look around you don&#8217;t see grumpy soldiers," Jamison said. "Motivation brings inspiration."

Sgt. Delicia Pitts of the 1-1 ADA Battalion said she hopes her fellow soldiers snag the award.