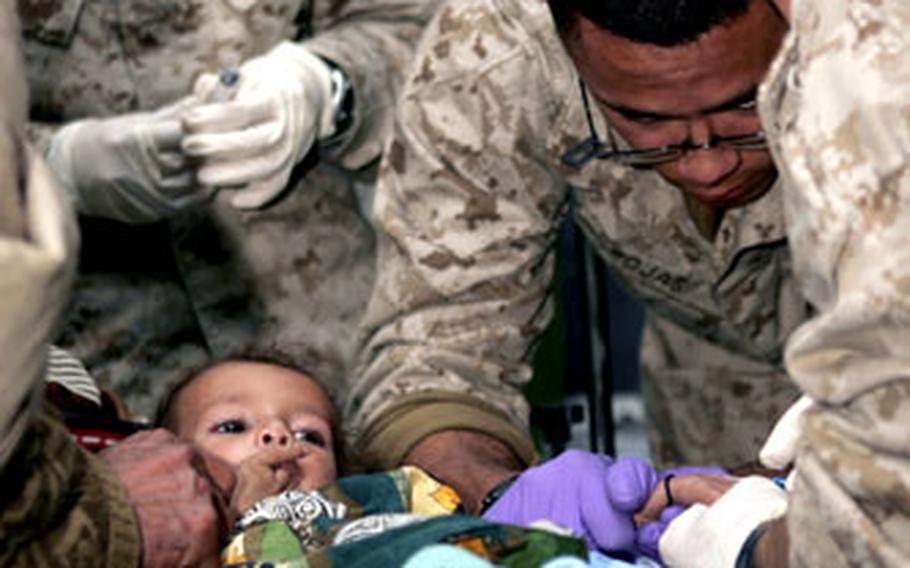 Troops from Okinawa sent to northern Pakistan in mid-November continue to see a steady flow of patients at the field hospital they set up to aid victims of the region&#8217;s catastrophic Oct. 8 earthquake.

More than 200 Marines and sailors from III Marine Expeditionary Force, now called Combined Medical Relief Team 3, have been operating out of what is now named Camp Wahlen in Shinkiari, Pakistan.

More than 10,000 patients have been seen at their facility &#8212; an average of about 175 people per day. The most common ailments are pneumonia, upper respiratory illnesses, scabies and musculoskeletal pain, according to medical officials deployed there.

Only a handful of patients seen were injured by the earthquake itself; most are suffering from injuries and ailments resulting from living conditions in the aftermath.

&#8220;For example,&#8221; said Team 3 spokesman Marine Capt. Danny Chung in an e-mail response to query, &#8220;burn patients were treated as a result of displaced Pakistanis living in tents which catch fire. Though not a direct result of the earthquake, it is related.&#8221;

Chung added that while many patients have been seen for &#8220;routine&#8221; medical care, the team also has performed many lifesaving procedures.

One of the recent serious cases was that of an 11-month-old girl suffering from pediatric sepsis (a form of infection), high fever, diarrhea and severe loss of appetite. Relief team members reduced the girl&#8217;s fever and gave her intravenous fluids and antibiotics before she was taken to a local district hospital for further treatment, Chung said.

&#8220;The number of illnesses (in U.S. troops) are few and far between,&#8221; Chung said, adding that the snowline in the mountainous area continues to creep lower toward their camp but they don&#8217;t expect any snowfall while there.

Chung said life has gotten a little more comfortable since camp was set up in mid-November. The Marines and sailors now have shower and bathroom trailers as well as a mess-hall trailer and a local vendor &#8220;exchange.&#8221;

In addition to seeing patients, the group is working closely with various nongovernmental agencies, Chung said, such as Mercy Corps, Save the Children and USAID.

He said Team 3 representatives attend weekly nongovernmental organization cluster meetings so they can pool resources to help as many Pakistanis as they can.

&#8220;As time progresses, the NGOs will begin to take a larger and long-term role in this humanitarian effort,&#8221; he said.

Chung said the group is uncertain how long it will be needed there.