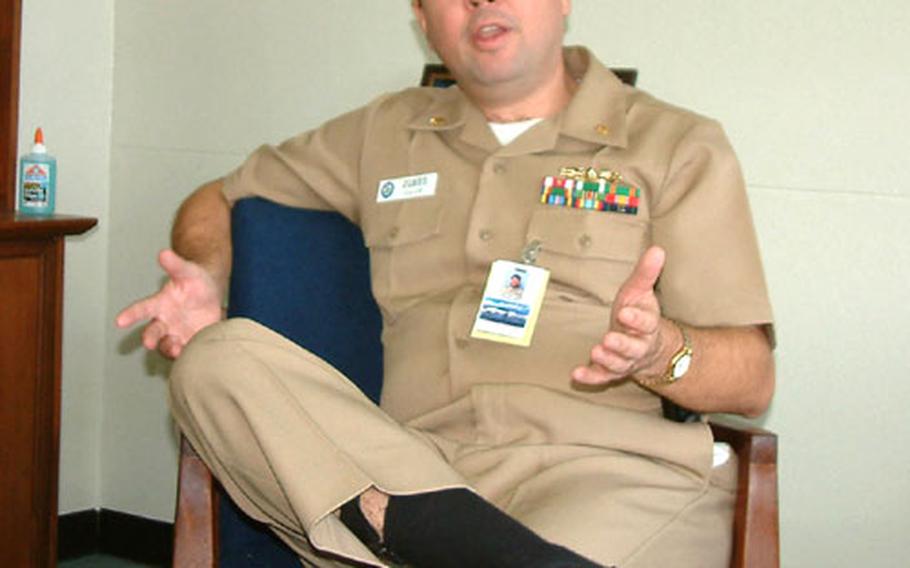 Not to worry: The U.S. Naval Hospital on Okinawa has a new program designed to help active-duty servicemembers develop coping skills that will help keep their emotions in check and change self-defeating behavior patterns.

Jones said the new program&#8217;s purpose is to provide &#8220;short-term outpatient intervention for active-duty members with occupational and interpersonal problems.&#8221;

The first group of 10 patients went through the five-day course Feb. 10 &#8212; Feb. 14. Jones plans to run patients through it every other week.

The program now is restricted to active-duty members but he hopes to have the staff eventually to allow offering it to family members and civilians. Currently, just Jones and Petty Officer 1st Class Ken Perkins staff the program.

&#8220;We&#8217;ve been planning this for some time now. We were just waiting for space in the hospital to open up,&#8221; said Jones, who arrived two months ago from the USS Enterprise. &#8220;During the last several years, the major naval hospitals in Portsmouth and San Diego had something like this. We will be the program for the Western Pacific.&#8221;

Lt. Cmdr. Juan Carlos Arguello, assistant department head for Mental Health, was involved with a similar program at Naval Medical Center Portsmouth, N.H., and was instrumental in securing the resources for the Okinawa program, Jones said.

Arguello said he was involved with the Okinawa since its inception.

&#8220;With all the planning involved, it took us 2&#189; years to start it here,&#8221; he said. &#8220;As time goes on, I think the commands will see a great difference in how their people are dealing with the incredible stress brought on by being in the military and dealing with the additional responsibilities that entails.&#8221;

The program is designed for people overwhelmed by pressures of the everyday military work environment, Arguello said. &#8220;They are dealing with difficult situations at work and at home and are presented to us in crisis, some of them even having vague suicidal thoughts. This program helps them improve their coping skills so they can tolerate the stress they encounter and respond to it in a positive manner.&#8221;

&#8220;We had people new to the island and having trouble adjusting to Marine Corps and Navy life and being separated from their girlfriend or spouse for long periods of time,&#8221; he said. &#8220;One person had intense bereavement issues after the loss of his wife in a car accident back in the States; another was facing some serious legal difficulties and others were dealing with occupational stress caused by their bosses or co-workers.&#8221;

&#8220;Sometimes, the workplace is too salty for some people,&#8221; Perkins said. &#8220;The workload is heavy and supervisors are overbearing.

&#8220;One important thing we do is not to talk down to our patients,&#8221; he said. &#8220;Some members of our first class complained that their biggest problem was being in an environment where they were constantly belittled and talked down to by their supervisors.&#8221;

For now, the program is limited to active-duty servicemembers who must get orders from their command allowing them to take a week off from their usual duties. The first patients to attend were selected through referrals from mental health providers. Future participants will be screened first by their primary caregivers, Jones said.

Servicemembers stationed on Okinawa will travel to the hospital from their homes or barracks for the daily classes. Personnel from off-island will be assigned quarters at the hospital&#8217;s medical hold barracks.

&#8220;We&#8217;re not promising people they&#8217;re going to walk out of here happy and enjoying all aspects of being in the military,&#8221; Jones said. &#8220;We have some people who have some pretty heavy emotional issues. But, although we can&#8217;t change some of those big things, we can modify some internal responses to control stress.

&#8220;We try to mix it up,&#8221; he said. &#8220;We show them different relaxation techniques, even watch some film clips. We showed our first group some scenes from the movie &#8216;The Legend of Bagger Vance,&#8217; where Bagger teaches the golfer how to focus, how to concentrate and perceive things differently.&#8221;

He takes a multidisciplinary approach. Besides providing patients with reading material, workbooks and videotapes, he also brought in guest speakers. A chaplain talked about spirituality, an exercise expert gave tips on working out to get rid of stress, a clinical nutritionist discussed eating a balanced diet, an alcohol counselor spoke about alternatives to hitting the bottle.

&#8220;This is not just for anybody,&#8221; he cautioned. &#8220;We have to screen the people being considered for the intensive program. Can that person be better served by other resources &#8212; perhaps depression or anxiety group therapy? Or, perhaps, counseling by a chaplain? We&#8217;re looking at people who would benefit from this intense level.

&#8220;An important factor to consider is whether if some intervention does not occur, it could be a loss to the command,&#8221; he said. &#8220;The big picture is to keep people at their jobs, making them resilient and ready to do their duty.&#8221;

&#8220;We&#8217;re pretty enthusiastic about it so far,&#8221; Arguello said. &#8220;Ten years or so ago we would have lost some of these people to alcohol or drug abuse or other patterns of misconduct. Now we can provide them with the tools they need to avoid those behaviors and return to full duty.&#8221;