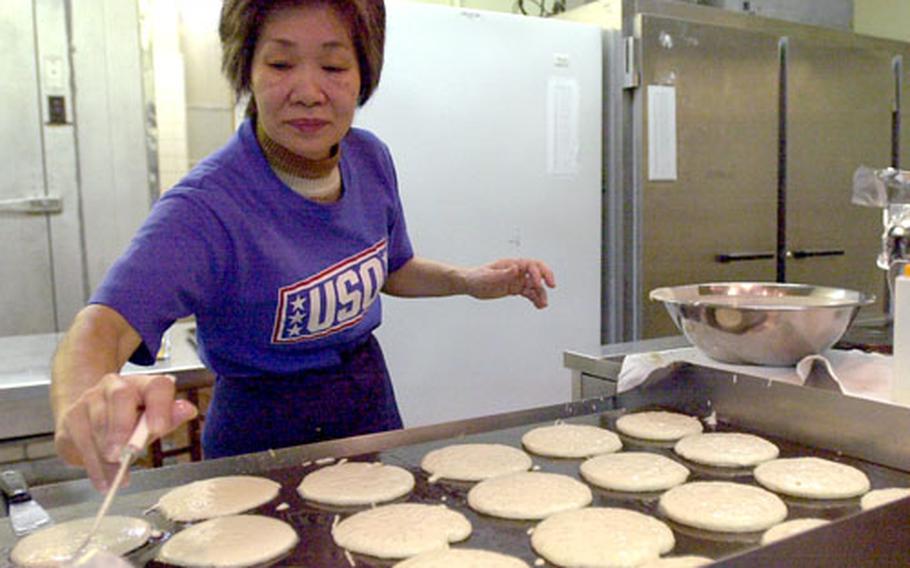 Airoko Tokashi neatly lines up pancakes to cook at the Marine Corps Air Station Futenma USO, which holds “Flapjack Friday” every week. From 6 a.m. to 9 a.m. Fridays, free pancakes, sausages and juice are served up. The center goes through almost 900 pancakes and 20 pounds of sausage every week. (Fred Zimmerman / S&S)

It&#8217;s understandable. Few things can compare to a free hot pancake breakfast for hungry Marines where even second helpings are encouraged.

Every Friday morning the USO here and on Camp Schwab host &#8220;Flapjack Friday&#8221; &#8212; free pancakes, sausages and juice for all. The Camp Hansen USO will kick off its daily free breakfast sometime in April, according to MCAS Futenma USO center manager Gardner Williams.

The first week the meal was held, Williams said they served just over 70 customers. That number more than doubled after word got out and they served 160 the next Friday. The third Friday, March 17, Williams said deployments dipped the number into the 90s, but last Friday the USO team had filled more than 70 stomachs in the first 90 minutes.

Williams said word has gotten out about the free breakfast. On March 17, Marines took The Green Line bus to Futenma from Hansen to fill up, he said. And for the last two weeks, Marines from Futenma&#8217;s chow hall ate breakfast and held their morning meeting there after serving up their own breakfast.

For Master Sgt. James Chino, the Nuclear, Biological and Chemical chief for the 1st Marine Aircraft Wing, the USO breakfast is a good way to start the day.

Cotton said the free breakfast will &#8220;continue running as long as the troops want it.&#8221;

For more information or to order a stack of flapjacks to go, call the USO at DSN 636-2113.