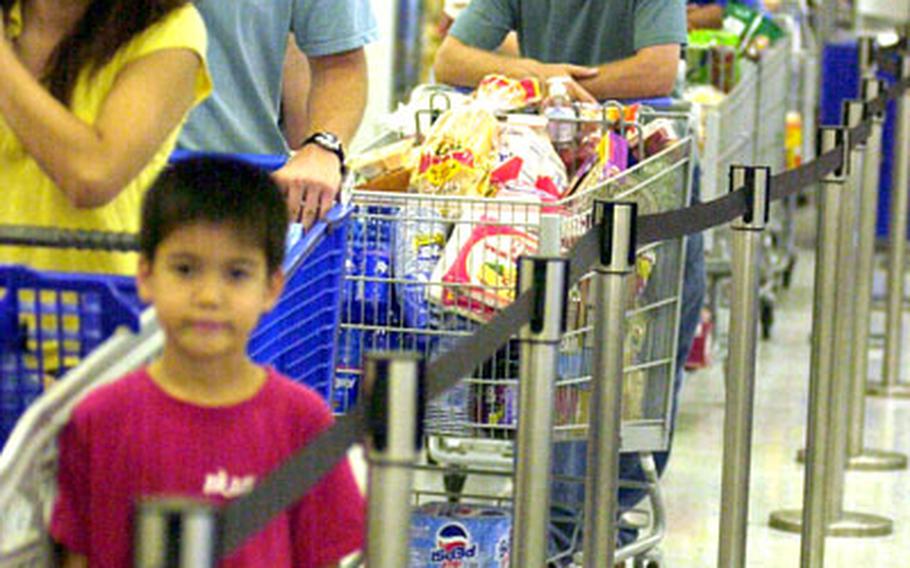 Shoppers wait in line to check out of the Kadena commissary on Friday in advance of the approach of Super-typhoon Nabi. The powerful storm is expected to slam into the northern part of Okinawa late Monday, packing winds of 161 mph and gusts up to 196. (Dave Ornauer / S&S)

KADENA AIR BASE, Okinawa &#8212; Base residents from Camp Kinser to Camp Hansen flocked to commissaries to stock up on essentials and began securing yard items Friday as Nabi strengthened into a super typhoon and continued making a beeline toward a midday Monday arrival.

Equivalent to a Category 5 hurricane, Nabi has the potential to turn into a dangerous projectile &#8220;anything that one person could pick up and move,&#8221; Wilson said.

Weather and base officials stressed that all personnel should remain inside at the storm&#8217;s height, whether living on base or off. &#8220;I would plan to stay indoors for a good 36 to 48 hours,&#8221; Wilson said.

In advance of the storm, commissaries at Kadena and nearby Camp Foster swelled with shoppers, some of whom stood in check-out lines for more than an hour. Their carts bulged with bottled water, milk and bread, which were being purchased faster than shelves could be restocked.

Kadena commissary administrator Doug Cook said he expected his store to do $380,000 in business over Thursday and Friday, when normally it takes in $200,000 over two days. His 70-person staff spent much of Friday trying to restock shelves.

Residents were advised to finish general home cleanup and have all loose items locked down by noon Saturday, an hour after the island was expected to upgrade to TCCOR 2.

What might change, he said, is the storm&#8217;s precise closest point of approach. Nabi&#8217;s forecast track varied northward by 15 miles from Thursday to Friday. Upper- atmosphere steering wind flow might push the storm further south, which could bring 127 mph winds to Kadena. If it stays on its current track, it would hit the northern end of the island with winds between 98-109 mph.