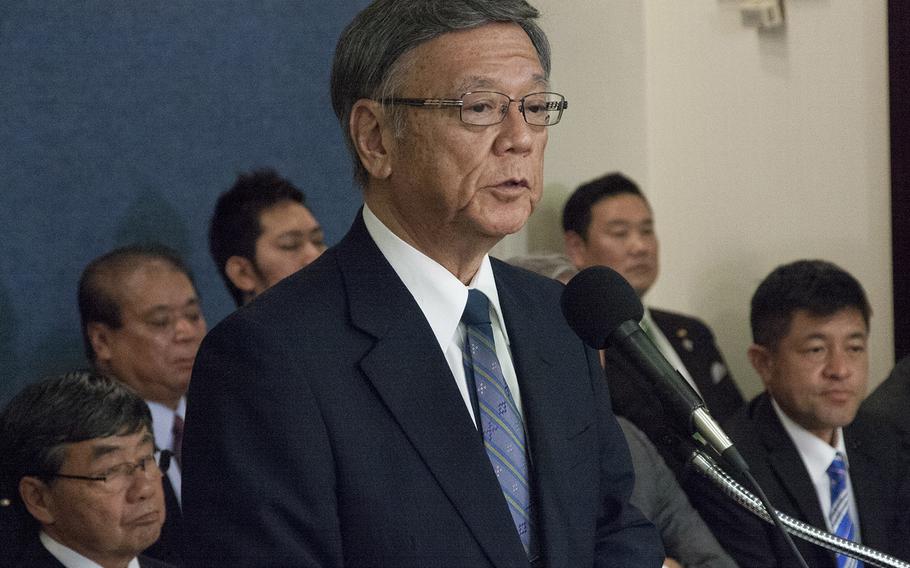 CAMP FOSTER, Okinawa — A special election to choose a replacement for anti-U.S. base Gov. Takeshi Onaga has been set for Sept. 30.

Onaga, 67, died suddenly of pancreatic cancer on the evening of Aug. 8, less than two hours after officials said he would be stepping down temporarily over health concerns.

His two vice governors — Kiichiroh Jahana and Moritake Tominaga — announced they would share the post until a new leader is chosen. Jahana served as acting governor until Aug. 12, when Tominaga took over. It is unclear if Tominaga will remain interim governor until the election.

“On September 13th, all the candidates will be officially announced,” said Maiko Shigehisa of the Okinawa Election Commission.

The Okinawa Times reported Tuesday that Tokyo may postpone landfill work for a runway into Oura Bay at Henoko until after the election due to a period of mourning for Onaga that’s expected to last 49 days. The runway will facilitate the closure and relocation of Marine Corps Air Station Futenma from urban Okinawa to the remote coastal base of Camp Schwab.

“The central government is concerned that the landfill work may affect the election’s outcome,” the newspaper reported.

The landfill work was set to begin Friday. Onaga had threatened to revoke permits for it over environmental concerns, but he died before he could follow through.

A day after Onaga’s death, prefectural officials held a meeting with the Okinawa Defense Bureau that was seen as a precursor to revoking the permits.

Officials from Japan’s Ministry of Defense would neither confirm nor deny any delays for the landfill.

“It all depends on the weather, and at this moment a solid date has not been decided yet,” an unnamed spokesman said.

About 70,000 protesters rallied Saturday at a Naha park to mourn Onaga and to stand in opposition to the Futenma relocation.

In the days after the governor’s death, Japanese officials vowed to push forward with the plan to relocate Marine Corps air operations within the prefecture.

“Henoko is the one and only answer to resolve this whole issue and it will not be changed,” Defense Minister Itsunori Onodera told reporters Wednesday. “The central government’s decision will not change.”