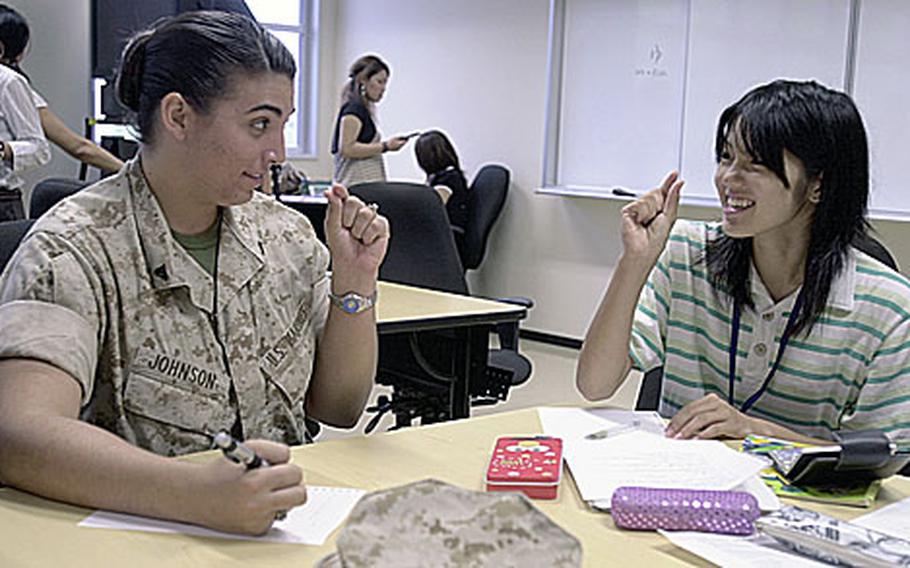 Mariko Makishi, 16, a student from Uruma City, attempts to translate Japanese into English at the camp. (Cindy Fisher / S&S) 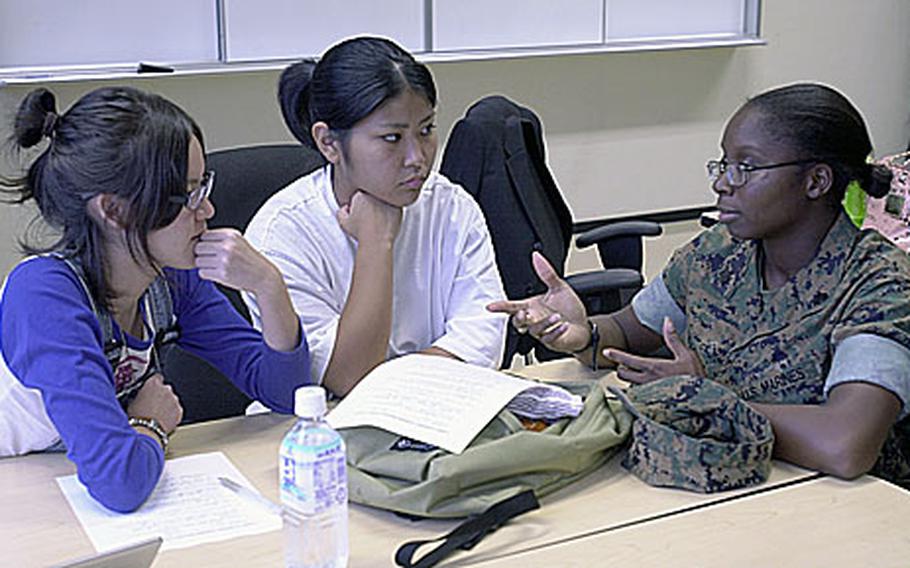 Sgt. Lakeyma Wagers, 24, from Long Island, N.Y., works with Chisato Fujita, center, and Yumi Tokuyama, both 17-year-old students from Uruma City, during the camp. The three were trying to communicate the meanings of some common English e-mail abbreviations such as LoL, which Wagers said means "laugh out loud." (Cindy Fisher / S&S) About 10 members of 3rd Marine Division and 50 students from five high schools in Uruma city worked together to build English skills and share cultures during a weeklong class that concluded Saturday with a movie at Marine Corps Air Station Futenma.

Volunteering for the class has been fun, said Lance Cpl. Lawrence Jackson, 22, from Holyoke, Mass. &#8220;It teaches them English, and at the same time, it teaches you Japanese,&#8221; he said.

Sgt. Gabriel Nunez, 23, from Jersey City, N.J., was already fairly fluent in Japanese, having taught himself the language partly by reading Japanese comic books. But teaching has solidified his understanding of the language, he said.

Likewise, engaging in conversation with the Marines helps Uruma students learn more English than they could from their textbooks, said Uejo Harumi, with the Uruma City Office.

Lance Cpl. Justin Thompson, 19, from Cincinnati, and several others also volunteer as English instructors at a weekly Monday evening class for all ages at the Courtney Education Center.

The classes evolved from requests Courtney community relations specialist Ichiro Umehara received from Japanese parents about seven years ago, Umehara said. The parents couldn&#8217;t afford to send their children to the United States but wanted them to experience American culture, Umehara said.

It also benefits the young Marine volunteers, many of whom don&#8217;t have cars, by giving them a chance to meet locals and experience the Japanese culture, he said.

Even better, it counters the stereotype that some locals have of Marines as scary troublemakers, he said.