Okinawa teacher lucky to be alive after birthday bike collision 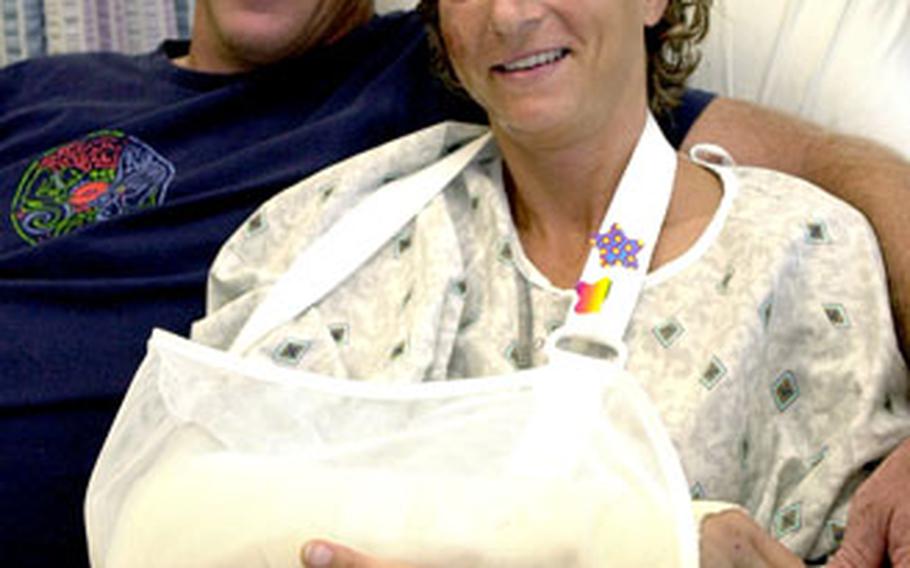 Jill Kleinheinz, a special education teacher with DODDS on Okinawa, sits with husband Bern Burkhalter in her hospital room at U.S. Naval Hospital Okinawa Friday afternoon. Kleinheinz collided with a car while riding her bike on her 40th birthday on Oct. 4. (Fred Zimmerman / S&S)

CAMP FOSTER, Okinawa &#8212; Jill Kleinheinz thought she&#8217;d mapped out the perfect plan for her 40th birthday on Oct. 4: A pre-dawn bike ride from her home just outside Camp Foster&#8217;s Gate 5 to the Bolo Point cliffs. There, she would watch the sunrise then go to work at Bob Hope Primary School on Kadena Air Base, where she teaches special education.

She never made it to school.

At 5:30 a.m., as Kleinheinz rode at an estimated 19 mph down a paved road through a sugar cane field in Yomitan, her bicycle collided with a car driven by Gentoku Shimoji, 80, of Naha, the Okinawa Prefectural Police said.

She said the car veered into her lane far enough that she struck the passenger side near the front tire. She said she flew over the vehicle, landing in a ditch.

In about five minutes, someone did: Kubasaki High School teacher Tom McKinney. Kleinheinz flagged him down, told him what had happened, asked for his cell phone to call for help &#8212; and told him to find the driver.

McKinney found Shimoji, parked with a flat tire on his car near a golf course, Kleinheinz said. He told the elderly man he&#8217;d hit someone. Shimoji returned to the scene via taxi, the police report stated.

The 80-year-old said he&#8217;d veered into the other lane when roadside bushes blocked his view, the police report stated. He didn&#8217;t see Kleinheinz or realize his car had collided with her bicycle, but did feel a jolt. Shimoji stopped his car and looked around but proceeded to the golf course after failing to see anyone, the report stated.

Kleinheinz credits her helmet with saving her life. She said she was surprised the driver couldn&#8217;t see her because she was wearing a reflective vest and had a headlight on her bike.

The police report listed Kleinheinz&#8217;s only injury as a broken leg. But doctors found more severe injuries: three cracked bones in her face, a right forearm broken in four places, a fractured pelvis and a large laceration on her right thigh. Her right ankle also needed four stitches.

Local police continue to investigate and have yet to determine if Shimoji will be charged.

Kleinheinz said she doesn&#8217;t want charges filed; she truly believes it was just an accident.