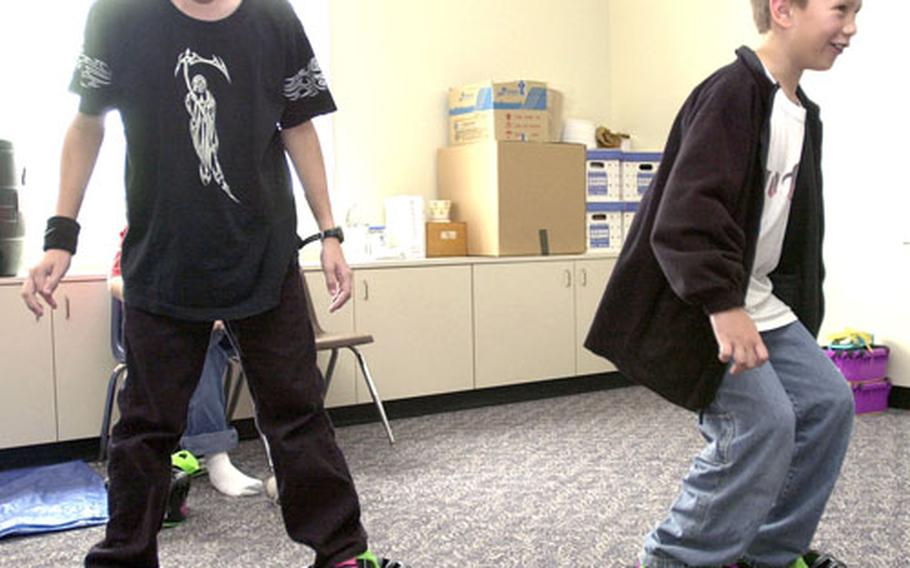 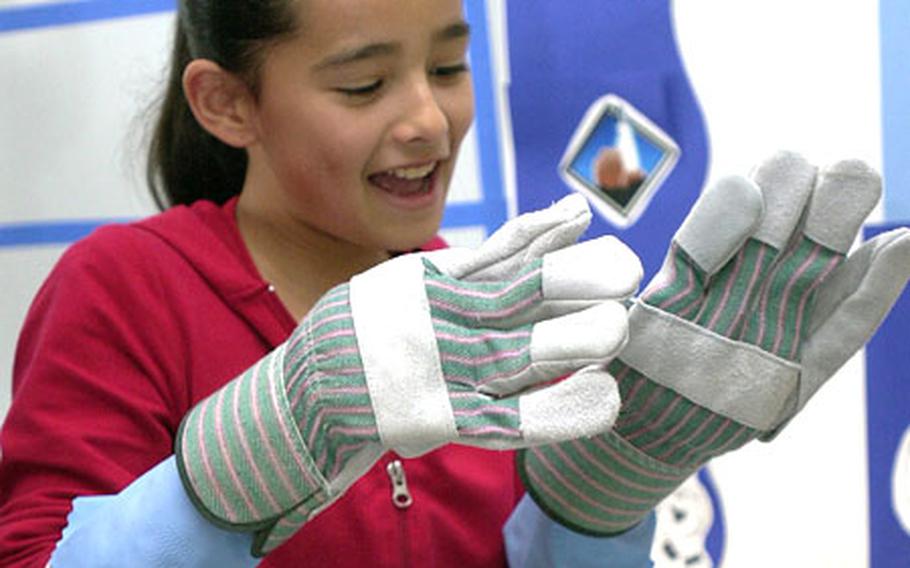 Bechtel Elementary School sixth-grader Jennifer Black is all smiles after she successfully screws a nut onto a bolt after several tries while wearing numerous pairs of gloves, to simulate the restricted movements of wearing a space suit. (Fred Zimmerman / S&S) 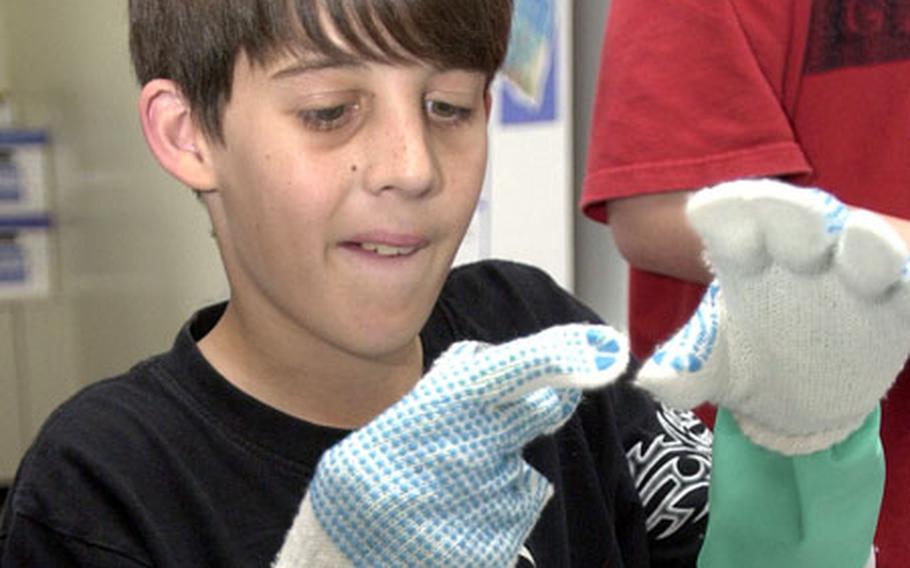 Josh Noby attempts to screw a nut onto a bolt while wearing gloves. (Fred Zimmerman / S&S)

CAMP McTUREOUS, Okinawa &#8212; Students at Bechtel Elementary School here left Earth this week and explored outer space as they walked on the moon, got up close to constellations and learned about gravity &#8212; and all without ever leaving their school grounds.

The school launched &#8220;Space Week&#8221; on Monday. Classes could rotate through space-themed rooms to complete projects and learn about the last frontier, according to Tiffiney Weddle, the school&#8217;s gifted-education teacher who headed the program. Weddle and her &#8220;Space Cadets&#8221; &#8212; other teachers who helped plan the week &#8212; organized it so teachers, kindergarten through sixth grade, could choose which events they wanted their students to experience.

Areas offered were Star Lab, a portable planetarium in which students learned about constellations; Astro Lab, where students had to perform astronaut tasks; Space Quest, a computer lab at which students explored space through Web sites; Space Jeopardy, a space-themed version of the game show; Flight Lab, where students completed two space-related science projects; and a guest speaker who talked about satellites. Later in the week, a simulation software program was offered to teachers that let students explore space.

This is the second time the school has held the weeklong activities.

&#8220;We want to give the kids as much background on the components of space as we can,&#8221; Weddle said. &#8220;We want them to understand things other than the solar system, like how astronauts work in space and how gravity works.&#8221;

One of the more popular rooms was the Astro Lab. There, students had to perform astronaut tasks such as picking up small objects (K&#8217;NEX toys) with a hand-held gripper while wearing five layers of clothes to simulate the restrictions of a space suit. They also drank water upside down, assembled nuts and bolts while wearing four pairs of gloves and laced on &#8220;moon shoes&#8221; &#8212; platform plastic soles with bungee cords that suspended their feet to give a zero gravity feel.

Sixth-grader Jennifer Black, 12, said she enjoyed the Astro Lab the most because the &#8220;moon shoes were so much fun.&#8221; She admitted assembling the nuts and bolts was tough.

The Star Lab was the favorite of fifth-grader Brodie Collins, 10. He said it taught him a lot about constellations and he was surprised to learn there was one named &#8220;Big Dog.&#8221; Collins said he also enjoyed learning about gravity and the experiments in the Flight Lab. The hands-on learning, he said, is &#8220;better than just reading about it.&#8221;

Weddle said that&#8217;s what the week is all about: having a good time while learning.