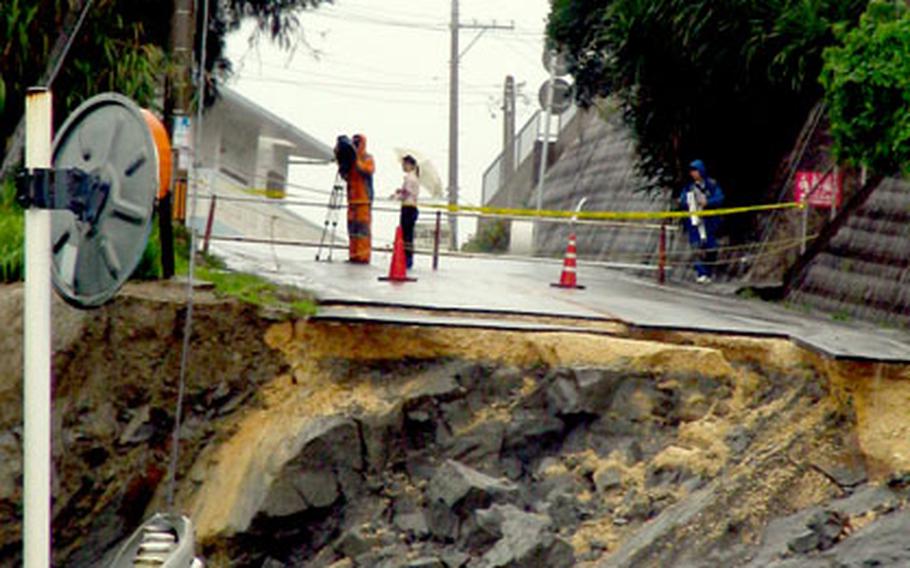 Recent rains caused a landslide in Nakagusuku village, near Camp Foster, Okinawa, last weekend, opening up a 164-foot gap in a local road. About 30 people in 11 families were evacuated from their homes. (David Allen / S&S)

Recent rains did more than delay the annual festival on Camp Kinser last weekend. The 4.5 inches of rain dumped on the island over the weekend caused several mudslides and washed out a 164-foot stretch of road on a hillside in the village of Nakagusuku, near Camp Foster.

No damage has been reported on any of the island&#8217;s U.S. military bases and the KinserFest was rescheduled for this weekend.

So much rain has poured down on Okinawa in the last week that local meteorologists predict this year&#8217;s rainy season might just knock last year&#8217;s 40.8 inches off the record books.

The rainfall for this year&#8217;s two-month rainy season already has exceeded the 17 inches predicted by the Okinawa Meteorological Observatory at the start of the season, which kicked off May 14, a week later than usual.

The rainy season is expected to last two more weeks.

Sadao Higa, an Okinawa Meteorological Observatory weather forecaster, said the total precipitation in May &#8212; 15.8 inches in central Okinawa, where the major U.S. bases are &#8212; was 155 percent of the average rainfall for the month. And rainfall for the first 11 days of June &#8212; 10.5 inches in central Okinawa &#8212; already has exceeded the annual monthly average of 8.2 inches, he said.

&#8220;Torrential rain is typical during the last half of the rainy season, although the rainfall this year, like last year, is far more than what we see in an average year,&#8221; Higa said. &#8220;The rain front has been stalled over Okinawa.&#8221;

He said the system may move slightly, but the range of movement is minimal.

&#8220;It makes it appear as if the rain front never moves, continuously pouring rain over Okinawa,&#8221; he said.

Higa predicted a short break in the rainy spell, with mostly cloudy skies Wednesday through Saturday. But the weather for Sunday is expected to be nonstop rain again.

Kadena Air Base&#8217;s weather flight on Monday forecast mostly cloudy days with isolated showers through Friday with highs in the low 80s and lows in the mid 70s.

In Nakagusuku, mudslides scraped a village road off a hillside in the Kita Uehara district Saturday. According to the Okinawa prefectural government&#8217;s Disaster Prevention Office, 30 people in 11 families were evacuated from their homes.

&#8220;Residents reported cracks in the road surface shortly after noon Saturday,&#8221; said Tsutomu China, assistant chief of the construction division of Nakagusuku Village Office. &#8220;Shortly after the road was closed for traffic, the mudslides occurred.&#8221;

The mud slid 330 feet to Highway 35, closing a section of that road, he said.