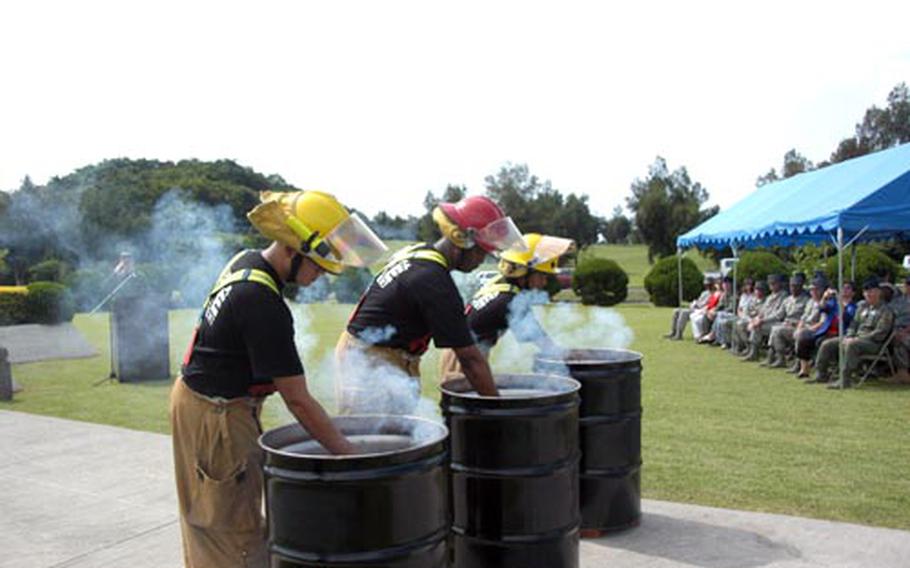 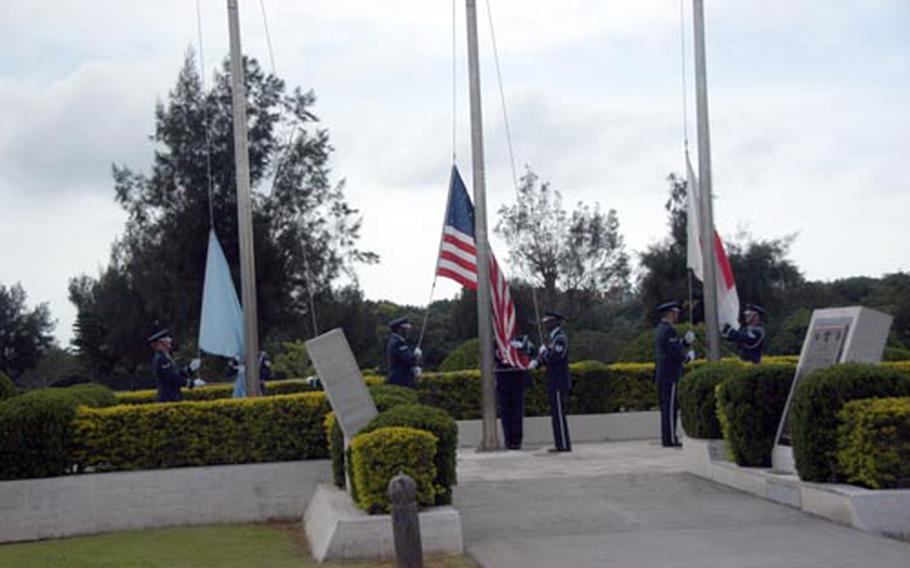 Kadena Air Base color guard retreat the commissioned flags displayed outside 18th Wing Headquarters. The three flags were placed in a bin to be properly retired and burned. (Natasha Lee / S&S) 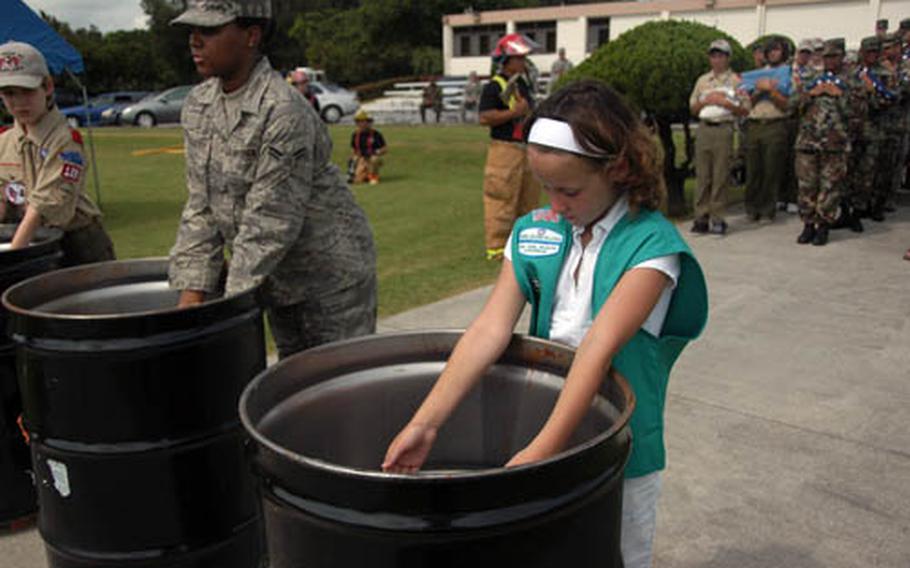 Shaina Franklin, 8, of Girl Scout Troop 445, places an unserviceable flag in a bin. Shaina was among dozens of local Girl and Boy Scouts who participated in the retirement ceremony. (Natasha Lee / S&S) 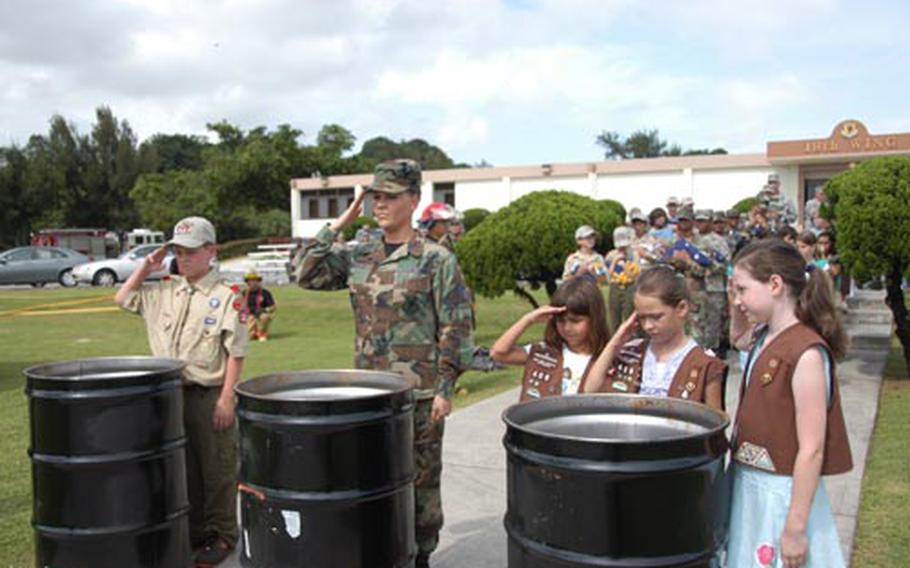 A group of scouts and an airman salute after placing old flags in a bin to be retired. (Natasha Lee / S&S) 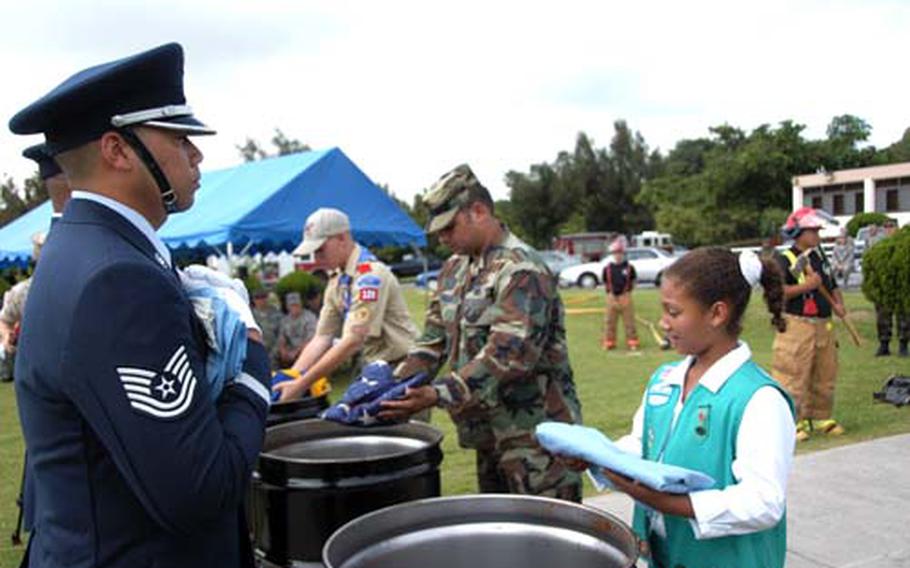 KADENA AIR BASE, Okinawa &#8212; At 8 years old, Shaina Franklin is too young to be in the service, but she knows the importance of the symbol that military members sacrifice their lives for.

"It stands for freedom," Shaina said about Old Glory.

Under a hot sun Friday, Shaina and fellow Girl Scouts from Troop 445 joined servicemembers in paying tribute to that symbol during a retirement ceremony of worn flags.

Clutching a folded American flag to her chest, Shaina marched slowly toward a large bin, where she placed the flag before giving a salute.

"My favorite part was when I put the flag in the barrel," Shaina said.

The ceremony drew about 200 servicemembers and families, and was held in front of the flagpole at 18th Wing Headquarters.

The ceremony was held to observe Flag Day, June 14, which recognizes the day the U.S. flag was adopted by Congress in 1777.

Brig. Gen. Brett T. Williams, 18th Wing commander, said the flags were a reminder of the sacrifices Americans have made to protect personal freedoms.

"That&#8217;s why many see blood in the red stripes of the flags," he said. "They (the flags) define who we are as Americans and that by no accident we have peace, liberty and security."

After the flags were placed in three large bins, firefighters from Kadena Fire and Emergency Services started the flames.

The ashes will later be buried near the flagpole in tribute to servicemembers who have died defending the country.

Friday&#8217;s ceremony was the first in two years, and was organized by the Air Force Sergeants Association, a nonprofit organization that represents the interests of airmen. Master Sgt. Stephen Fairbanks, president of the association, said he organized the ceremony to reinforce the value of the American flag, something he feels is taken for granted.

"I wanted to bring everyone together to witness this significant event," he said. "In this day and time, Americans sometimes fail to realize how important the American flag is to our great nation." Fairbanks said it was also important for the children to participate so they can learn the proper way to retire and respect a flag.

Flags that are worn, torn, tattered, faded or that have touched the ground are candidates for retirement.

Retiring and burning flags is a dignified way of ensuring worn flags don&#8217;t end up in the trash, Fairbanks said.

Ceremonies vary, with flags either being symbolically cut to separate the stripes and the stars, or folded and placed into a fire burner.

After the flags were lit, the crowd said the Pledge of Allegiance and then departed in silence.

Fairbanks said the ceremony left an imprint on the Scouts.

"I think it gave them a sense of pride. I hope they took something from it," he said.