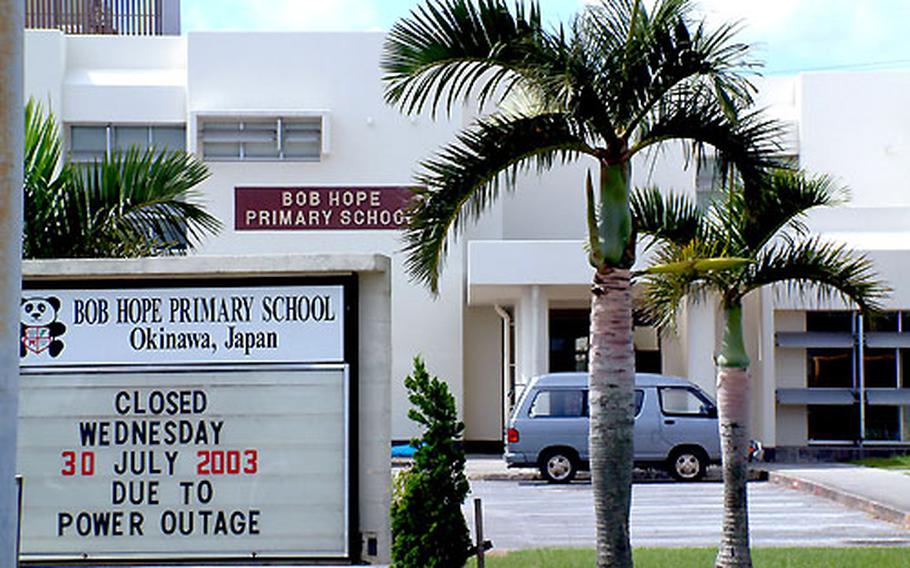 The halls were empty Tuesday at Bob Hope Primary School on Kadena Air Base, Okinawa, but officials said the year with open with commemoration of the school’s namesake. (David Allen / S&S)

KADENA AIR BASE, Okinawa &#8212; The halls were quiet at Bob Hope Primary School here Tuesday, but the passing of the school&#8217;s namesake did not go unnoticed.

&#8220;At the beginning of the school year we&#8217;ll get a committee together and plan to do something special,&#8221; said Gina Tash, a school secretary and one of only two people at work when the news of comedian Bob Hope&#8217;s death at the age of 100 made its way around the world.

Tash, 37, said school principal Shawne Cryderman called from a vacation in the United States to make sure the wheels are set in motion to do something special to commemorate Hope&#8217;s life after the school year starts Aug. 25.

President Bush designated Aug. 27, the day Hope will be laid to rest in a private funeral, as a day of tribute. The flags at all federal office buildings and military installations will fly at half-mast in the entertainer&#8217;s memory.

The school was built in 1980 and opened with 750 students in kindergarten through third grade. The students that year unanimously voted to name the school Bob Hope Primary.

The students chose Hope because he was a &#8220;famous comedian and great humanitarian, who has given graciously of his time and talents to bring joy to thousands of military men and women throughout the Pacific, dating as far as World War II,&#8221; according to the school&#8217;s Web site.

Hope wrote to the school to say he was honored by the gesture.

&#8220;I am flattered that you want to name an elementary school after me,&#8221; he wrote to a Defense Department school official in January 1981.

Although Hope is not well known to children today, principal Cryderman tries to make up for it by showing the students a documentary on Hope and occasionally talking to the students about the school&#8217;s namesake.