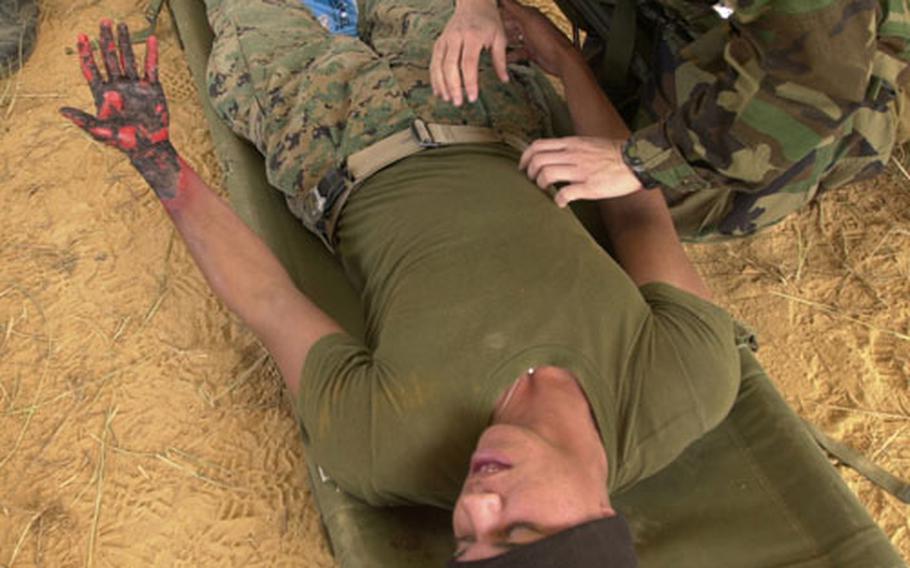 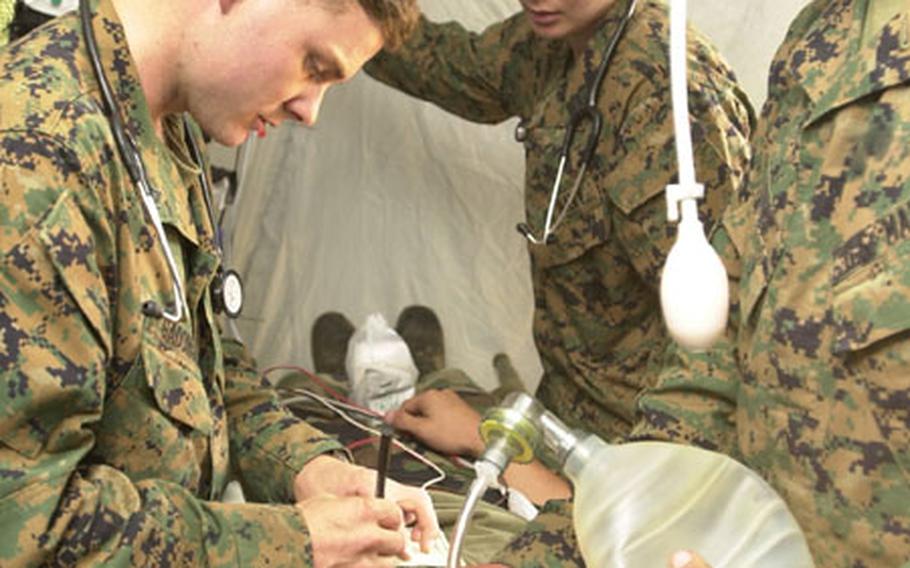 Corpsmen with the 3rd Medical Battalion on Okinawa treat and analyze a "patient" who is waiting to go into the operating room at the Forward Resuscitative Surgical System during exercise Autumn Endeavor Oct. 23 at Camp Hansen. (Fred Zimmerman / S&S) 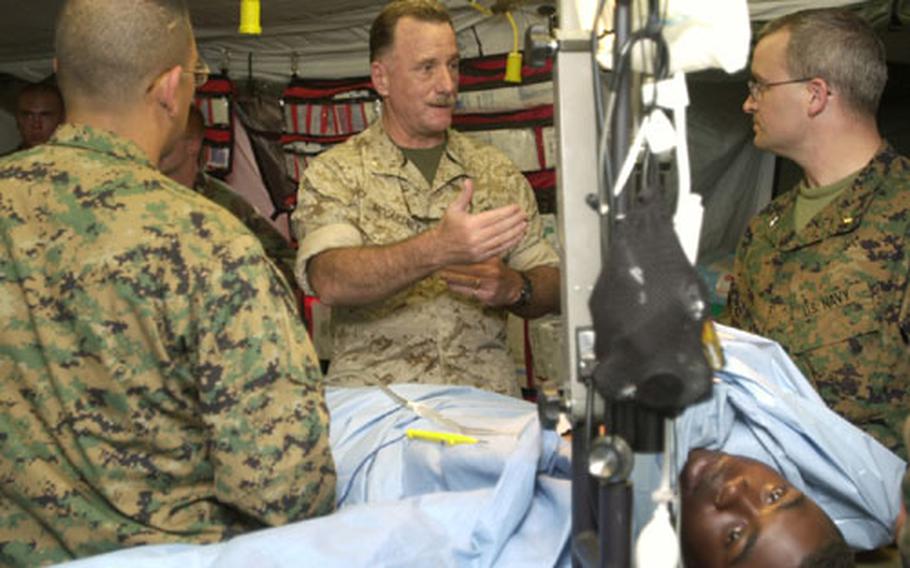 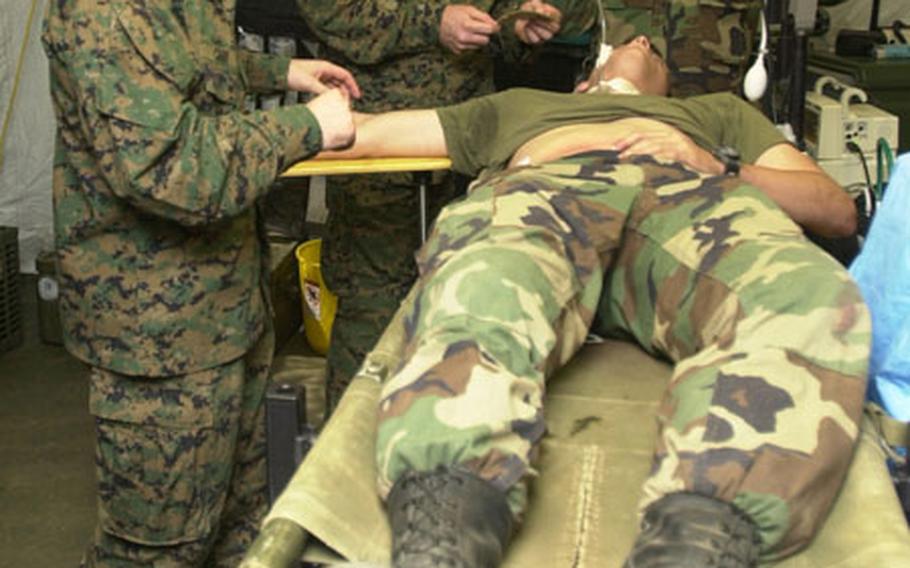 Navy surgeons prepare a simulated victim for "surgery" in the Forward Resuscitative Surgical System operating room Oct. 23 during exercise Autumn Endeavor at Camp Hansen. The FRSS is a mobile medical facility designed to be next to the front lines to treat the most critical troops. (Fred Zimmerman / S&S) 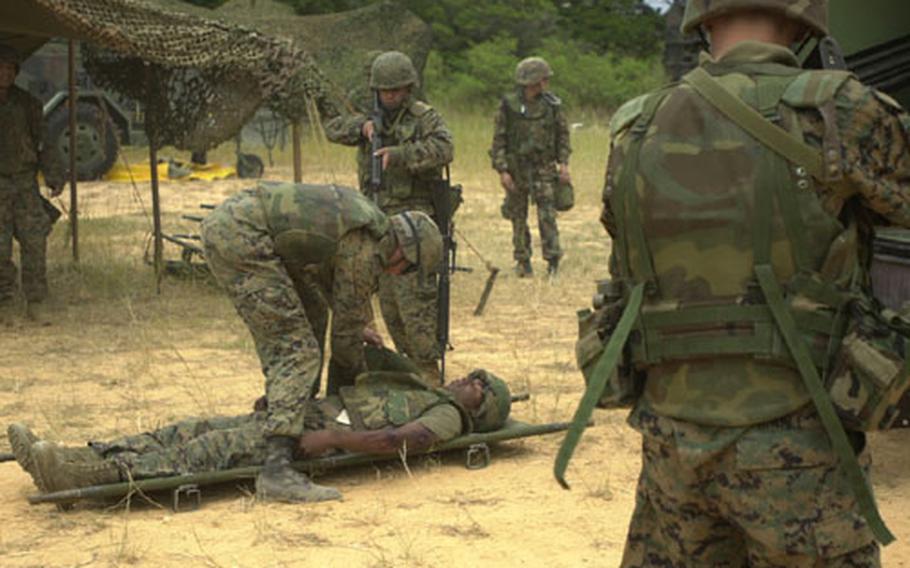 The medical personnel used the Forward Resuscitative Surgical System for the first time in a field environment during an exercise dubbed Autumn Endeavor.

The system is a mobile medical surgical shelter that can be set up near the front lines of combat, said Navy Capt. David R. Davis, the battalion commander.

By setting up near the action, the time between major injuries and treatment is greatly reduced and the chance of survival for troops increases, Davis said during a demonstration at Camp Hansen&#8217;s Landing Zone &#8220;Dodo.&#8221;

With the new system, when a patient comes in, the Shock Trauma Platoon first analyzes him or her.

The patient is stabilized and given a priority.

Those whose injuries are not life-threatening are evacuated to a surgical company about 30 miles from the fight, said Navy Capt. Stephen F. McCartney, group surgeon for the 3rd Force Service Support Group.

The wounded who probably would die if care were delayed are taken for immediate care.

&#8220;Out of those who are [critically] wounded in combat, five out of 10 will die immediately,&#8221; said McCartney, who was part of a Forward Resuscitative Surgical System during Operation Iraqi Freedom.

McCartney said before the system came to fruition, the average time from a serious injury and surgery could have been four hours or more.

In Iraq, he said, the average time between injury and surgery was about 30 minutes, a big difference when trying to save a life.

He said they were so close to the front lines that while working on patients, they could hear firefights in the distance.

During last week&#8217;s training exercise, simulated patients were flown into Landing Zone Dodo and were taken to the Shock Trauma Platoon/FRSS.

The platoon analyzed each patient and began treatment.

They then prioritized the patients and determined who could make it back to the Surgical Company, which was set up on Kin Blue Beach.

Those with life-threatening injuries were rushed into the FRSS, with the most critical making it into the operating room first.

Surgeons then simulated life-saving surgeries before prepping their patients to make the trip to the Surgical Company for further care.

He said that instead of completing the surgery and going through what could be a lengthy process of closing up the patient, he&#8217;s trying to train the doctors of the FRSS to perform the life-saving surgery, wrap the wounds up and arrange transportation back to the Surgical Company, letting them finish the process.

The FRSS just doesn&#8217;t have the time to complete the surgeries, he said.

McCartney said that while it increases the chance for survival, planners are still concerned about having valuable assets and surgeons near the front lines.

But he added that Navy doctors are committed to the new system.