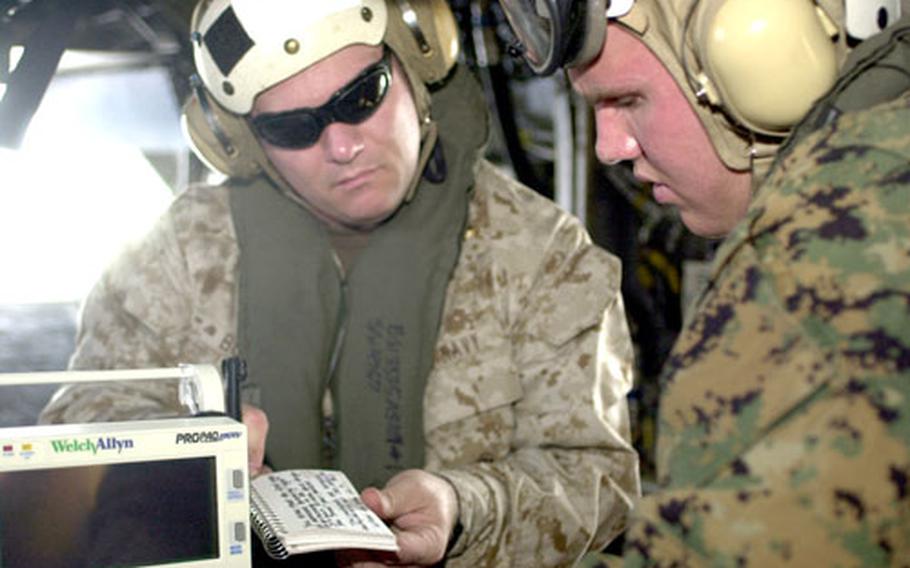 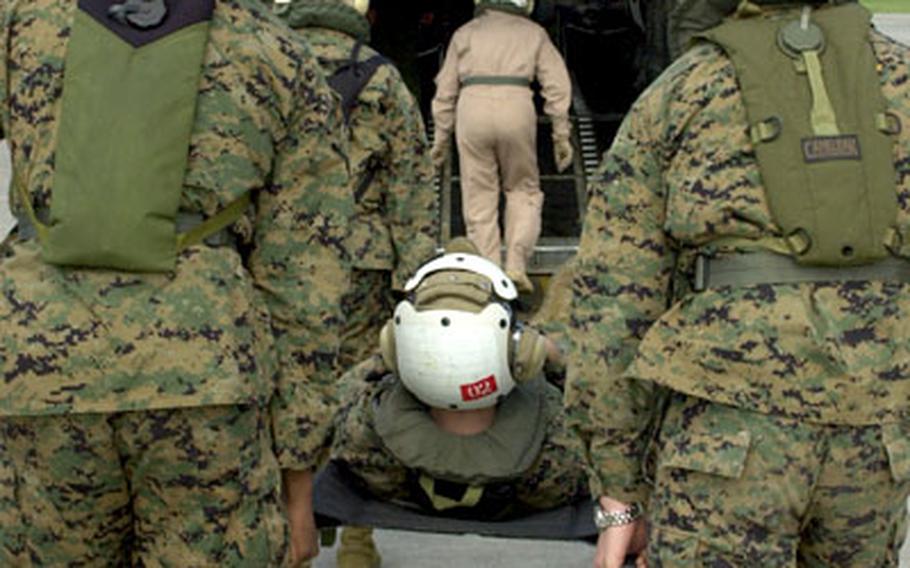 Navy medical personnel load a stretcher onto a CH-46 helicopter from Marine Medium Helicopter Squadron 265 on Marine Corps Air Station Futenma, Okinawa, on Wednesday. The sailors were taking part in training on the En Route Care System, which is designed to help get critical but stable patients from one echelon of care to another on the battlefield. (Fred Zimmerman / S&S)

MARINE CORPS AIR STATION FUTENMA, Okinawa &#8212; Nearly 40 sailors from medical units throughout Okinawa completed three days of training on a relatively new health-care system designed to save lives on &#8212; or above &#8212; the battlefield.

The Marine Corps implemented the new En Route Care System at the beginning of this year, said Lt. Cmdr. Tony Catanese, an assistant director at the Naval Operational Medicine Institute in Pensacola, Fla. Catanese said the system is designed to help caregivers transport critical but stable patients, typically by helicopter, from one echelon of care to another.

The En Route Care System &#8212; made up of equipment such as a suction machine, ventilator and vital signs monitor &#8212; is placed on a frame that can be clamped over a patient on a military stretcher. The 3rd Medical Battalion, based out of Camp Hansen, will receive 16 of the units in the next fiscal year, said Navy Lt. Scott Avery, the battalion&#8217;s training officer.

Sailors who received training on the equipment went through 26 hours of classroom and scenario-based exercises to &#8220;activate critical thinking skills,&#8221; Catanese said. Included in the training were static drills on helicopters and a final &#8220;life flight drill&#8221; in the skies over Okinawa.

On Wednesday, as CH-46 helicopters from Marine Medium Helicopter Squadron 265 cut through the air, at times making hard banking turns, the students individually were given patient scenarios and asked to point out equipment they would use in response.

Catanese, who along with his team of nurses is responsible for training all who use the equipment, said sailors such as Suchman are exactly whom his office had in mind for such training.

Avery said the training held this week was one of three phases for becoming an en route caregiver. To be fully trained, he said, personnel must go through a Navy certified helicopter dunker to learn how to perform a water evacuation and must attend the Army&#8217;s Flight Medic Course.

Avery compares the training on components of the En Route Care System to Marines learning how to work with their rifles.