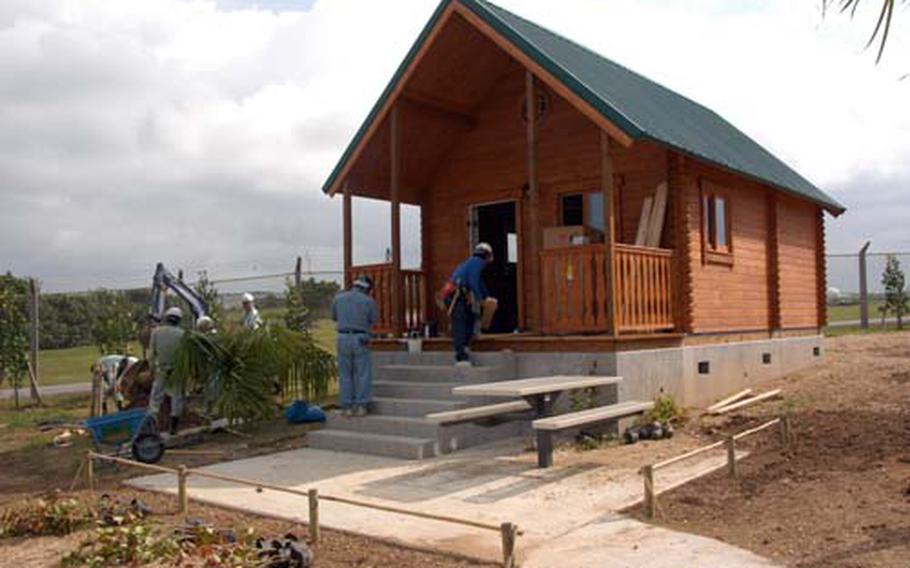 Workers install palm trees and work on the exterior and interior of a beach cabin at Torii Station. The cabin is one of four newly built cabins on the beachfront facility. (Natasha Lee / S&S)

Torii Beach will open this season with a $1.6 million face-lift that includes the addition of four beach cabins, a splash fountain, and upgrades to CJ&#8217;s Bar and Grill, Evers said.

The project was designed to give Torii beach a more resort-style flair, he said.

The water slide has been spruced up, and a removable boardwalk was added.

The four new cabins, expected to open for guests in June, bring the number of beachfront huts to eight and will feature flat-screen TVs, refrigerators and full showers.

Construction began in October, and staff members are putting the finishing touches on the outdoor restaurant area, he said.

"Before, things didn&#8217;t really flow together, and now they will."

A new pavilion will host live performances during the base&#8217;s summer music series on weekends from May 2 through Sept. 5.

Free shuttle service will be provided from Kadena Air Base&#8217;s Emery Lanes to Torii Station during the music series from 5 p.m. to midnight Fridays and Saturdays.

Transportation: Free bus service will run from 10 a.m. to midnight from Kadena Air Base Emery Lanes to Torii Station