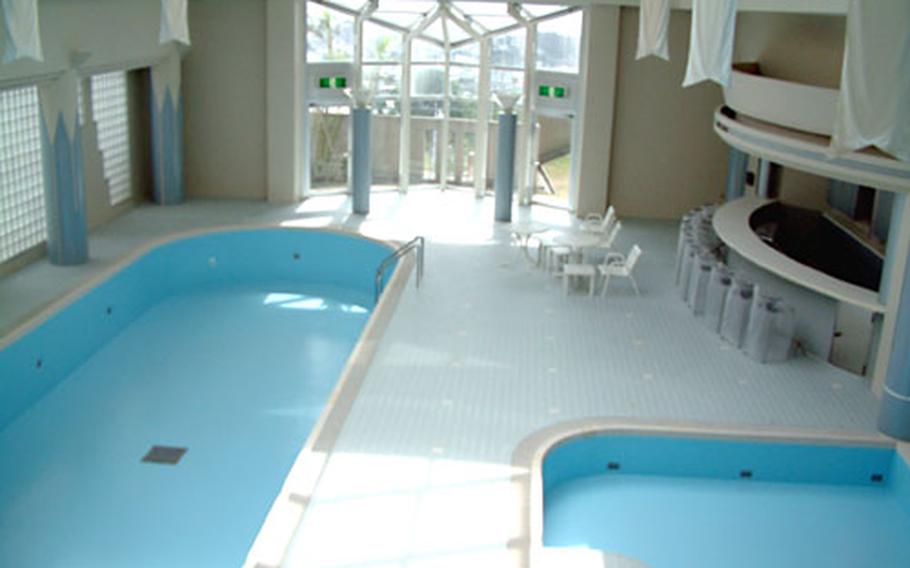 The pool area of the new Hotel Grand Mer features a heated swimming pool, a children&#39;s pool, a snackbar and an 8-meter dive tank. It also has a sliding roof to let in the Okinawa sunshine. (David Allen / S&S)

The pool area of the new Hotel Grand Mer features a heated swimming pool, a children&#39;s pool, a snackbar and an 8-meter dive tank. It also has a sliding roof to let in the Okinawa sunshine. (David Allen / S&S) 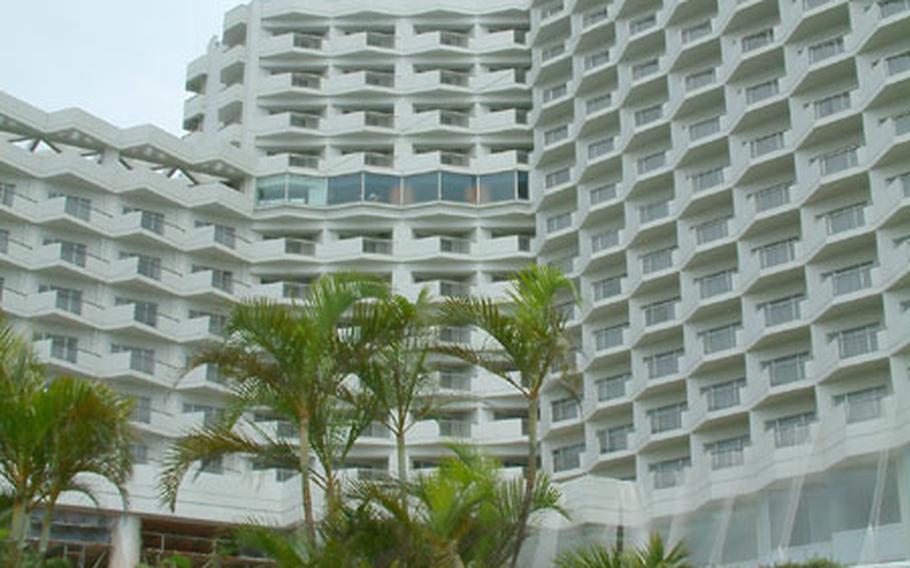 The Hotel Grand Mer, built in 1992, will finally open for business this summer in Okinawa City. All 302 rooms have an ocean view and special discounts will be offered to U.S. servicemembers and their families. (David Allen / S&S)

OKINAWA CITY &#8212; A 14-story hotel built more than a decade ago and kept dark by bankruptcy finally will open its doors in June.

A Hawaii-based management company plans to convert the Hotel Grand Mer Okinawa, on a hill overlooking Nakagusuku Bay on the east-central coast, as a &#8220;three star hotel with five star service&#8221; for Japanese tourists and the U.S. military community.

&#8220;We believe we will fill a niche no one else is really addressing,&#8221; said Allan Takahashi, Capital Realty K.K. hospitality division vice president.

&#8220;We are very excited about the opening of this hotel in Okinawa City, which will provide spacious accommodations for the numerous sports groups, families, repeat visitors and inbound travelers that visit Okinawa City annually,&#8221; he said.

The Grand Mer has 302 rooms, from suites to Japanese-style tatami rooms. For long-term guests, 56 rooms are being converted into studio apartments with microwave and convection ovens, sinks, large refrigerators and other amenities.

Takahashi said the hotel will work closely with the temporary lodging facilities on U.S. military bases on Okinawa to provide rooms when the lodges are filled to capacity during the busy summer months, when most families arrive on Okinawa to begin new tours of duty.

Construction of the Grand Mer started during the heady days of Japan&#8217;s economic boom but the hotel never opened, a victim of the economic bubble&#8217;s burst in 1992.

The owner defaulted on the mortgage; the builder, Shimizu Corp. of Fukuoka, took ownership and has maintained the building ever since, in hopes a buyer would come along, company officials have said.

The hotel almost became part of the Marine Corps Community Services operation on Okinawa in 1999, when MCCS considered leasing the property and operating it as a resort hotel similar to other military resorts in Hawaii and the United States.

That plan fell through, however, and a skeleton staff maintained the massive building until Capital Realty stepped into the picture, Takahashi said.

He would not disclose how much the hotel cost Marine International, a Tokyo-based real estate firm that contracted with Capital Realty to manage the property. He said the Grand Mer will have a &#8220;soft&#8221; opening June 1 with a grand opening on July 1.

The hotel is within easy driving distance of Kadena Air Base, Marine camps Foster and Lester, Futenma Marines Corps Air Station and the Army&#8217;s Fort Buckner. It also is a short distance from the military&#8217;s Awase Golf Course and many Okinawa City attractions, such as the city zoo, Awase Marina, and the Okinawa Comprehensive Park, where many sporting events are held.

&#8220;In fact, our first customers will be several hundred students visiting Okinawa next month for a high school basketball tournament,&#8221; Takahashi said.

Special military rates will start at 9,500 yen (about $84.60) and increase according to the size of the rooms and the height of the floor where they are located. The most expensive room will be a suite for 19,000 yen (about $169).

Takahashi said he is considering a similar discount for residents of Okinawa.

The pricing is different from most Okinawa hotels.

Other amenities include an indoor swimming pool, a children&#8217;s pool area with snack bar and an 8-meter dive tank for scuba lessons. The entire pool area is covered by a sliding roof to let in the Okinawa sunshine. Each locker room has its own sauna; plans are to convert a meeting room into a small workout room.

The hotel has two large restaurant. The Ocean Caf&#233; and Restaurant on the main floor will have an Internet caf&#233; and live music Thursday, Friday and Saturday evenings. A Japanese restaurant also is to open; a 10th-floor bar called the Shisha Lounge has a panoramic ocean view and an open-air terrace for private parties and receptions.

Each floor will have vending machines and coin laundry facilities.

The hotel is in a densely populated urban area so a two-tier parking garage will be built nearby to be handle 80 additional parking spaces, hotel officials said.

Schenck retired from the Army after 35 years, including some seven years as managing director of the Department of Defense&#8217;s Hale Koa Hotel in Honolulu.

He added that Capital Realty also operates the Hotel Santa Fe in Guam and plans to cross-market by promoting special packages for persons traveling between the islands.