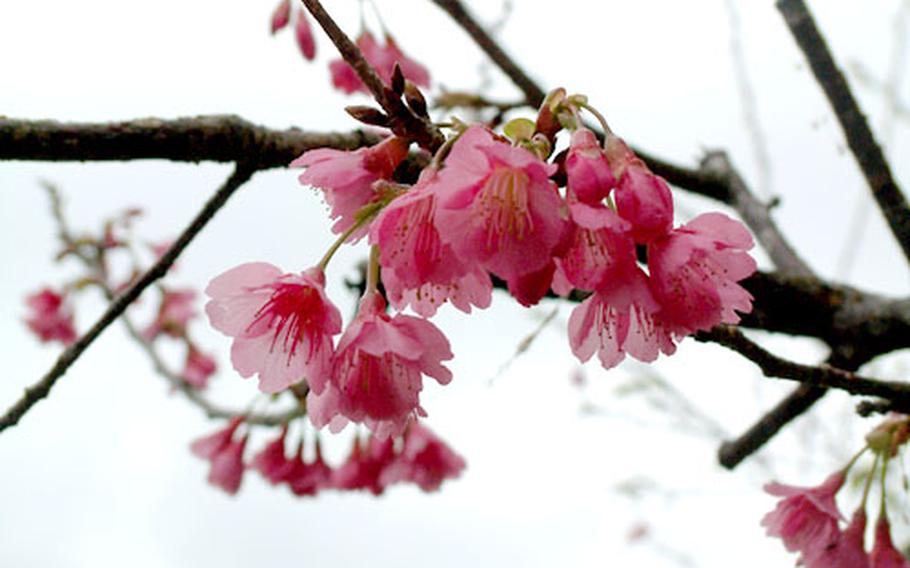 Japan&#39;s first cherry blossoms are in full bloom on Okinawa, especially in the island&#39;s north. These were found along a mountain road in the village of Kunigami. (David Allen / S&S)

More than 268,000 people swarmed to this northern Okinawa city last weekend for the annual Cherry Blossom Festival and, despite the chilly, rainy weather, the trees sported bright pink in all their glory.

Okinawa celebrates the start of Japan&#8217;s cherry blossom season months before the rest of the country even thinks of picnicking beneath the trees. Nago has the biggest of several such festivals, with 20,000 trees blanketing the hill from the city&#8217;s center to the ruins of Nago Castle.

And in nearby Motobu, some 7,000 cherry trees line both sides of the road leading to the top of Mount Yaedake. The festival there in mid-January drew about 23,000 visitors.

Unlike the fragile mainland Japan cherry blossoms, which disappear in less than a week, the hearty Okinawa blossoms of the Hikansakura cherry trees are a darker pink and smaller than the bright, whitish-pink blossoms of the mainland.

But no matter where, cherry blossom season is a cherished ritual in Japan, celebrated since the seventh century in poetry and paintings. It&#8217;s a time of welcoming the spring with picnics and parties.