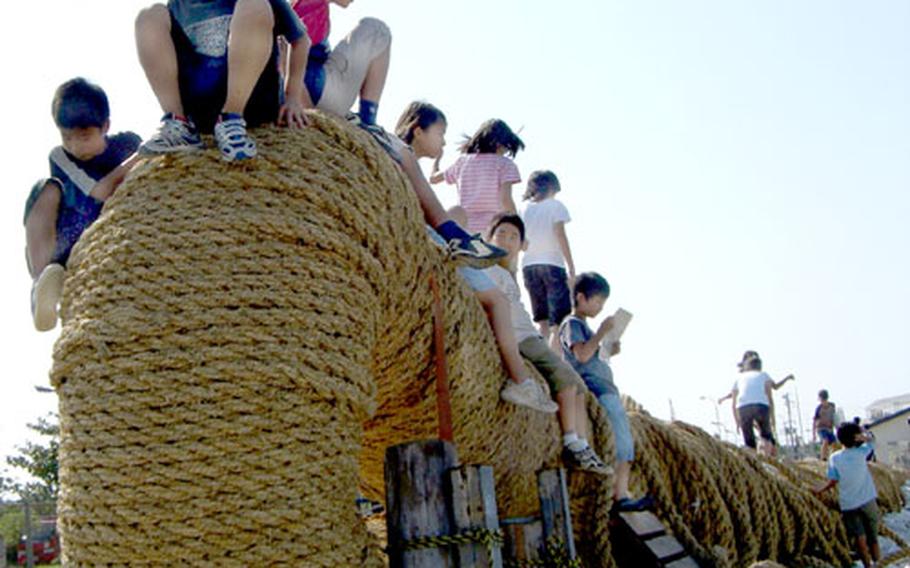 Japanese school children play on the Naha Great Tug-of-War rope during a field trip to the Naha Military Port, where the 10-foot high, 660-foot long rope is constructed each year. (Chiyomi Sumida / S&S)

Japanese school children play on the Naha Great Tug-of-War rope during a field trip to the Naha Military Port, where the 10-foot high, 660-foot long rope is constructed each year. (Chiyomi Sumida / S&S) 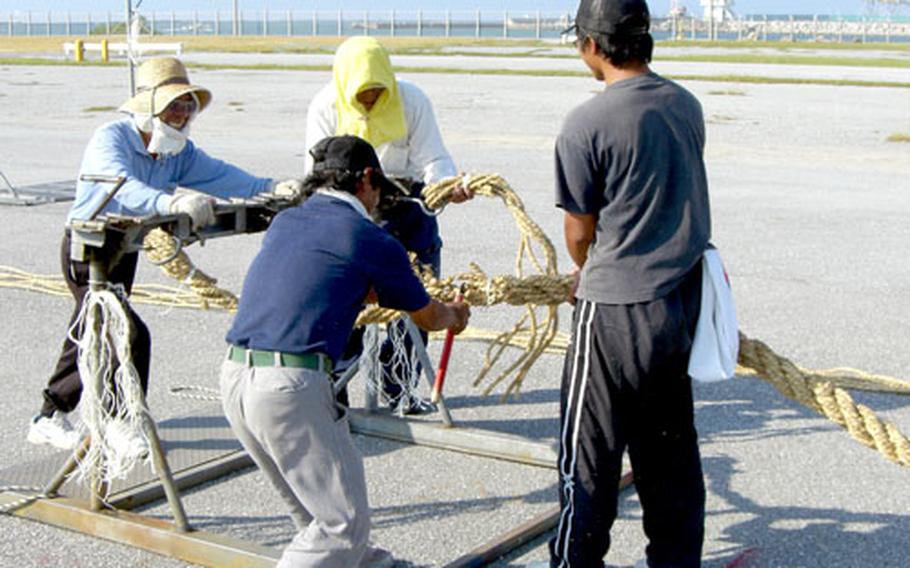 Jiro Uehara, a fisherman who takes time away from the sea to help build the tug-of-war rope, cuts a completed rope from the machinery used to twist it together. (Megan McCloskey / S&S) 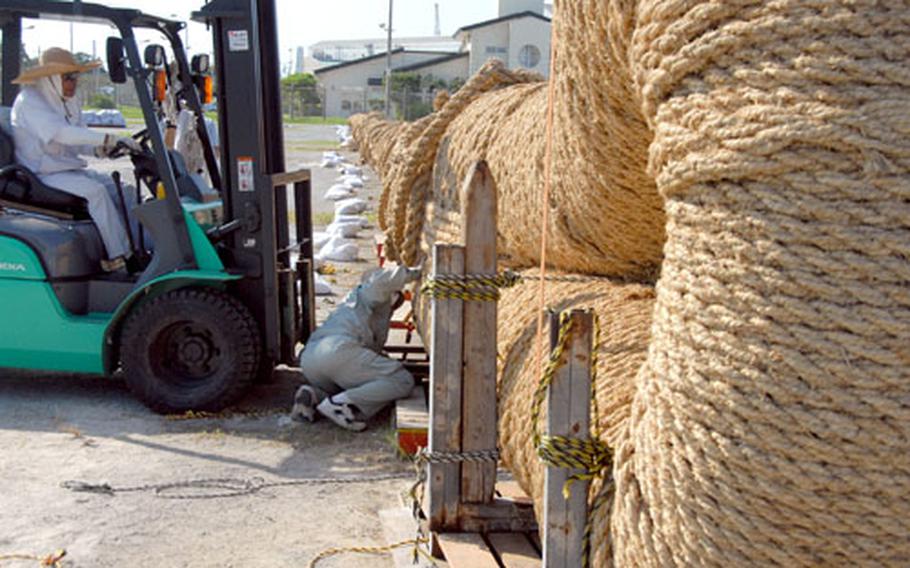 Lifting the tug-of-war rope takes heavy machinery. One worker operates the forklift so others can secure the smaller ropes used for pulling during the contest. (Megan McCloskey / S&S) 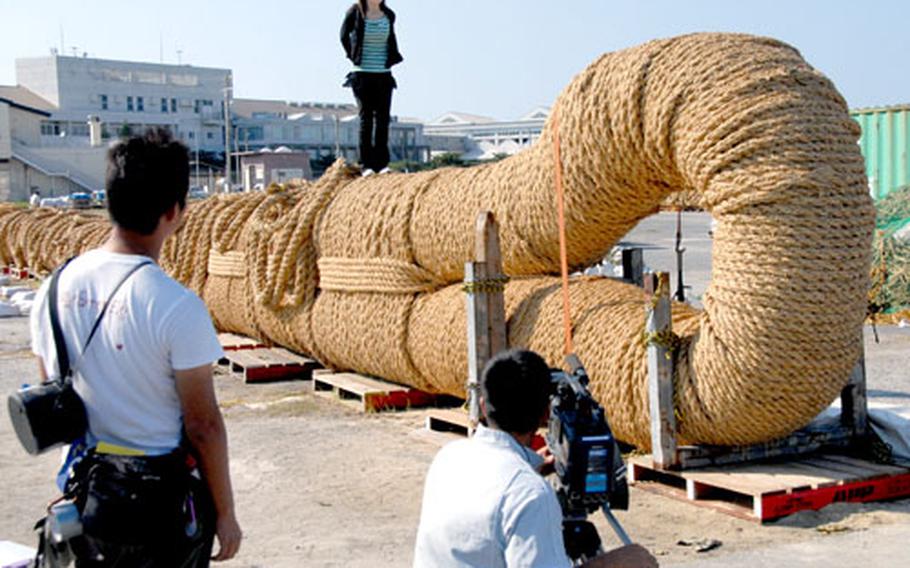 A Japanese broadcast journalist files her report about the crafting of the Naha Great Tug-of-War rope as she walks across the top of it. The contest draws a crowd of more than 250,000 each year. (Megan McCloskey / S&S) 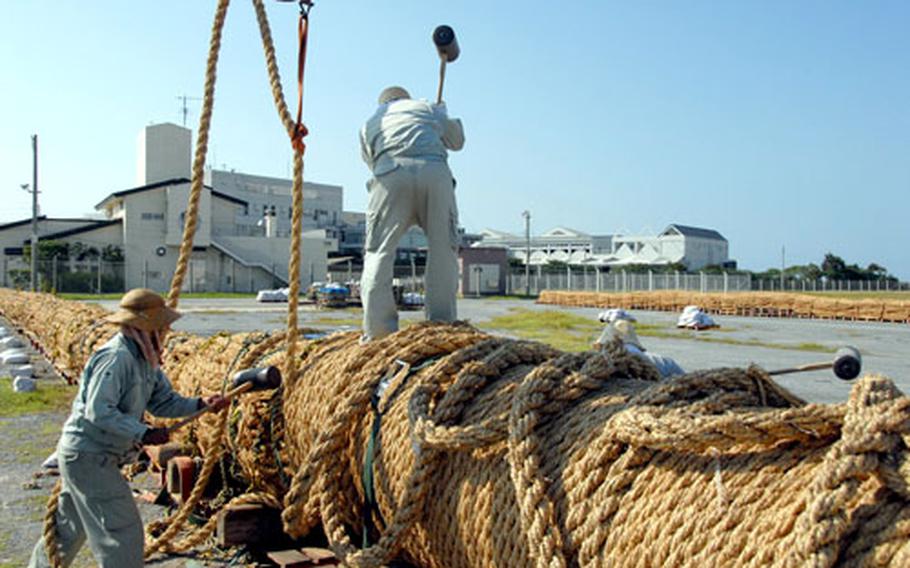 Workers use mallets to soundly secure the pulling ropes into place on one of the 330-foot sections of the tug-of-war rope. (Megan McCloskey / S&S)

NAHA MILITARY PORT, Okinawa &#8212; It takes 16 workers a full six weeks. It takes more than $170,000 and a stupendous heap of rice straw imported from Taiwan.

It also takes a good dose of teamwork to make one of the largest ropes in the world for the annual Naha Giant Tug-of-War, when residents of the west and east sides of Naha tug away for bragging rights for the year.

The final product is about 660 feet long and weighs 43 tons.

The process starts with a core that has been used for the past 15 years. Then many smaller ropes, made by twisting the straw together, are tightly wrapped around it to build the rope out to its full diameter.

The rope is built in two sections. Each is more than 300 feet long and with one end turned over on itself to form a giant eyelet, so the two parts can be fitted together at the festival.

A forklift is used to wrap the smaller strands around the core. Looking a bit diminutive in both size and effort as they stand atop the rope, two or three workers pound the smaller ropes into place with heavy hits of a mallet.

The giant rope is finished off with pulling ropes that serve as hand-holds as tug-of-war participants try to heave the rope to their side of the line.

Jiro Uehara, 61, takes time off each summer from his job as a deep-sea fisherman to lend his talents to the process. He&#8217;s done so for the past five years.

Historians claim the tug-of-war started in the 17th century, but the contest&#8217;s latest incarnation has been around for just 35 years. Still, it&#8217;s already become a popular annual island event.

More than half the $170,000 cost of the rope is donated by Naha residents, said Taizan Maezato, Naha Tug-of-War Preservation Association director; more comes from various local government units. The contest itself draws a quarter-million people &#8212; including the 15,000 volunteers who actually tug the rope. Cheering them on: Fourteen teams, in traditional Okinawan costume, representing each of Naha&#8217;s communities.

And after all the tugging, the crowd begins hacking at the rope: Okinawan lore holds that cutting a piece of it to take home after the contest brings good luck.