Buy Photo
Okinawans opposed to the U.S. military picket Oct. 8 outside a hotel where the prefecture's governor and ministers from Tokyo met to discuss the relocation of Marine Corps Air Station Futenma. (Travis J. Tritten/Stars and Stripes)

Buy Photo
Okinawans opposed to the U.S. military picket Oct. 8 outside a hotel where the prefecture's governor and ministers from Tokyo met to discuss the relocation of Marine Corps Air Station Futenma. (Travis J. Tritten/Stars and Stripes) Buy Photo
Okinawa Gov. Hirokazu Nakaima, shown here during a meeting in October, is expected to decided this winter whether to allow new offshore runways to be built as a replacement base for Marine Corps Air Station Futenma. (Travis J. Tritten/Stars and Stripes) Buy Photo
Okinawa tuna fisherman Tsukasa Higa says Tokyo's offer to lift fishing restrictions in part of a nearby ocean training area used by the U.S. military could boost his catches and help him make more profit in the difficult industry. The national government hopes the concession will convince Okinawa to accept the relocation of Marine Corps Air Station to a new U.S. base farther north. (Travis J. Tritten/Stars and Stripes) 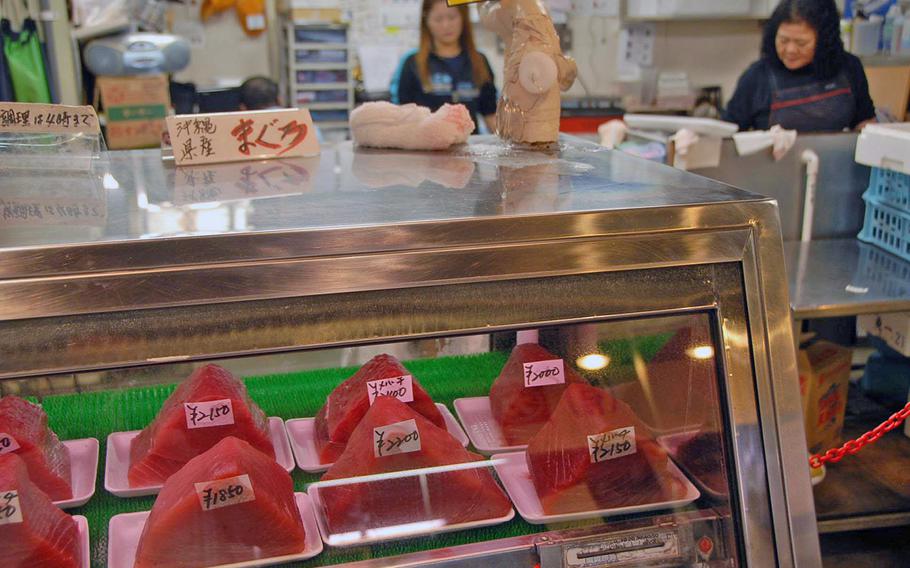 Buy Photo
Slabs of tuna freshly delivered by local fishermen are marked for sale at the Tomari port in Naha, Okinawa. (Travis J. Tritten/Stars and Stripes) CAMP FOSTER, Okinawa — Okinawa is set to check some items off its military affairs wish list.

U.S. and Japanese officials have offered a series of concessions this month to the prefecture — the unwilling host to the bulk of American military forces in the country — as its decision nears on whether to allow construction of a key new Marine Corps airfield.

But sweeteners appear to have had little effect so far on Okinawa’s governor, who has spoken out against the military presence and will make the call this winter on whether Marine Corps Air Station Futenma can move to offshore runways farther north.

With the decision looming, some think Okinawa is poised to reject a U.S.-Japan basing plan nearly two decades in the making. The two allies say no other options are on the table.

Defense Secretary Chuck Hagel and Secretary of State John Kerry met with their Japanese counterparts in Tokyo on Oct. 3 and highlighted efforts to placate the prefecture.

Three key concessions were showered on Okinawa in an effort to smooth the airfield approval, picked from a list the prefecture has been pressing for years.

There is an invisible line in the ocean east of Okinawa that tuna fishermen such as Tsukasa Higa can never cross.

The global positioning system on Higa’s boat, the Yuko Maru, marks the boundary of Hotel-Hotel, an 8,000-square-mile military training area and restricted zone.

The training area has squeezed island fishermen for years and put more pressure on an already-tough industry. Higa and others can only watch the diminishing stocks of Bluefin and Yellowfin tuna dart across the boundary line and disappear as U.S. fighter jets scream through the sky in the distance.

Okinawan fishermen have longed to fish the training area waters, where they believe hauls might improve, Higa said. During the meeting in Tokyo, the U.S. and Japan suddenly announced that the fishing boats may be allowed into a section of Hotel-Hotel as early as November. The two governments agreed to draft an access plan.

The change would likely only affect four to six commercial fishing boats, the chairman of a local fishing cooperative told Stars and Stripes. But Okinawa has complained to Tokyo for years over fishing rights, as well as access to military base land and U.S. crime.

After languishing for years, solutions appear to be on the fast track.

Okinawa may soon get its first detailed look at hundreds of acres of military land slated to be opened for civilian ownership and commercial development.

By the end of November, the U.S. and Japan has said it will hash out the details on allowing local surveys of base parcels that may revert to Okinawa control over the next 10-15 years, according to a bilateral plan to relocate Marine forces in the region.

Advance access could give the island a jump on planning development it hopes one day will boost the lagging local economy. It may also provide early warnings on military pollution, which remains controversial.

U.S. facilities returned in the past have had polluted soil. This summer, the Japanese government said it discovered herbicide and dioxin contamination on land once part of Kadena Air Base. The U.S. has no obligation to clean land before returning it, according to its five-decade-old status of forces treaty with Japan.

The U.S. and Japan have also agreed to begin notifying Japanese victims of the legal fate of Americans who commit crimes in the country but are tried in the U.S. military court system, Japan Minister of Foreign Affairs Fumio Kishida announced after the meeting with Hagel and Kerry.

Crimes such as sexual assault and drunk driving have stressed the U.S. military’s relationship with Okinawans for generations. Suspects are not always tried in Japanese courts, causing victims to complain about seemingly lenient sentences or unknown punishments issued in military court martials.

Tokyo showcased the concessions this month.

Kishida and Japan Defense Secretary Itsunori Onodera flew to the island days after the Tokyo to personally explain the offers to the prefecture government, which has long opposed the new airfield construction.

“We are fully aware of Okinawa’s stance on this, but at the same time I believe that our efforts have been recognized by Okinawa one by one,” Onodera said.

Okinawa Gov. Hirokazu Nakaima exited the Oct. 8 meeting with the ministers questioning the essence of the U.S.-Japan plan for Marine Corps air operations — the need to build a new replacement airfield on Okinawa in exchange for closing Futenma.

“They say it is the only solution from operational, political, financial and strategic standpoints to avoid the permanent presence of Futenma air station,” Nakaima said. “But that leaves me with lots of questions.”

The prefecture has called for the closure of Futenma —- an aging air facility set precariously at the center of a densely populated city — and for the relocation of Marine air operations outside its boundaries.

Nakaima said moving the base to an existing runway somewhere outside of Okinawa would be cheaper than building a new V-shaped offshore airfield.

“I am not convinced of the strategic point either,” Nakaima said. “The U.S. Marine Corps on Okinawa covers almost the entire northern hemisphere … so why must Futenma operations stay here on Okinawa?”

The Futenma relocation project may be in danger of rejection.

The recent concessions by Washington and Tokyo are unlikely to sway the Okinawans, said Mike Mochizuki, an associate professor of political science and international affairs and an expert on the island’s military issues.

“I don’t think it is sufficient” to earn the prefecture’s approval, Mochizuki said.

Under Japanese law, Nakaima must give permission before the national government can reclaim 395 acres of land to build the airfield in the prefecture’s near-shore waters. The local government is reviewing a 9,000-page environmental study and permit application from the Ministry of Defense.

Nakaima said the prefecture is looking at “practical and technical” issues and a permit decision is expected in December or January. The ministry has claimed the project will not damage the environment, but Okinawa has argued the impact on plants and animals might be high.

If Okinawa rejects the reclamation work, the Tokyo government could decide to force the project through with special legislation in the Diet, the national legislature.

Mochizuki warned against that approach, saying it would further sour the U.S. and Japanese relationship with the island. Instead, the two nations will likely need to negotiate with Okinawa this winter to devise a more acceptable plan for Marine air operations, including relocation outside the prefecture, he said.

Tokyo and Washington both claim there is no Plan B for relocating Futenma.

Since an accord in 2006, they have been steadfast that the only way to close the air station is to move it to a renovated Camp Schwab with a newly built airfield. Japan has agreed to foot the bill.

Department of Defense spokesman Lt. Col. Jeff Pool told Stars and Stripes this position has not changed. The department declined to discuss what would happen if Nakaima rejects reclamation work.

“We will not answer hypothetical questions on this matter,” Pool, a Marine, wrote in an email to Stars and Stripes.

Meanwhile, Okinawa seems poised to make some gains from the political wrangling.

Details of the fishing access, land surveys and victim notifications are still unknown and must be hammered out in the coming weeks. But they could mark a rare bright spot in relations with Tokyo over the island’s U.S. bases.

The future possibilities make Higa the tuna fisherman smile with excitement. Opening access Hotel-Hotel fishing grounds could turn his career fortunes and ease the years ahead.

“I really look forward to that happening,” he said. “Of course I will go there right away once it is opened.”