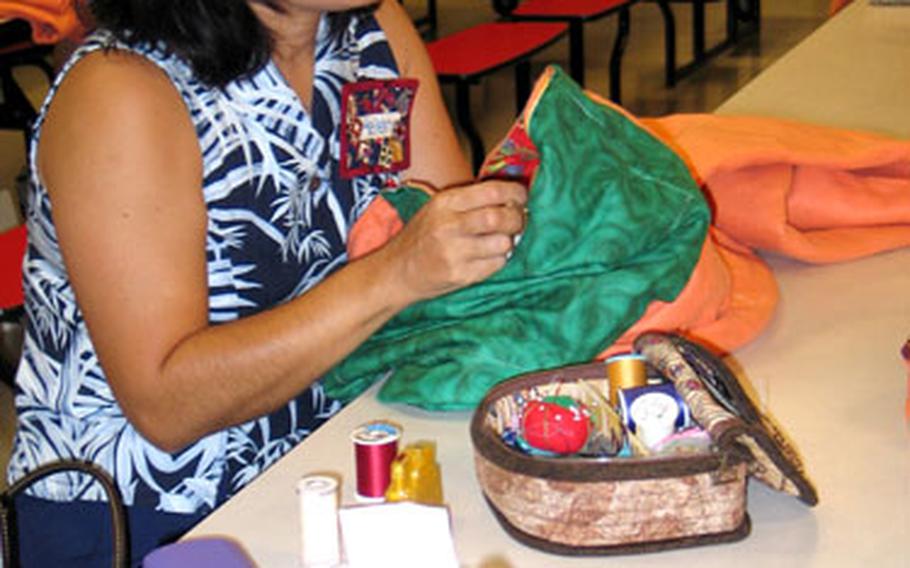 Helen Davis stitches up a “quillow” for Hurricane Katrina evacuees. The Pacific Patchwork Guild donated 37 of the quilt pillows after a recent quilting bee on Kadena Air Base, Okinawa. (Courtesy of Laura Aquiar)

Helen Davis stitches up a “quillow” for Hurricane Katrina evacuees. The Pacific Patchwork Guild donated 37 of the quilt pillows after a recent quilting bee on Kadena Air Base, Okinawa. (Courtesy of Laura Aquiar) 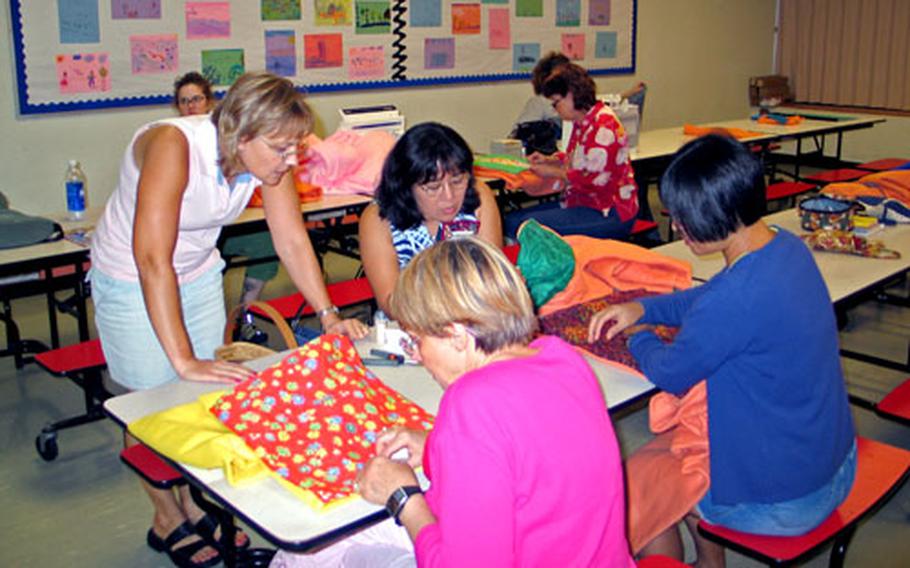 CAMP FOSTER, Okinawa &#8212; A few Hurricane Katrina evacuees will be able to rest their weary heads on &#8220;quillows&#8221; stitched and donated by an Okinawa quilting club.

Members of the Pacific Patchwork Guild recently stitched 37 quillows for the displaced people and another 34 baby blankets for younger victims, said Laura Aquiar, publicity chairwoman for the organization.

&#8220;A quillow is a small blanket which can be folded up into thirds and tucked into an attached pocket to look like a throw pillow,&#8221; Aquiar said.

&#8220;Like many others stationed on Okinawa, our members followed the news and wondered what they could do to help,&#8221; she said.

Club members got the idea from the Internet, where there was information from other quilting clubs concerning a project called &#8220;Quilters Comfort America.&#8221; The messages asked quilters for monetary donations for the American Red Cross and for quilts to help provide bedding for the thousands of refugees being housed at the Houston Astrodome.

Joyce Osborne, the club&#8217;s vice president, recently had made two quillows and showed other members how it was done, Aquiar said.

She said the nonprofit club bought 35 yards of fabric and eight fleece blankets at a special 75 percent discount from the AAFES exchange on Camp Foster. On Sept. 10 they gathered at Bob Hope Elementary School on Kadena Air Base for the marathon sewing session. Experienced and novice quilters participated, Aquiar said.

Aquiar said Helen Davis, a club member since 1996, said she couldn&#8217;t recall the guild ever tackling such a project.

It was like an assembly line, with some members cutting cloth while others sewed and ironed, she said.

Besides the quillows, the guild had a surplus of baby blankets it was preparing to donate to the U.S. Naval Hospital&#8217;s Neonatal Intensive Care Unit on Camp Lester. The club has been making baby blankets for the unit for the past six years.

&#8220;We decided we could donate the 34 we had on hand to the Katrina effort,&#8221; Aquiar said. &#8220;Guild member Anne Mullally&#8217;s brother is a priest at Notre Dame Church in St. Martinsville, La., which is east of New Orleans. The small parish is helping find accommodations for 1,000 refugees. The guild sent the baby blankets off immediately for babies there.&#8221;