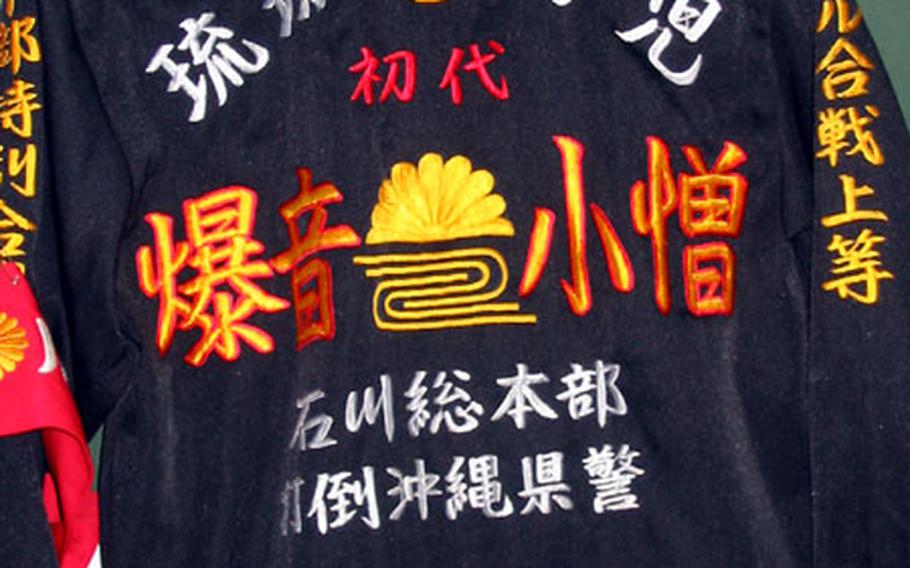 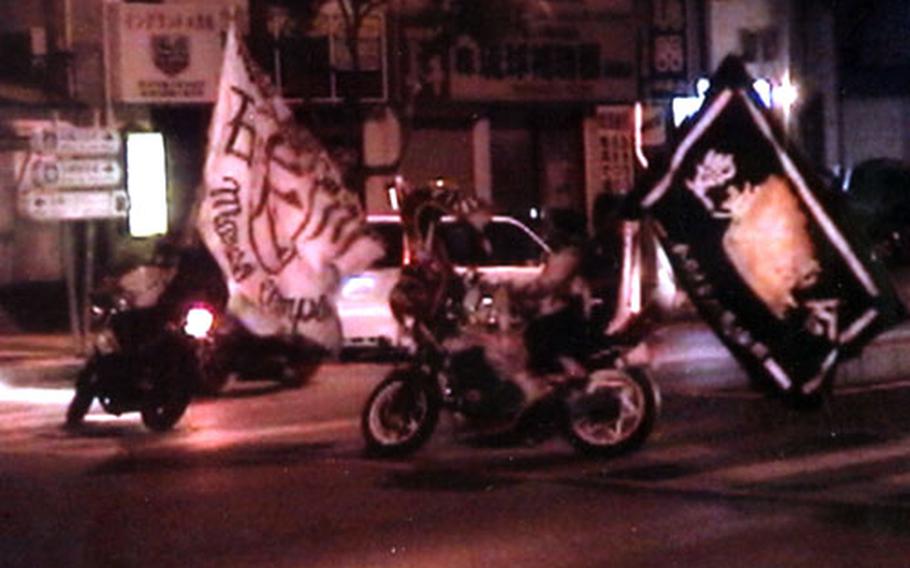 Okinawa&#39;s Bosozoku often defy traffic laws, making illegal u-turns on busy city streets to parade their colors. These flags announce that the Ishikawa "Noise Kids" are in town. The photo is from a police videotape. (Courtesy of Okinawa Police) 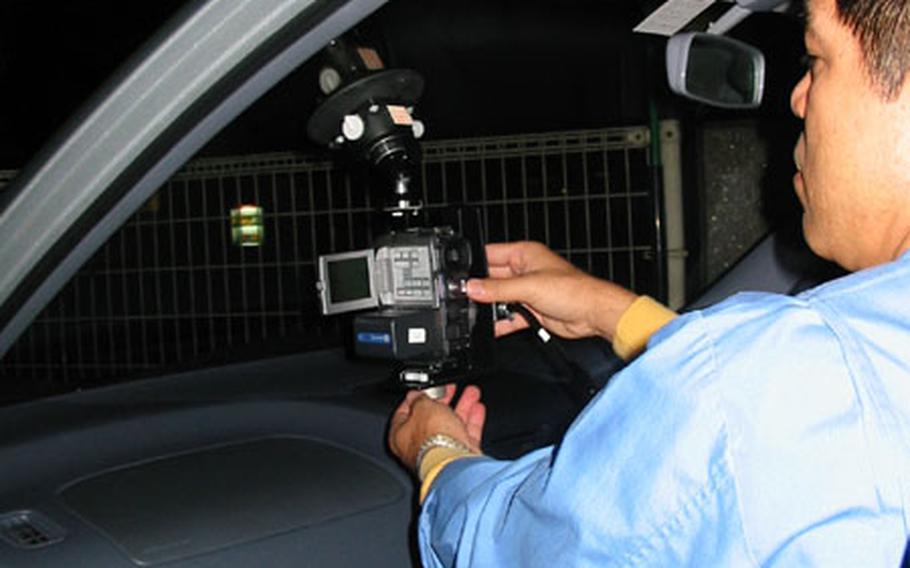 OKINAWA CITY, Okinawa &#8212; This city is quickly becoming off-limits to the bosozoku, the noisy gangs on mo-peds, motorcycles and muscle cars who pierce the night with the cacophonous roar of loud mufflers and hair-raising races down public roads.

And that goes for the hundreds of gawkers who crowd the sidewalks to cheer them on, too.

Okinawa Prefectural Police are in the midst of an islandwide campaign to clean up the bosozoku menace. Okinawa City recently passed an ordinance making it possible to charge their fans with illegal assembly.

So far, anti-bosozoku tactics, such as setting up checkpoints at popular rally sites and videotaping gangs&#8217; antics from unmarked police cars, have cut into the ranks of the youthful groups.

Many of the members, usually in their midteens, have been swept off the streets and slapped with heavy fines and jail terms for violating traffic laws.

Today, membership in some bosozoku outfits is considered a tryout for Japan&#8217;s organized crime gangs, the yakuza. Through new laws and new strategies for clamping down on their activities, Japanese authorities are attempting to break the back of the bosozoku cult.

It appears an uphill battle. On a warm night in Okinawa City earlier this year, among the spectators of a bosozoku rally were young elementary school students who rode their bicycles along the sidewalks, aping their older brothers and sisters.

Okinawa police say that American servicemembers and their families are usually not involved in the bosozoku activities except as spectators and as participants in the occasional late-night drag race in cars on major highways.

One of the most popular drag race sites is along Highway 58 near Kadena Air Base, police say. They emphasize that Americans are subject to the same traffic and public safety laws as anyone else on the highways.

The major differences between U.S. motorcycle gangs and the Japanese bosozoku are the gang members&#8217; ages and the vehicles they drive. Most of the bosozoku are teenagers, usually middle school and high school dropouts, riding cheap mo-peds missing mufflers.

&#8220;It&#8217;s the noise that drives you crazy,&#8221; said Pam Ackerland, a U.S. Marine&#8217;s wife who lives in an isolated cabin in Ishikawa, Okinawa. The mountain road past her home is a favorite gathering spot for bosozoku, who race along the winding road for hours uninterrupted by police.

&#8220;By the time we are called, they have disappeared,&#8221; one police officer said. Equipped with cellular phones, the gangs often post lookouts to report the arrival of police.

The one time one of her neighbors took matters into his own hands he almost was arrested himself.

The neighbor, an Irishman teaching English at a Japanese high school, ran after several bosozoku on mo-peds and in a car. He carried a heavy frying pan, whacking a mo-ped and the car when he caught up with them at a nearby scenic overview.

The bosozoku complained to police, who arrived at the Irishman&#8217;s cabin an hour later and searched his home for the weapon, which he had thrown away. They warned him to leave the bosozoku alone.

Although sometimes involved in petty thefts and intergang violence, the bosozokus&#8217; crimes are mostly being public nuisances. They shun road rules, often ignoring red lights and speed limits as their herds of bikes buzz-saw along the highways in the middle of the night. In tight groups of 20 or more, they sometimes spread out and block traffic as they cruise at a slow 10-15 mph.

Many of the mo-peds carry passengers, whose job, it seems, is to wave huge banners identifying the clubs and carrying taunting slogans aimed at the police, who at times follow with red lights flashing in vain attempts to get them to behave.

&#8220;It is too dangerous to pull over 20 or so at a time,&#8221; said Tatsuo Oshiro, assistant chief of the Okinawa Prefectural Police Department&#8217;s Bosozoku Task Force. &#8220;There is the danger of causing accidents and it is very easy for them to escape by weaving their way through traffic.&#8221;

Police on Okinawa needed a new tool for their war against the bikers, and Oshiro came up with it early last year.

He invented a way to hook up lightweight video cameras to the front windshields of unmarked police cars, using a simple rubber suction cup and a frame to steady the image. With the camera, police can record the bosozoku&#8217;s illegal antics, review the tapes later and file charges.

&#8220;The clear images made it easy to identify individuals involved with the boso,&#8221; Oshiro said.

Police began to use the device in July. So far, 25 gang members have been arrested and sentenced to stints in a juvenile detention center.

The maximum penalty for violating the Road Traffic Act, which prohibits bosozoku activities, is two years in prison and a 500,000 yen (about $4,168) fine.

The tapes are like something out of the TV show &#8220;COPS.&#8221; On one, the camera trails a group of a dozen bosozoku on mo-peds and lightweight motorcycles weaving their way through traffic on Highway 58 near Camp Foster. A passenger on the rear bike wields an 8-foot staff and whacks the hood of any car that comes too close.

He said that there is very little recidivism once a boso is sent to the slammer.

&#8220;There is one teenager who served a six-month sentence who still calls me now and then,&#8221; Oshiro said. &#8220;He tells me he is glad he was arrested. He realizes the seriousness of his misbehavior and its impact on society.&#8221;

Oshiro says the Okinawa bosozoku are relatively tame compared to the gangs in mainland Japan. Gang fights there are becoming more frequent, especially in Tokyo, where a teenager was battered to death last year after he was mistaken for a member of a rival gang. In Nagano, eight gang members recently were sentenced for abducting and beating a rival to death.

A former Tokyo boso, now living on Okinawa, said disaffected kids have many reasons for joining the bosozoku.

&#8220;Most of us were school dropouts who could not find our place in school or at home,&#8221; he said. He said about one-third of the bosos he rode with turned to lives of crime by joining the yakuza.

Leaving the gang was not easy.

The price to leave the gang was a few broken ribs, he said.

The numbers of bosozoku are climbing after a drop in the 1990s, police said. The National Police Agency places the numbers at 1,134 gangs throughout Japan with 23,700 members.

Police in Kanagawa prefecture, just south of Tokyo, estimate 47 bosozoku gangs with 2,400 members raising havoc there. In Tokyo, police peg the number of bosozoku gangs at 44, with about 1,000 members.

In Fukuoka prefecture, the bosozoku police have gone MAD &#8212; as in Motorcycle Arresting Devices.

The MADs are portable motorbike traps. When a biker rides over it, the trap springs open and an adhesive patch sticks to the rear of the bike. The patch is attached to a rope that then coils around the back wheel.

In Hiroshima, several other steps have been taken to move bosozoku from the streets. Last April, the prefecture made it illegal for the bikers to congregate in large numbers. Earlier this month, it made ties between the yakuza and bosozoku illegal.

Oshiro said about 55 percent are between 16 and 18. About 7 percent of the members are younger than 15.

Okinawa police say they receive some 300 complaints a month about the bosozoku.

Toguchi said the Okinawa gangs have no connection to organized crime.

He said a law passed by Okinawa City earlier this month will give police more power to crack down on the gangs.

The law, which takes effect in July, places a maximum fine of 100,000 yen, or $833, on persons who instigate and encourage bosozoku activities. Naha City is expected to pass a similar law soon.

&#8220;We believe that the ordinance will help police to tighten their control on the bosozoku,&#8221; said Yoshikazu Aoyama, chief of the Okinawa City government&#8217;s Citizens&#8217; Affairs Office. &#8220;Without the ordinance targeting onlookers, there was no legal ground for the police to restrict and punish their behavior.&#8221;

TOKYO &#8212; Every New Year&#8217;s Day revives an ongoing battle between the bosozoku and the police.

Around Japan, bosozoku, gangs driving modified cars and motorcycles gather for the year&#8217;s first run to get a glimpse of the new year&#8217;s initial sunrise. Catching it at Mount Fuji has become an annual ritual for bosozoku in the Kanto area.

They drive on highways to Mount Fuji, often pestering and tailgating other cars. They breeze through toll gates without paying and sometimes vandalize the booths.

At Mount Fuji, they get together on the streets or at parking lots and blast their engines, triggering complaints from neighbors.

Some take the Chuo expressway to Mount Fuji, so revelers heading out of Tokyo after New Year&#8217;s Eve should beware.

Every year, police come up with measures to crack down on the bosozoku. Last year, the Tokyo Metropolitan Police set up checkpoints on highways leading to Mount Fuji.

He said they usually set up checkpoints at the Mitaka and Hachioji tollbooths to regulate cars and motorcycles that clearly appear modified to look like bosos machines.

However, a study released by the National Police Agency at the beginning of this year said the number of bosozoku taking the first-sunrise-of-the-year ride is on decline.

A Japanese newspaper, Mainichi Shimbun, reported that the agency rounded up 1,414 people in 2000 for the gang-related activities. The 2000 figures, which show 52 arrests, represent a drop of 81 from 1999, when arrests were down by 40 from the previous year.