Okinawa protestors vow to thwart environmental survey for Marine base 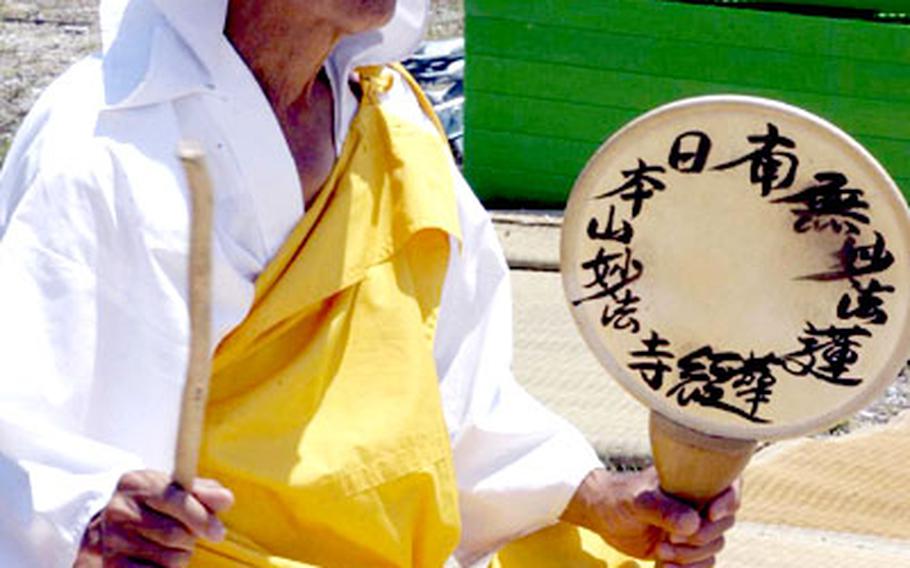 Hiroo Naganuma, a Buddhist monk, beats a drum for peace at Henoko&#39;s fishng port Tuesday. Nahanuma was one of about 50 protesters camped out at the port in opposition to plans to build a new U.S. Marine air station. (Mark Rankin / S&S)

Hiroo Naganuma, a Buddhist monk, beats a drum for peace at Henoko&#39;s fishng port Tuesday. Nahanuma was one of about 50 protesters camped out at the port in opposition to plans to build a new U.S. Marine air station. (Mark Rankin / S&S) 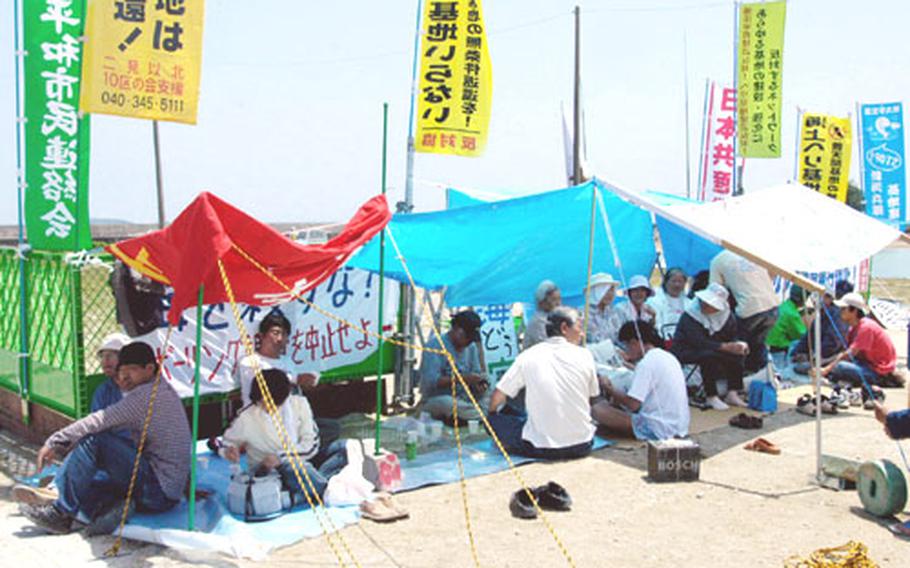 HENOKO, Okinawa &#8212; Anti-base activists and village residents are camped out at this tiny Northeast Okinawa port, intent on halting an environmental survey for a new Marine air station planned for the offshore waters.

About 50 protesters were at the port Tuesday, vowing to continue a protest that began Monday when they learned the Japan Defense Facilities Administration Bureau in Naha was set to begin an underwater survey in preparation for construction of an airport on reclaimed land and a reef.

The facility is supposed to replace the Marine Corps Air Station at Futenma, located in the heart of urban sprawl in central Okinawa. The new air station will be connected by a causeway to Camp Schwab.

On Monday, the DFAB canceled the survey work, citing poor weather. However, about 100 protesters clashed with 40 employees of a company contracted to put up a fence marking off work space for the survey. No injuries were reported and the workers left the area.

On Tuesday, about 50 people, half of them elderly residents, remained at the site vowing to prevent any work by DFAB contractors. The bureau had planned to send divers into the waters to survey the condition of the coral reef and an area where residents gather seaweed.

Environmental activists also have reported that the area is the northernmost feeding ground of the dugong, an endangered saltwater cousin of the manatee. Among the several protest groups camped out at the port is the Save the Dugong Network, which has expressed concern that the air station, which also will be used by civilian aircraft, will destroy the feeding ground.

Many protesters were elderly village women who said they have been fighting plans for the new base since it first was proposed eight years ago.

Kiyoko Miyagi, 77, said her group has about 20 women. They take turns staying at a nearby shack to keep an eye on any activity connected to the new base.

&#8220;We all believe it is our duty to hand down the beautiful sea to our children and grandchildren,&#8221; she said. &#8220;If worse comes to worse, we will go into the water and stop the construction with our bodies. We are prepared to die.&#8221;

She smiled broadly and said she was part of Monday&#8217;s skirmish with the fence builders.

&#8220;When they put up the fences, I was so upset. But after we successfully chased them away, I felt so good,&#8221; she said. &#8220;We will continue to fight. They said that the survey had been canceled because of bad weather, but that was just an excuse. The truth is that we chased them away.&#8221;

Miyagi served in the Himeyuri Students Nurse Corps during the Battle of Okinawa. Many of the young nurses were forced by Japanese soldiers to commit suicide rather than be captured by the invading Americans.

Nobuko Oroku, 83, who owns a thrift shop in the community, says she spends most of her time down at the port.

Sitting near her was Hiroo Naganuma, a Buddhist monk from the Nipponzan Myohoji temple in Nago.

Shigeji Sakihama, 73, a retired schoolteacher from Nago, also said he would lay down his life to stop the construction.

&#8220;The project has already proven to be a failure,&#8221; said Takuma Higashionna, an environmental activist and director of the Save The Dugong Network. &#8220;The plan is doomed to fail. Why does the government keep spending money on such an impossible project?&#8221;

At the nearby Henoko Fisherman&#8217;s Association building, four women awaiting the DFAB contractors&#8217; arrival got into an argument with a plainclothes policeman.