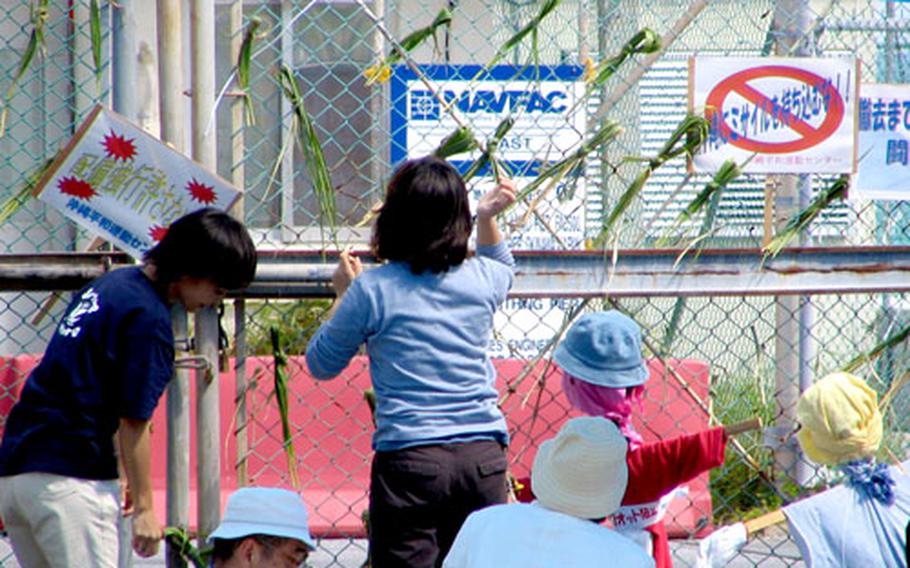 About 75 protesters continue to block the gate to Tengan Pier on Tuesday, vowing to remain encamped to prevent the transfer of Patriot missiles from a ship to Kadena Air Base. They began their vigil Sunday. The strips of grass tied to the gate are “sans,” the traditional Okinawan taboo sign to ward off evil spirits. (David Allen / S&S)

About 75 protesters continue to block the gate to Tengan Pier on Tuesday, vowing to remain encamped to prevent the transfer of Patriot missiles from a ship to Kadena Air Base. They began their vigil Sunday. The strips of grass tied to the gate are “sans,” the traditional Okinawan taboo sign to ward off evil spirits. (David Allen / S&S) 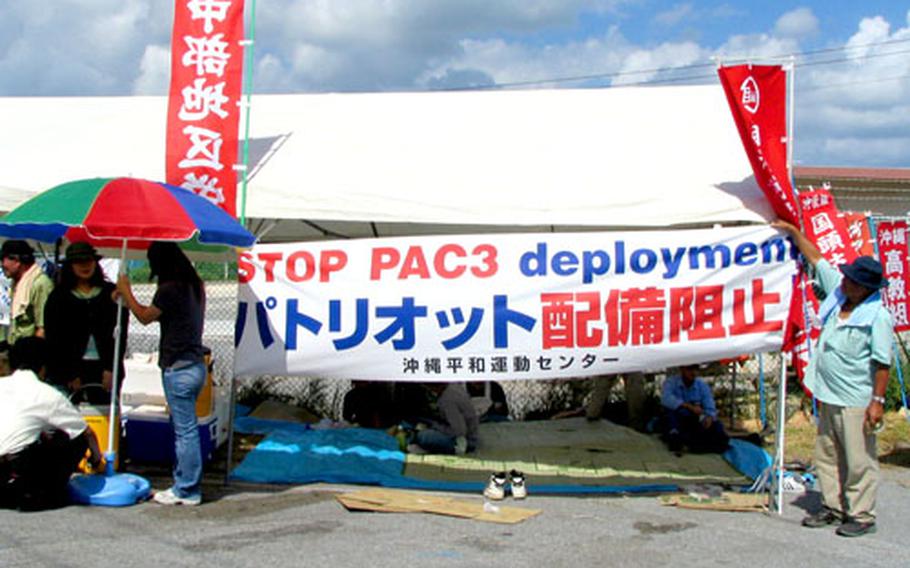 A tent set up at the entrace to tengan Pier on Okinawa by anti-military protesters. (David Allen / S&S)

URUMA, Okinawa &#8212; North Korean nuclear threat or not, anti-base activists camped out at the gate to Tengan Pier vowed Tuesday to remain until a ship leaves without unloading Patriot missiles for a new U.S. Army battery on Kadena Air Base.

Monday&#8217;s announcement by North Korea that it successfully conducted a small-scale nuclear test has given the protesters more verbal ammo to oppose the U.S. military presence on Okinawa and the deployment of the Patriot Advanced Capability-3 missile interceptors on U.S. and Japan Self-Defense Force bases.

Protesters took up their positions Sunday, and U.S. Army officials were to meet Tuesday evening with Okinawa prefectural police officials to request their removal from the gate.

&#8220;I have been asked why we would not accept deployment of the PAC-3s, especially after North Korea carried out a nuclear bomb test,&#8221; Hiroji Yamashiro, director of the Okinawa Peace Activity Center, said as he sat on a stool in the middle of the entrance to the gate, &#8220;why we would not agree now that Japan should increase its deterrence power.&#8221;

&#8220;I respond by saying that peace will come only to places where there are no military bases.&#8221;

It remained unclear Tuesday exactly what the North Koreans tested, but most world leaders feared that the communist nation led by Kim Jong Il has entered the elite club of nuclear powers.

A spokesman for Japan&#8217;s Self-Defense Agency said aircraft were sampling the air between Japan and the Korean peninsula.

&#8220;Air sampling is being conducted by Air SDF aircraft assigned to Misawa, Hyakuri in Ibaragi and Tsuiki in Fukuoka,&#8221; he said. &#8220;The first air samples were collected last night and the samples are being analyzed.&#8221;

A Kadena Air Base spokesman said he could not confirm whether any U.S. aircraft were also conducting monitoring flights.

Masaaki Gabe, an international relations professor at the University of the Ryukyus, said he doubted North Korea&#8217;s claim places Okinawa in peril.

But they could certainly embarrass the United States and heighten tensions in the Far East, Gabe said. &#8220;All the North Koreans are interested in is drawing the attention of other nations.&#8221;

Gabe said he doesn&#8217;t see the Patriot missile deployment to Okinawa as ratcheting up tensions.

The protesters at Tengan Pier are not convinced.

&#8220;We learned this during the Battle of Okinawa,&#8221; Yamashiro said of the bloodiest World War II battle in the Pacific. &#8220;Okinawa was a fortress for mainland Japan and the battle cost more than 200,000 lives. During the battle, U.S. forces landed on islands where the Japanese military were. The islands with no military were left intact.

&#8220;The presence of the military on Okinawa must be reduced so that we can send a clear message to our neighbors that Okinawa is not an aggressive military island,&#8221; he said.

Natsume Taira, pastor of the Ufuzato Church of the United Church of Christ in Japan, said the missiles would embolden the United States and Japan to become more aggressive.