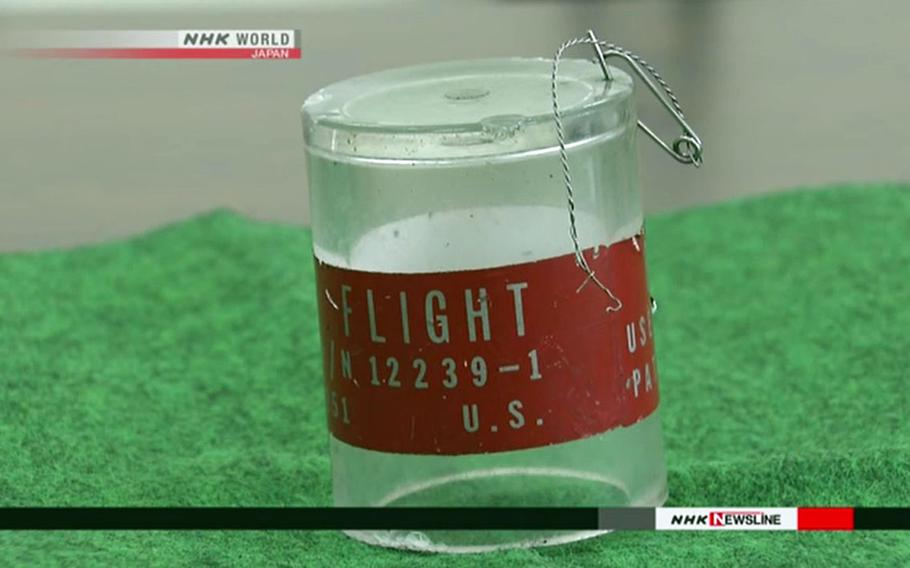 This image from a report by Japanese broadcaster NHK shows an object that reportedly fell onto the roof of a day care center on Okinawa. (Screenshot from NHK)

CAMP FOSTER, Okinawa — Okinawan protesters took to the streets Thursday night after a part that may have come from a U.S. military aircraft fell from the sky and landed on the roof of a day care facility in Ginowan City.

About 100 protesters from various civic groups staged a rally in front of the Marine Corps’ Camp Foster, which serves as headquarters for the U.S. military on Okinawa. “Don’t fly U.S. military helicopters!” they chanted, according to Japanese public broadcaster NHK.

The demonstrators were responding to reports that a plastic cylindrical aircraft part measuring 9.5 cm long, 7.5 cm in diameter and weighing less than half a pound landed on the day care’s roof shortly before the incident was reported to police at approximately 10:20 a.m. Thursday, a Ginowan police spokesman said.

The day care — which is about 300 meters from Marine Corps Air Station Futenma’s fence line — was in session at the time, but there were no injuries and no damage to the building, the spokesman said.

It is believed that the part came from a American military aircraft because it says “U.S.” on it along with other English phrases like “remove” and “use to reset,” according to police and media reports.

“We take this report very seriously and are still actively investigating this incident working closely with local authorities,” Marine 1st Lt. Karoline Foote, a spokeswoman from the 1st Marine Aircraft Wing, said Friday in an email to Stars and Stripes. “We care deeply about the safety of our friends and neighbors in the communities around which we live and operate.”

Officials from the Okinawa Defense Bureau, the local arm of Japan’s Ministry of Defense, declined to comment Friday because they were still awaiting confirmation from their U.S. counterparts, a spokesman said.

Okinawa Gov. Takeshi Onaga has called for a thorough investigation and for Japanese government officials to strongly urge the U.S. military to stop flying the CH-53E Super Stallion helicopter, which he believes was involved in the incident.

“Even though there has not been reports of injuries, one wrong move could have led to a serious accident that could have affected people’s lives,” he wrote Friday in a letter addressed to the Foreign Ministry and Okinawa Defense Bureau officials.

The prefecture “strongly urges the U.S. military to halt the flight of aircraft such as CH-53Es until the facts involved are made clear,” he added.

On Dec. 3, personnel at Yokota Air Base in western Tokyo discovered that a part was missing from an aerial flare that had been affixed to a C-130J Super Hercules cargo plane, 374th Airlift Wing officials said in a statement Friday.

The aircraft had departed Yokota on the morning of Dec.1 and made stops at Misawa Air Base, Japan, and Osan Air Base, South Korea, before returning to Yokota the next evening.

“It is unknown when or where the piece went missing and the C-130J’s flight path was mostly over the ocean,” officials said.

Airfield sweeps at Yokota, Misawa and Osan did not find the missing part, which is about 12 to 13 inches long and weighs just under a third of a pound, officials said. The part contains hazardous material and shouldn’t be picked up or touched, although it poses no risk if it isn’t disturbed.

“Aerial flares are inspected before they are affixed to aircraft and then again prior to and following every flight,” the statement said. “Any abnormalities are addressed immediately.”

Tokyo Shimbun — a Japanese newspaper — reported that Tokyo and six other Japanese cities and towns have complained about the incident. Local governments also complained about missing parts from Yokota aircraft in June and July, the report said.