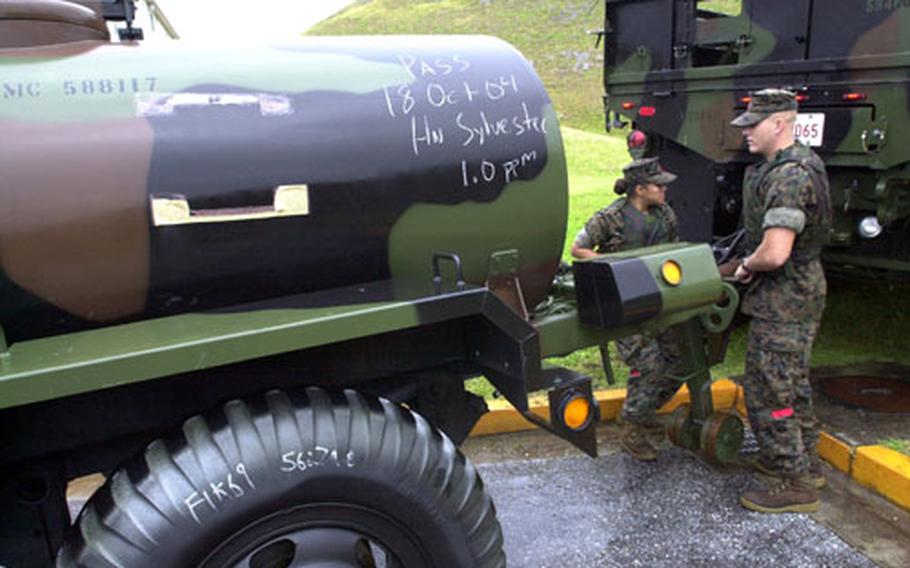 As Typhoon Tokage nears Okinawa, Pfcs. Lesli Espinoza, left, and Chris Blair, both from 3rd Tranportation Support Battalion, place a water bull in a barracks parking lot to prepare for the storm. Espinoza said the Marines begin to fill the water tanks when the base goes into Typhoon Condition 3. (Fred Zimmerman / S&S)

CAMP FOSTER, Okinawa &#8212; Packing wind gusts of up to 150 mph at its center, Typhoon Tokage took dead aim at Okinawa, threatening a Tuesday shutdown of all outdoor activity on U.S. bases on the island.

Tokage soon may be followed by Nock-Ten, which developed into a typhoon overnight Sunday southeast of Guam and is expected to pass south of the Marianas Islands, then track northwest toward Okinawa.

If they stay on course, they&#8217;ll become the eighth and ninth storms to either threaten or hit Okinawa in 14 weeks. The storms are the 27th and 28th of the northwest Pacific&#8217;s typhoon season, an unusually high number, according to 1st Lt. John Hurley of Kadena Air Base&#8217;s 18th Weather Flight.

If it continues on its present course, Tokage&#8217;s closest point of approach is forecast to be 20 miles west of Kadena Air Base at midnight Tuesday, with sustained winds of 86 mph and gusts up to 104 mph, according to 18th Weather Flight and Joint Typhoon Warning Center projections.

Tokage then is forecast to turn gradually northeast and head toward Kyushu Island, lose strength rapidly, and pass well to the east of Sasebo Naval Base and Iwakuni Marine Corps Air Station in Japan.

As for Nock-Ten, a Laotian word for bird, its directional speed slowed considerably as it developed into a typhoon overnight.

At midnight Monday Guam time, Nock-Ten sat 471.5 miles east-southeast of Guam and was tracking due west at about 9 mph, packing sustained winds of 98 mph and gusts up to 121 mph at its center.

If it continues on its present course, Nock-Ten will pass 30 miles south of Naval Station Guam and 58 miles south of Andersen Air Force Base at 1 p.m. Wednesday, with sustained winds of 127 mph and gusts up to 155 mph.

Nock-Ten then is expected to turn northwest, pick up directional speed and take aim at Okinawa. But it is expected to be well to the southeast by Saturday, perhaps sparing the island yet another weekend of blustery, wet weather &#8212; a common occurance over the past 3&#189; months.

&#8220;It&#8217;s too early to tell. It could change,&#8221; Hurley said, adding that a low pressure center moving off of China, which will steer Tokage northward after it reaches Okinawa, also will push Nock-Ten away from the island.