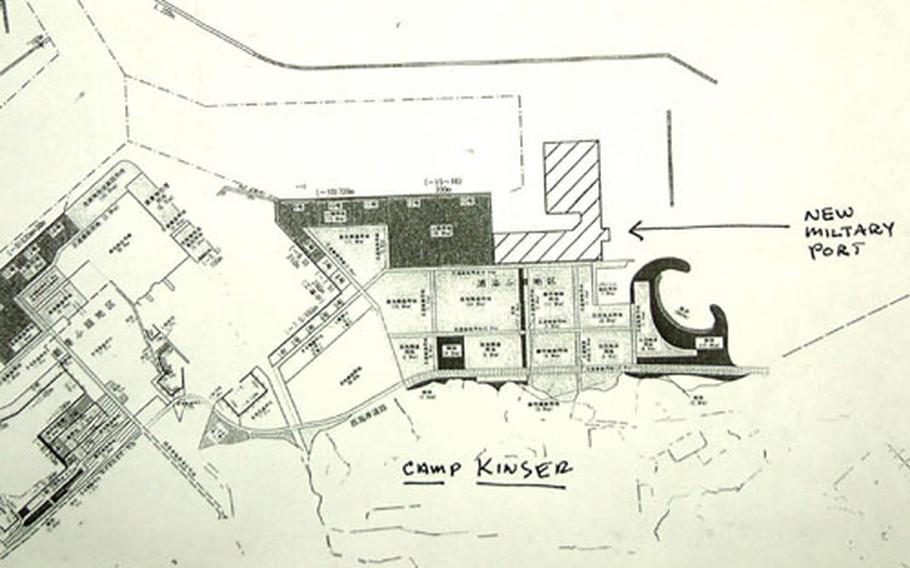 URASOE, Okinawa &#8212; A new U.S. military port here, blocked for years by disagreement about where to locate it, has moved a step closer to construction.

A local council approved the design for the new port last week. The facility will replace &#8212; and will have the same amount of berthing space as &#8212; the Army&#8217;s Naha Military Port in Naha.

The design, already approved by U.S. and Japanese governments, is an L-shaped 87-acre plot to be built on reclaimed land near the Marine Corp&#8217;s Camp Kinser. An access road will connect the base and the port area, a few blocks from what now is Kinser&#8217;s beachfront.

The Naha Military Port Relocation Council approved the design last week. Next, the United States and Japan must draft specific plans for locating berths, warehouses and other facilities, a Urasoe city official said.

The water depth will be about 39 feet, the plans show.

Land reclamation for the military port and other waterfront improvements already is under way.

The United States agreed in 1974 to relocate the military port to another site to free valuable docking and warehouse space in the prefecture&#8217;s capital.

But U.S. and Japanese officials could not agree on an new site until 1996, when the the two nations announced a bilateral plan to return to Okinawa about 21 percent of the land the U.S. military uses on the island.

U.S. bases cover about one-fifth of Okinawa and account for 75 percent of the land used solely for U.S. bases in Japan.

The plan still was blocked by Urasoe Mayor Kenichi Miyagi, who said his city already hosted Camp Kinser. He flipped on the issue in 2000, when Tokyo promised more money for waterfront improvement.

However, Miyagi changed his stance again during his 2001 re-election bid, hoping to keep the Social Democratic, Social Mass and Communist parties&#8217; support.

Instead, his flip-flops irritated all sides; pro-base candidate Mitsuo Gima won in a vote seen as a referendum on the port issue. He quickly joined Naha Mayor Takeshi Onaga and Okinawa Gov. Keiichi Inamine to form a council to plan the relocation.

Uchima said the Camp Kinser access road has not been designed but to avoid interfering with other port activities, could be either a tunnel or an elevated road.

&#8220;Our mayor&#8217;s promise to the people,&#8221; he said, &#8220;was that any new military port would not be more than what the Naha Military Port is, meaning that no nuclear submarines or carriers would use the port and the shipping of munitions would not take place.&#8221;

Developing the waterfront is crucial for the city&#8217;s economic health, Uchima contended.

In another military base issue, Tokyo announced the return of 106,000 square meters of Camp Hansen land to build a highway bypass in Onna, a northwest coastal village.

The land return also is part of the 1996 agreement to reduce and consolidate U.S. base property on Okinawa. The 3.17-mile bypass, to be completed by 2006, is to ease Highway 58 traffic congestion between Seragaki and Minami Onna villages.