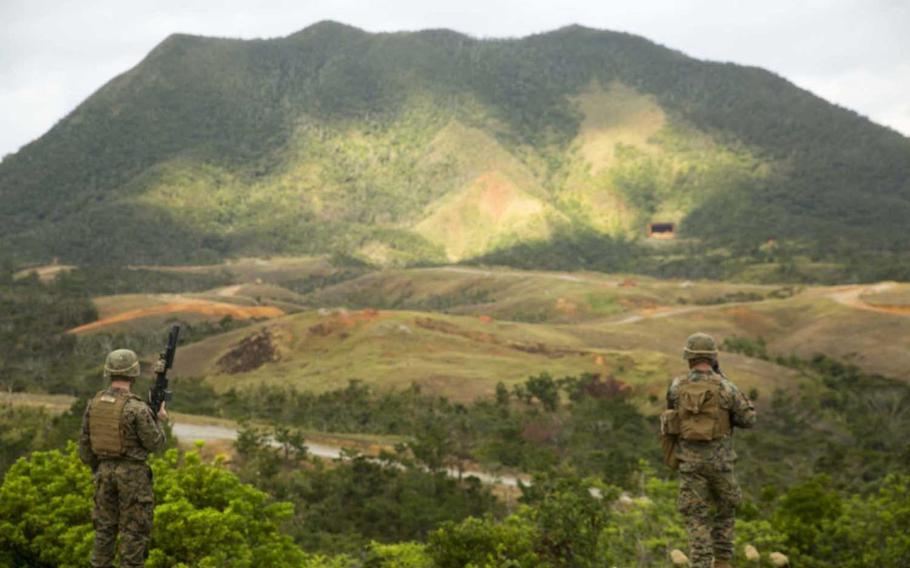 Range 10 on Camp Schwab, Okinawa, pictured on Dec. 17, 2014, is approximately half a mile from a farm where a stray bullet was found. (Isaac Ibarra/U.S. Marine Corps)

CAMP FOSTER, Okinawa — Politicians in Japan’s southernmost prefecture want a U.S. general and other troops charged with attempted murder over a June 21 incident in which a bullet allegedly strayed out of a Marine Corps firing range and struck a farm shed.

A criminal complaint was filed Monday with the Okinawa Prefectural Police in Naha by nine legislators – led by Kantoku Teruya, who represents District 2 of the Okinawa House of Representatives, Ginowan City, Chatan and Kadena Town.

It seeks to charge III Marine Expeditionary Force commander Lt. Gen. Lawrence Nicholson, Camp Smedley D. Butler’s headquarters and support battalion commander Col. William DePue and a group of unidentified Marines who were training at the time of the incident with destruction of property and attempted murder.

“This incident happened in Japan, and on Japanese soil; we should be able to apply Japanese law and bring justice,” said Ichiro Miyagi, a member of the Social Democratic Party and one of the complaint’s nine signatories.

Police have a few days to determine whether there is enough evidence to pursue the case. They declined to comment Thursday.

Marine officials could not be reached for comment Thursday afternoon.

The alleged shooting incident occurred sometime between 11 a.m. and 12:30 p.m. June 21 in Sukuta, Nago, according to Japanese police. A mango farmer told authorities he had come home from shopping to discover two broken windows in his shed and a 2-inch-long bullet on the floor.

Officials from Japan’s Okinawa Defense Bureau have said that the range was in use at the time of the alleged incident. In the aftermath, the Marine Corps vowed to cooperate in any investigation and temporarily shuttered the range.

Police conducted ballistics testing on the bullet and determined it had been fired, a police spokesman said. They attempted to match it with bullets fired from Camp Schwab’s Range 10, which is approximately a half mile from the farm, however, the investigation stalled when the Marines did not respond to requests for assistance.

The lawmakers hope the complaint will force police to conduct a more thorough investigation and compel Marine participation.

Teruya believes that the Status of Forces Agreement or SOFA that covers U.S. forces in Japan will be the complaint’s greatest hurdle. But if it fails to progress past the police, it will show the agreement’s unfairness, he said.

The SOFA states that the Japanese have jurisdiction “with respect to offenses committed within the territory of Japan and punishable by the law of Japan.” Americans accused of crimes are routinely tried in the Japanese courts but it is unclear if the stray bullet incident would qualify for the charges leveled.

The law regarding attempted murder in Japan states that intent usually must be present to qualify for conviction, however, the bar can also be met if there was a “plan or high risk of causing death to the other party.”

The SOFA states that operations by U.S. forces “shall be carried on with due regard for the public safety,” and the U.S. shall assist in any inquiries and the collection of evidence.

“It will be very hard to go beyond the SOFA rules but I want everyone to understand how unfair the rule is to Japan,” Miyagi said.

Teruya’s complaint states that U.S. forces have known about the danger of the range for some time and there have been “many” similar incidents and that the Marines have neglected to close down the range at great risk to local lives and property.

There have been 28 stray bullet incidents since Okinawa’s reversion back to Japanese control in 1972, according to the Okinawa Times newspaper.

The Marines temporarily shut down ranges in April of last year after bullets struck a vehicle and a water tank at a construction site on Camp Hansen.