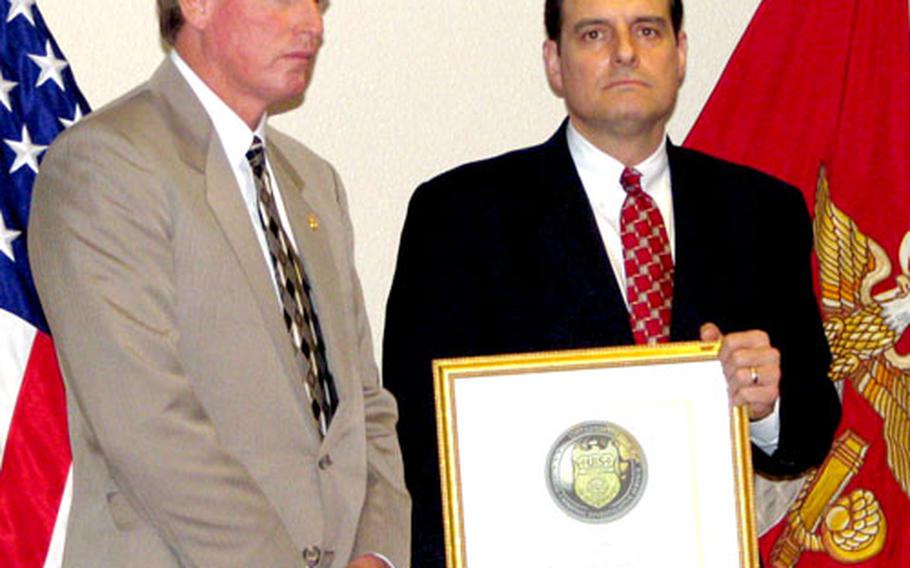 Thomas A. Betro, right, director of the Naval Criminal Investigative Service, presents the agency’s first-ever Meritorious Unit Citation to Kevin Naylon, resident agent in charge of the NCIS Okinawa Resident Agency. The award was for the agency’s quick work in solving the murder of a Navy dental technician on Camp Hansen last year. (David Allen / S&S)

The Okinawa Resident Agency on Camp Foster won the unit citation for quickly solving the murder of Seaman Adam J. Palecco, a Navy dental technician whose body was found stabbed and almost decapitated in a Camp Hansen drainage tunnel on Feb. 4, 2005. &#8220;No weapons were found, nor any evidence to identify any suspects,&#8221; reads the award citation.

The entire NCIS Okinawa office responded, the citation states. With close cooperation among Marine Corps prosecutors, the Far East medical examiner, provost marshal and others, &#8220;within days &#8230; a motive and four suspects had been identified and substantial amounts of evidence that included the murder weapons and bloodied clothes &#8230; had been recovered.&#8221;

&#8220;Admissions and confessions were obtained from each of the suspects (fellow dental technicians who were part of a shoplifting ring) and they were ultimately sentenced to prison.&#8221;

The citation called the investigation &#8220;a model for law enforcement teamwork and coordination&#8221; in solving a difficult case.

Thomas A. Betro, NCIS director, said, &#8220;Within just days, they solved a very brutal homicide. I can&#8217;t think of a more appropriate group to receive the very first unit commendation.&#8221;

Betro said he also is proud of work his agents have done in Iraq, where their tasks have expanded from at first providing protection for ambassadors and other VIPs to counterintelligence and criminal investigations. He said more than 300 agents have volunteered for Iraq duty.

On Thursday, he presented Meritorious Civilian Service Awards to special agents Douglas Robinson and Joe Kennedy for their Iraq deployments.

The award citation states the agents &#8220;conducted high-risk missions under difficult conditions and under constant fire by insurgents.&#8221;

Also receiving awards Thursday were Masaki Tanahara and Kunio Kiyan, technical investigative assistants. Tanahara, who has taken part in thousands of investigations over a 30-year career with NCIS, was cited for his close work with Japanese law enforcement agencies. Betro cited Kiyan for &#8220;greatly enhancing our mission in the Far East.&#8221;