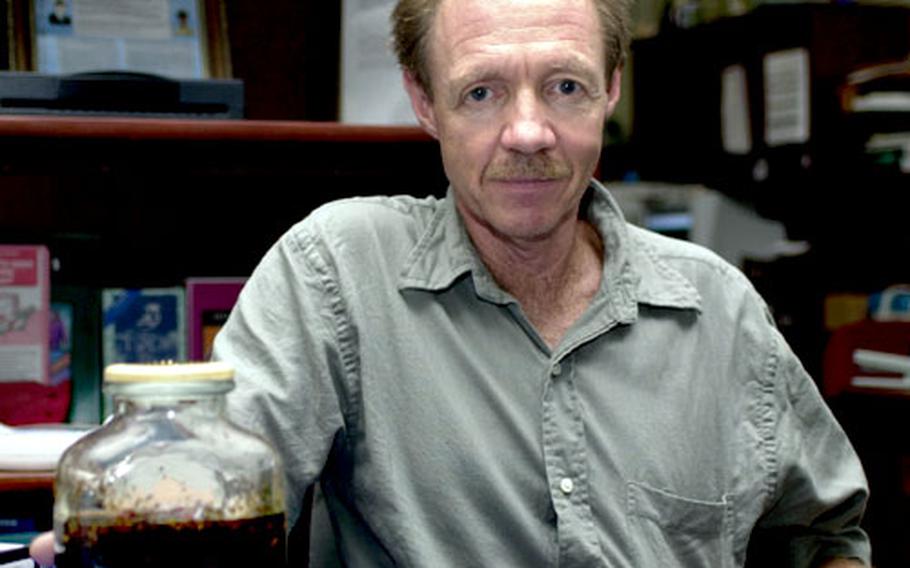 Dave Elger, the Health Promotions Department head for U.S. Naval Hospital Okinawa, holds a jar that contains the amount of tar a smoker would take smoking one pack of cigarettes every day for a year. (Fred Zimmerman / S&S)

CAMP LESTER, Okinawa &#8212; Want to kick the smoking habit? This may be the day to begin: U.S. Naval Hospital Okinawa is staffing a &#8220;Smokeout Hotline&#8221; in conjunction with the American Cancer Society&#8217;s 27th Annual Great American Smokeout today.

Elger said the department also will offer nicotine gum to help abstaining smokers get through the day.

And while giving up smoking for a day is better than continuing to smoke, he said, he focuses more on the long term. &#8220;I recommend to cut back usage &#8212; maybe in half &#8212; and then work on quitting. My focus is on cutting back permanently and use that as a springboard to quit permanently.&#8221;

To try stopping the problem where it often starts, Elger said, he and his staff have talked to Kubasaki High School ninth-graders this week &#8212; 90-minute presentations he said they try to make interesting. For instance, he just came up with a &#8220;Tobacco Jeopardy&#8221; game. One category is based on how celebrities advertise smoking. He then points out celebrities who have died from cancer.

It might be working, Elger said: Many of those who attend smoking cessation classes say their kids pressured them to quit.

Since January, 418 people have taken the department&#8217;s five-week smoking cessation class. Elger said the classes try to help people avoid cigarettes and smokeless tobacco by offering nicotine replacement products such as gum or patches. Instructors also teach the dangers of tobacco and how to get relief from withdrawal symptoms, Elger said. The classes also address smoking triggers, lifestyle issues and nutrition, because weight gain often is a concern for those quitting.

For one smoker, talking about quitting and making good on the decision is easier said than done.

For more information on how to cut back or quit nicotine for the day, or permanently, call the Smokeout Hotline at 645-2620/2578.