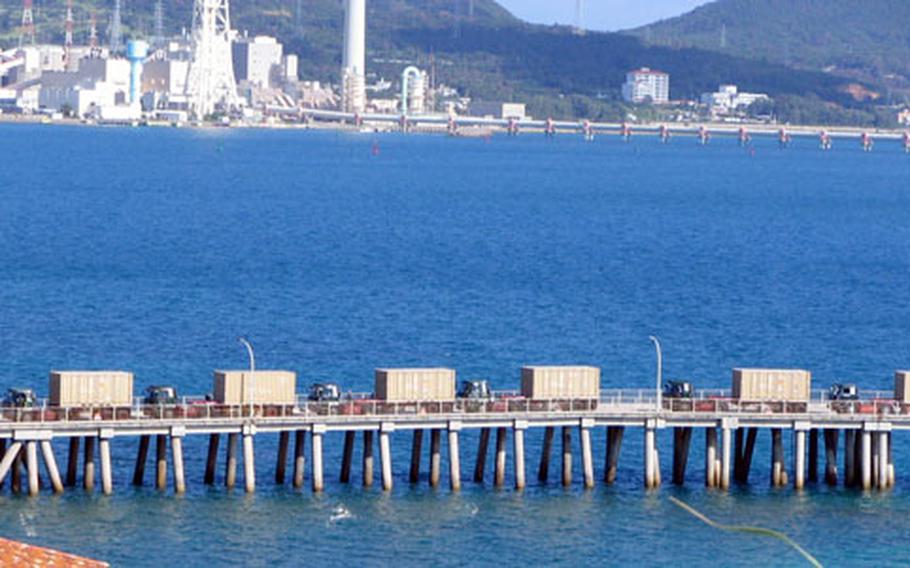 URUMA, Okinawa &#8212; Okinawa police early Wednesday peacefully removed some 80 protesters from their encampment in front of the gate to Tengan Pier, allowing the transfer of Patriot missiles to Kadena Air Base.

The break-up of the camp, established Sunday night to protest delivery of Patriot Advanced Capability-3 missile interceptors to a new U.S. Army site on Kadena Air Base, took about five minutes, a police spokesman said. Police at the site Wednesday outnumbered protesters by more than 2 to 1.

&#8220;Upon the request of U.S. military, Okinawa prefectural police sent special riot police to Tengan Pier to remove the protesters from the exit,&#8221; a police spokesman told Stars and Stripes. There were no reports of injuries.

A line of riot police stood shoulder-to-shoulder in front of the gate while others herded the protesters to a narrow sidewalk, where they stood shouting anti-war slogans as the cargo ship unloaded 10 shipping containers. Trucks hauling the containers left the port about 9:30 a.m. without further incident.

Washington and Japan signed an agreement last May to deploy the missile interceptors to existing U.S. bases in Japan. Two dozen PAC-3s are to be set up on Kadena Air Base and manned by about 600 U.S. Army personnel from Fort Bliss, Texas.

The request to keep protesters from blocking the gate was made to Okinawa police Tuesday evening by the Army&#8217;s 10th Area Support Group at Torii Station.

In response to the demonstration, U.S. Consul General Kevin Maher in Naha said he respected the right of Okinawans to protest.

&#8220;At the same time,&#8221; he said, &#8220;we would like to stress that the PAC-3s are being deployed in Okinawa in order to enhance our capability to meet our commitment to the defense of Japan, with recent events aptly demonstrating the need for missile defense.&#8221;

The protesters contend the installation of the PAC-3 missiles at Kadena, the largest U.S. air base in the Asia-Pacific region, makes Okinawa an even greater target for hostile forces.

U.S. and Japanese government officials say the interceptors are needed to defend Japan from attack from North Korea, which is expanding its missile capabilities and Monday increased world tensions by announcing it successfully tested a nuclear weapon.

Wednesday&#8217;s police action was against the wishes of Tsuneo Chinen, the mayor of Uruma, where Tengan Pier is located. On Tuesday he filed a protest with the Naha bureau of Japan&#8217;s Defense Facilities Administration Agency, demanding the cargo vessel berthed at the pier leave without unloading the missiles.

Koichi Tokuyama, councilor for the city&#8217;s Planning Office, said Chinen was opposed to basing the missiles on Okinawa.

&#8220;He asked the military to bring the missiles back to the United States without unloading them here,&#8221; Tokuyama said.

The protesters were surprised by the quick police action.

&#8220;We knew this would happen sooner or later, but it was much sooner than we had thought,&#8221; said Natsume Taira, a pastor and a peace advocate. &#8220;This incident tells us that Okinawa will grow into a permanent military island if the people of Okinawa remain mute.&#8221;