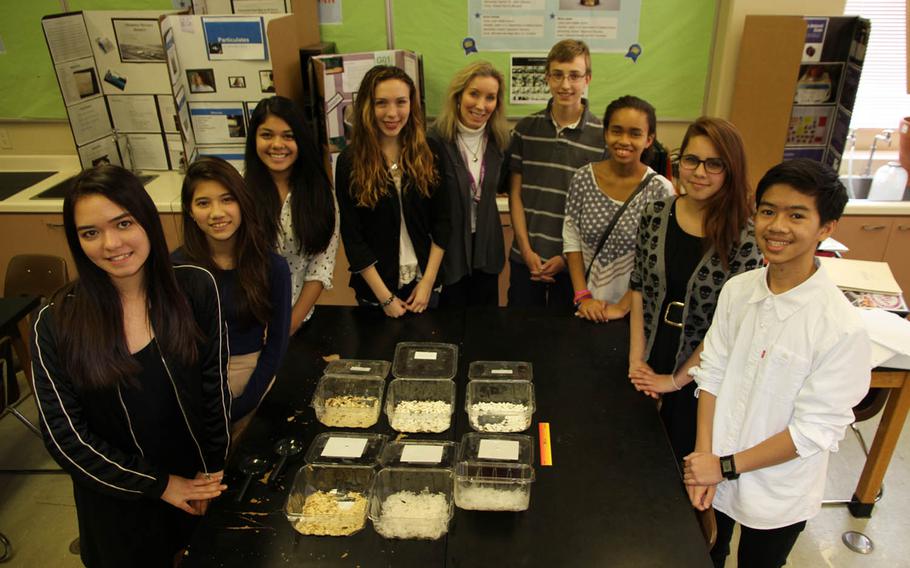 CAMP FOSTER, Okinawa — Science experiments by U.S. middle-school students in Japan could have major implications in stemming the tide of a major source of seaborne pollution.

Eight classmates from Lester Middle School at Camp Lester on Okinawa used mealworms and darkling beetles — the worms’ adult form — to successfully biodegrade petroleum-based polyethylene plastic shopping bags and polystyrene Styrofoam. The fecal byproduct of the experiment, which was performed in Maryanne Tirinnanzi’s eighth-grade science class, was nontoxic, they said.

The students say it’s the first time that such an experiment has been performed successfully.

“This could revolutionize our world,” said student Cecilia Braud. “It’s important to us because we see Styrofoam and plastics everywhere.”

The students got the idea for the project after Tirinnanzi read them an article about a study released last year by Stanford and Beihang (China) universities that found mealworms could successfully and safely biodegrade Styrofoam.

“We thought, ‘Why don’t we try using plastic grocery bags instead?’” student Lexus Haight said. “We thought it would work.”

Student Peter Gillen added: “Styrofoam is similar to plastic in many ways. This seemed like a better idea.”

Americans generate 30 million tons of plastic waste each year, only 7 percent of which ends up in recycling centers, according to the Environmental Protection Agency figures from 2008. The rest ends up in landfills or the ocean. For example, one study estimated that the Danube River, for example, transports 4.2 metric tons of plastic into the Black Sea each day.

The environmental activist group Greenpeace claims that a plastic rubbish pile larger than the size of Texas floating in the North Pacific is choking and trapping millions of fish and animals.

While efforts are underway to reduce the consumer’s use of plastics, others are looking for ways to get rid of those already in the environment.

That’s where the mealworms come in.

Mealworms have microorganisms in their intestinal tract that allow them to process the petroleum distillates in plastic grocery bags, Gillen said.

But Tirinnanzi was skeptical. She thought the leftover waste might be too toxic.

They were amazed by what they saw.

“They ate the oats first, but then they went on to the plastic,” Gillen said.

The 50 worms/beetles ate more than 2,000 milligrams of plastic — a hole roughly the size of a nickle — in two months, he said. And the insects that ate the plastic were fatter and more active than the ones that ate only oats.

Most importantly, no toxins were found in their feces, according to the Stanford findings.

The students are in the process of submitting their findings to Harvard University’s Journal of Emerging Investigators for peer-review in the coming weeks. The journal was established to specifically publish the science works of middle school and high school science students, Tirinnanzi said.

The students were meticulous when conducting the experiment, she said.

“We kept all variables strictly the same and conducted the experiments over time to the highest standard,” said Tirinnanzi. “There was no guessing, every measurement was exact and replicated to ensure valid data.”

Students Noah Buenaobra and Melody Seiber said they hope their research will be used by industrial-sized facilities in municipalities, restaurants and schools all over the world. In schools, students could use the operation as a teaching tool while helping to clean up the environment, and

Student Iris Frilles added that the feces could then be used for fertilizer and the insects could be consumed, as they already are in some Asian countries, and in pet food.

Frilles said she envisioned personal recycling in homes, as well.

Although it would take a lot more worms: Tirinnanzi estimates it would take 50 worms about eight months to consume one shopping bag.

Tirinnanzi beamed as she watched her students work.

“They’re changing the world,” she said. “We’re so excited.”