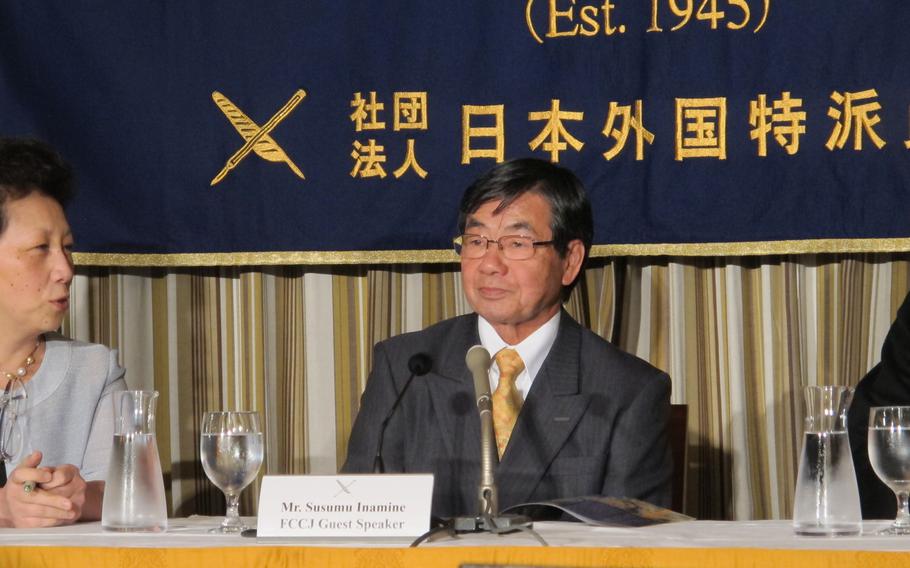 Nago Mayor Susumu Inamine talks with reporters in Tokyo on Feb. 13, 2014. Inamine, who is steadfastly opposed to building a replacement facility for Marine Corps Air Station Futenma in his city, won re-election in January despite opposition from Japan's ruling party. Inamine's opposition could complicate efforts by both the United States and Japan to move the controversial helicopter base. (Erik Slavin/Stars and Stripes)

Nago Mayor Susumu Inamine talks with reporters in Tokyo on Feb. 13, 2014. Inamine, who is steadfastly opposed to building a replacement facility for Marine Corps Air Station Futenma in his city, won re-election in January despite opposition from Japan's ruling party. Inamine's opposition could complicate efforts by both the United States and Japan to move the controversial helicopter base. (Erik Slavin/Stars and Stripes) 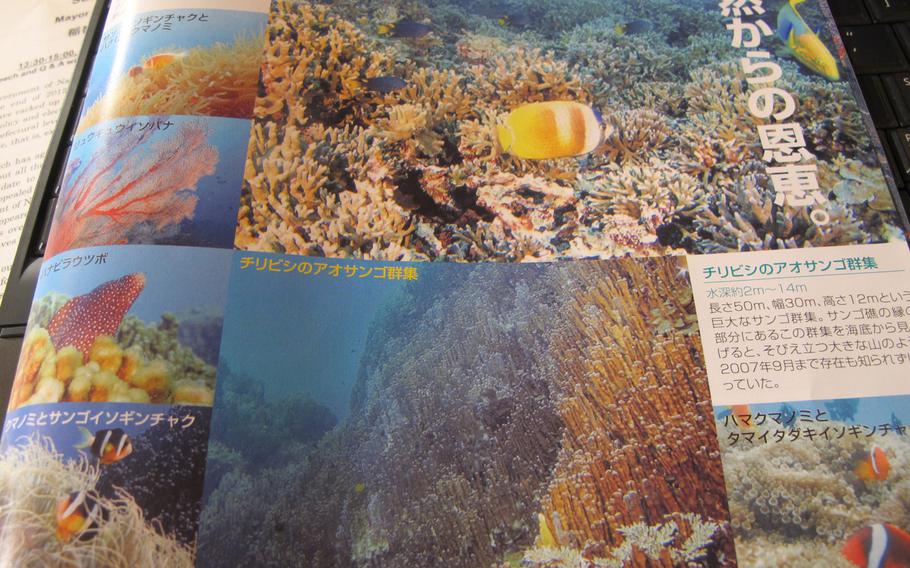 A brochure presented to the media in Tokyo on Feb. 13, 2014, by Nago Mayor Susumu Inamine portrays the waters near Henoko, where the U.S. and Japan have agreed to relocate a Marine helicopter base, as a tropical paradise. (Stars and Stripes)

TOKYO — The mayor of a small city in Okinawa took his case to the world media Thursday in Tokyo, portraying the plan to build a Marine base there as one that fosters destruction of an ecological paradise and undermines democratic values.

Nago Mayor Susumu Inamine vowed to fight the relocation of Marine Corps Air Station Futenma to his city’s rural Henoko district, which is one of the first steps in a major realignment of thousands of U.S. servicemembers in the Pacific.

Inamine faces an uphill battle. The United States considers the agreement to move the base final, and even Inamine said Thursday that the Japanese government “has not swayed in its resolve” to build it.

He indicated he plans to combat the plan with a mix of world appeals and local red tape, according to several of his comments.

“There are management areas where the mayor of Nago has certain authority and rights,” Inamine said at a news conference. “I will be upfront about this. If different people come to me and say, ‘We need permission for something,’ if the premise is that they are going forward with this construction, then I will be uncooperative.”

The two governments first talked in 1996 about moving Futenma from what was once a rural area but is now urbanized. A helicopter crash in 2004 at a nearby college intensified Okinawan protests to move the base off the island entirely.

Moving the helicopter base off the island would separate the Marines based in Okinawa from their transportation. The U.S. considers the island strategically significant because of its proximity to Taiwan and Southeast Asia. It is also within reach of the Korean Peninsula by air if additional forces were needed there quickly.

Inamine disputed that reasoning Thursday, saying that basing more than half of U.S. servicemembers in Japan on the island of 1.4 million people was more about NIMBY — short for Not in My Backyard — on the part of mainland Japanese.

“Deterrence, geographical advantageousness — all of these arguments just no longer work,” Inamine said. “I simply think it’s a political decision. No one else in Japan wants these facilities.”

Inamine spoke for about 40 minutes with foreign and Japanese reporters, followed by about an hour of questions. He distributed color brochures featuring underwater photos that make the waters off Henoko look like a wonderland of coral and marine life. The material also included locations of the military’s helicopter crashes over several years and a timeline of the Futenma issue, which began with the 1995 rape of an Okinawan girl by three U.S. servicemembers.

“If they try to force this issue in Okinawa, then they will invite criticism from all over the world,” Inamine said.

The Japanese government’s ruling Liberal Democratic Party did everything it could to defeat Inamine in the January mayoral election. It sent national Diet members to campaign on behalf of opponent Bunshin Suematsu and offered sizable government grants to the area.

Inamine said the national government’s continued resolve to build the base amounts to a repudiation of democratic values, in light of his victory. However, he said he would continue to lobby U.S. officials. He met with the U.S. Ambassador to Japan, Caroline Kennedy, during her trip to the island last week, and said he planned to visit Washington sometime after April.

Inamine said he did most of the talking during the meeting with Kennedy but that she listened intently to his viewpoints.

“She expressed a great deal of interest in the environmental issues,” he said.