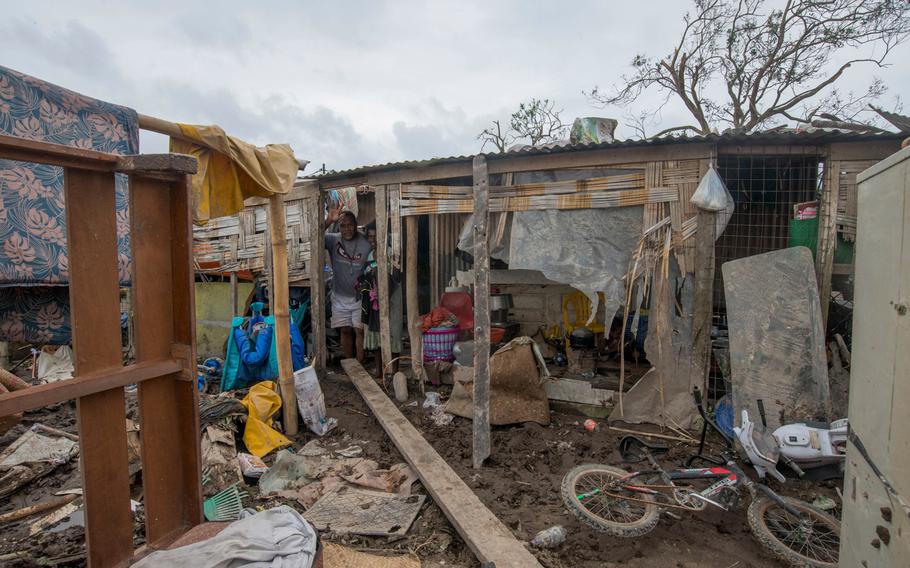 In this March 15, 2015, photo provided by UNICEF Pacific, residents stand inside damaged house after Cyclone Pam struck Mele village, on the outskirts of the capital Port Vila, Vanuatu. (UNICEF Pacific via AP)

YOKOTA AIR BASE, Japan — Commanders have directed Okinawa-based Marines to be ready to support cyclone relief operations in Vanuatu.

U.S. Marine Corps Forces, Pacific spokesman Chuck Little said Wednesday that the III Marine Expeditionary Force had been told to be prepared to provide a Forward Command Element Humanitarian Assistance Survey Team to the island nation decimated by Cyclone Pam, one of the most violent storms on record.

Vanuatu, an archipelago of 65 islands between Australia and Hawaii, is struggling to recover from Pam, which packed 168-mph winds when it roared ashore last week, causing widespread damage and flooding.

If there is a request for U.S. military support, the Marine Corps team would help determine what would be required and how it could be provided, Little said.

Dave Polatty, a professor at the U.S. Naval War College, said personnel from the U.S. Agency for International Development’s Office of Foreign Disaster Assistance are assessing the damage in Vanuatu.

“My gut tells me that, based on the size of the island chain, the distances are significant enough that I suspect navies from numerous nations will be involved,” he said. “I will be surprised if the U.S. military doesn’t send some capabilities to assist in the relief effort.”

Vanuatu was a base for the allies fighting Japan in the Pacific during World War II, Polatty said, adding that most of the country’s 267,000 residents would have been affected by the storm.

“The next 72 hours will be telling in regards to additional military capabilities that may be required for lift, access to the outlying islands and general life-saving relief,” he said.